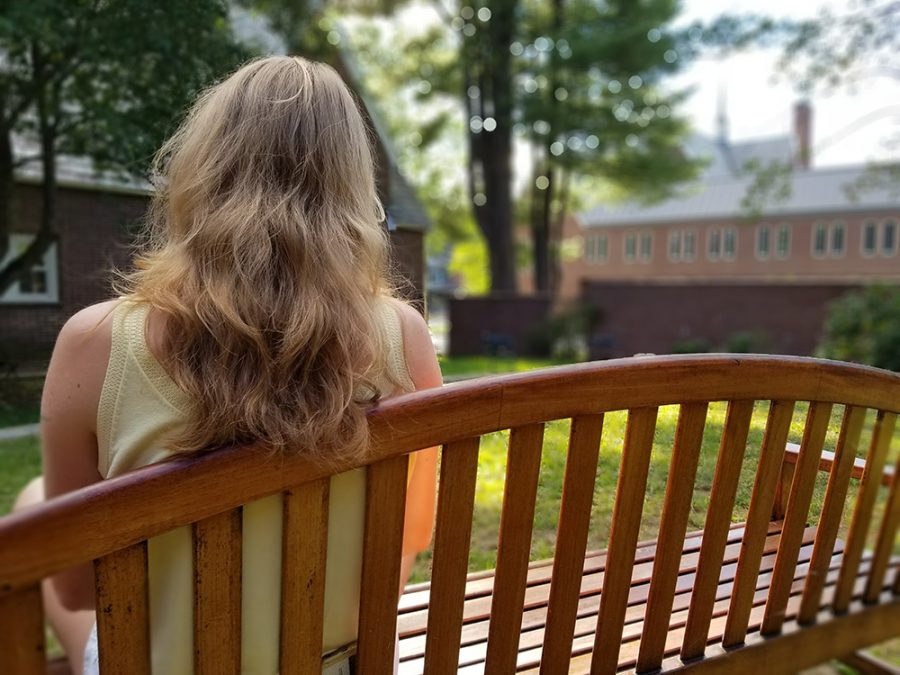 A quarantined student sits on a bench in the Muskie Garden after receiving approval to go outside.

All student names in this article have been changed to protect the identity of the student who tested positive.

On the morning of Friday, Aug. 28, Stella and Annabel woke to a knock at their door and a voice asking them to answer the phone.

Annabel received a call from Health Services informing her that she had tested positive during entry testing and would be moved to isolation housing shortly. The caller also asked for names of students she had been in contact with.

“It was just fear and confusion and just ‘shit, what do I do now?’ Are we responsible for the outbreak? If the school gets shut down, is that on our shoulders?” Stella said.

Seven first-year students, including Annabel’s roommate Stella, were identified as close contacts. All were told to remain in their rooms and ask friends to bring them food.

Stella noted that while the protocol for isolated students seemed clear, the rules for quarantined students were less so at the time.

Bates has dealt with contagious diseases on campus before, most recently in 2016 with an outbreak of the mumps on campus and in response to the H1N1 virus in 2009, however the college has not faced a major pandemic of this scale.

These students would be the “guinea pigs,” as one student was told by a staff member, for Bates’ new COVID-19 quarantining procedures.

All of the quarantined students interviewed expressed frustration and confusion with the process. These students reported receiving different answers to their questions in their initial days of quarantine.

After being alerted to their new status, quarantined students received an email detailing directives, guidelines and consequences for failing to follow the rules. It also listed various people and departments the students could contact for support, including Health Services, their student support adviser, Counseling and Psychiatric Services and Campus Safety.

The email states that students must remain in their room for the full quarantine period — 14 days.

However, Stella said that the Bates contact tracer who spoke to her over the phone said she would need only a couple negative tests before being able to leave quarantine. She said he told her and her parents it would take about ten days.

Jenna and Liam, two other students in quarantine, reported similar conversations and expectations.

The students in quarantine were tested once on Aug. 31 at Health Services and told they would have to remain in their rooms for the full 14 days, regardless of the results. Most were under the impression they would be able to leave quarantine after a couple negative tests and were dismayed to learn this.

“We just feel like we’re getting so many mixed messages,” Jenna said. “It felt like, ‘oh, this might not be that bad,’ and then all of a sudden we’re like, ‘oh, so we’re going to actually have to be in here,’ because they made it sound like we would be out by tomorrow [Sept. 1] when we got our results back.”

When the results came back, each of the seven students learned they were negative for COVID-19.

“[The most challenging aspect has been] seeing everyone being so social on campus, making friends and establishing connections,” Stella said. “The weekends are the hardest because I hear everyone having fun until 2, 3 a.m. My friends will stop by my window to say hi, but social isolation is hard. Yeah, I can FaceTime people, but that’s not the same as being in close proximity.”

Stella said her time in quarantine has been hard on her mental health. She noted that she’s lucky to have a support system at Bates and home, but “it’s just easy to spiral.”

On Aug. 29, students said they were told they could go for a run by Bates Health Services. An hour later, after many had left to run, the students received an email from Abigail Alfred, Manager of Outreach and Support Services, telling them they would not in fact be allowed to leave their rooms for exercise.

This directive was later rescinded on Sept. 1, allowing quarantined students to go outside or run by themselves as they wished.

Additionally, some students said they were told over the phone that they could get their own food, despite the initial email which told them to ask for help from a friend. This was quickly corrected via email for at least one student.

This policy was similarly a point of dissatisfaction. Liam said it was challenging for him to find others to help get his food; his roommate was also one of the seven quarantined students.

“Their answer has been ‘get a friend to go get it,’” Liam said. “Well, I’ve been in college for almost a week now ‒ I moved in on Wednesday and today is Monday [Sept. 1] ‒ I’ve probably broken records for the least amount of people I met during my time at college….I don’t exactly have a lot of people I can contact to get me food.”

Each of the students in quarantine are members of varsity athletic teams at Bates, and they said that their teammates, some they hardly know, were crucial in helping to deliver food. Without this network, some commented that they would have been at a loss.

The email sent to students also stated Health Services would reach out to the students to schedule a testing appointment, however students said they were the ones who called to request tests.

“I’ve had to reach out to them most times that I wanted to speak to them,” Jenna said, referring generally to Bates employees, on Aug. 31.

Bates developed its contact tracing policies and procedures to align with guidance from the Maine Center for Disease Control and Prevention (CDC), Director of Communication Sean Findlen wrote in an email.

Six staff members at Bates are dedicated to contact tracing. All have participated in the Maine CDC Contact Tracer Training Certification program.

According to the CDC, a close contact is defined as “Someone who was within 6 feet of an infected person, regardless of whether face coverings were worn, for at least 15 minutes starting from two days before illness onset (or, for asymptomatic patients, two days prior to specimen collection) until the time the patient is isolated.”

However, one of the students quarantined said her contact with Annabel was less than 15 minutes. She was identified as a close contact after standing near the student outside their dorm for the duration of a fire alarm.

Liam said he and his roommate had only walked up to Mt. David with Annabel, more often than not standing further than six feet apart, during what he described as a brief visit lasting approximately 15 minutes.

Other students identified as close contacts reported eating meals with Annabel and spending a significant amount of time with her.

“The CDC does not differentiate between types of exposure nor does it account for source control (i.e. masking) for close contacts,” Findlen wrote. “Once an individual meets the threshold to be considered a close contact, they must quarantine for 14 days in accordance with state regulations.”

This experience would have been challenging for most students at Bates, let alone first-years new to campus. However, Stella acknowledged the difficult situation Bates was in while implementing its entry plan and working with its first group of quarantined students.

“They didn’t really have the protocol for quarantine kids set up, but now that they do, I’m confident that if any other kid has to go into quarantine after this, their situation would be a lot better than ours was,” Stella said.

The students will leave quarantine on Sept. 10-11.