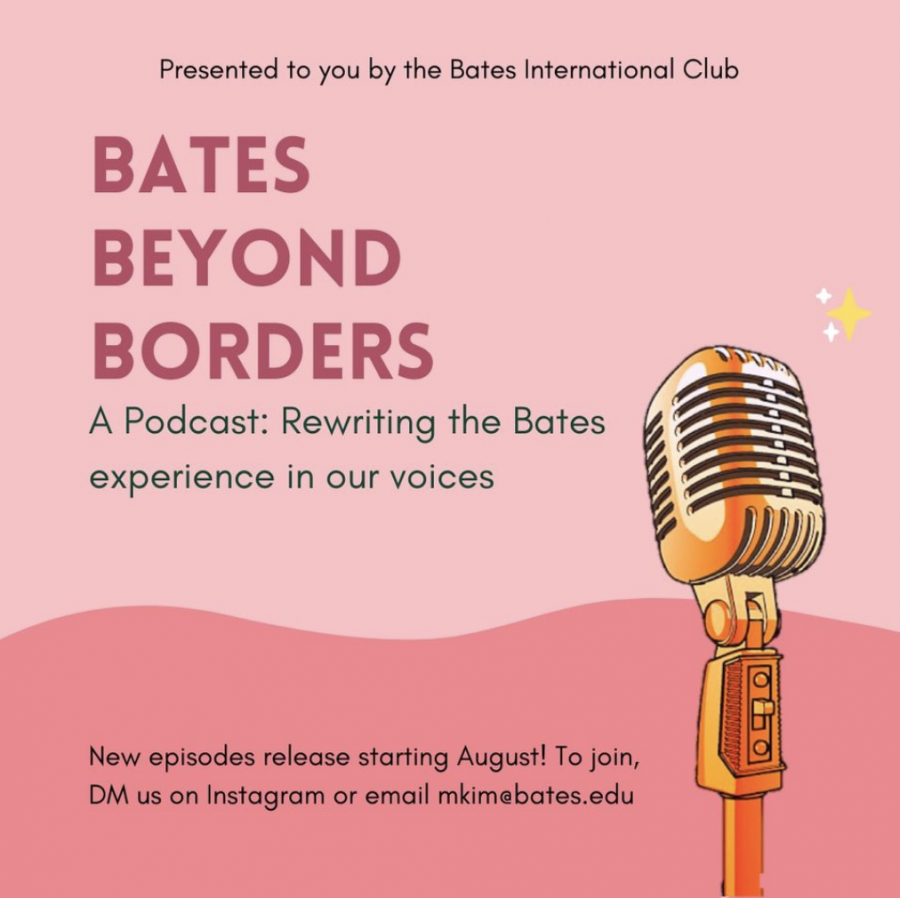 For any college first-year, the concept of starting school conjures hopes, fears, and excitement for the year to come. Adjusting to the community, tackling sophisticated academics, and taking ownership of your independence are all expected challenges for a student to take on. But what about adjusting to an entirely new culture?

Whether impactful, educational, or just downright hilarious, Bates Beyond Borders features the advice, takeaways, and thoughts of some international students at Bates with wonderful anecdotes that reflect the intricacies of American colleges’ unique norms.

In the pilot episode, titled “Our First Ever Trip to Bates,” we hear about four students’ first trip to campus and the lasting impressions that it left on them. The podcast episode was filled with engaging recounts of everything from navigating through chaotic airports to spending that first unfamiliar night in college dorms.

Something that stood out in particular, however, was the shock around the way that American students decorate their dorm rooms and pack for college. Many American college students personalize their rooms to the fullest extent, occupying their spaces with couches, TVs, walls meant to represent their personalities, and the like.

“There was no such culture of posting posters on the wall, so that was a surprise,” Kim shared, comparing her time at a boarding school in Korea to her dorm experience at Bates. “I was shocked when I got an email from my roommate asking whether or not I was going to bring a fridge.” Nicole Kumbala ‘21 added that most international students come to campus with two suitcases, starkly contrasting from the luggage-packed cars that many domestic students drive to campus.

Episode 1 is broken into two parts, both reflecting on Orientation. The first part, “All About AESOP,” covers the orientation trip experience.

AESOP is known for diving into the deep end in many ways ‒ sometimes in the literal sense when it comes to canoeing. Students are tossed into close quarters with their new peers and often get first acquainted with Maine through this deep outdoor immersion.

The participants in this podcast episode cover their experiences with each of their trips, walking us through the fun pranks and mishaps that occurred as well as the excitement of having a bonding outdoor experience. While some students were in AESOPs with students from diverse locations, others were in groups composed mainly of New England students and experienced a learning curve in hearing references to niche parts of American culture.

Podcast participant Mark Su ‘22 shared an important lesson he learned from starting school and having new experiences like AESOP: “In college, people have a better understanding of who they are, who they want to be, and who they want to be friends with. I think it’s really essential for us to show our true selves and really appreciate other people for what they show you.”

The whole act of socializing throughout orientation can pose challenges too, as international students take on cultural differences that oftentimes feel unaccounted for by the Bates community. On top of this, it was only recently that the community of international students became as unified as it is now, thanks to affinity groups on campus like the International Club; it was far more difficult at the very beginning of school to find other students with similar experiences before organizations like this.

As a domestic student listening to this podcast, I was met with the reality of how unknowingly simple it was for me to go through not only the beginning of school but also my entire time at Bates. Yes, the adjustment to college is hard, but the challenges domestics students face are challenges that are very much included in the dialogue of the Bates community and are normalized amongst other domestic first-years.

Hearing about the exponential challenge and unfamiliarity that international students face as well as the brightness, comradery, and perspectives that were discussed in the podcast was an invaluable experience. It is essential that all Bates students listen to this podcast, as Bates should serve as a united community for everyone no matter where you are from.