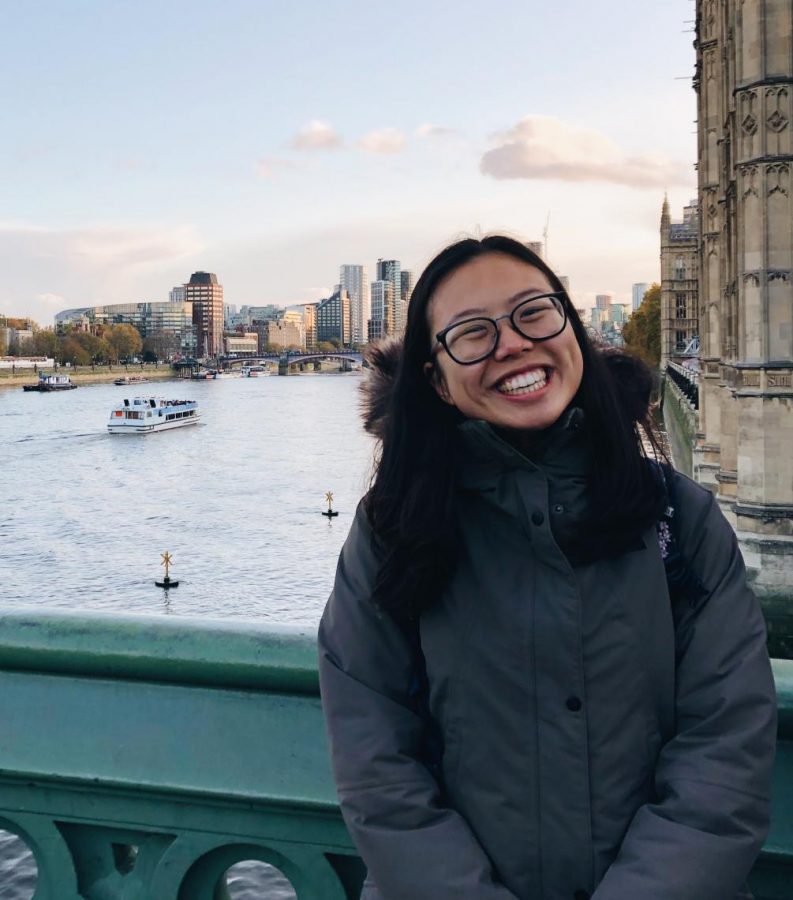 Good art touches you, but it teaches you something, too. Christina Wang ‘22 has always been drawn to how literature can serve as a jumping off point for exploring philosophy, ethics, science, and everything in between.

She began writing both prose and poetry in middle school, but since arriving at Bates has concentrated mostly on the latter. It started as a form of escapism, a way to mold a world outside of the landmine of middle school, and has since evolved into a cathartic exploration of the world. Her experiences as a Chinese-American woman growing up in predominantly white spaces are a frequent source of inspiration.

“I think part of why I love writing so much is how it allows you ‒ I don’t want to say forces you, but it does reward you for being unabashedly vulnerable,” she shared. Much of her work involves looking at her and her family’s past, examining the world through the lenses of her past self, her current self, and those around her.

The power of vulnerability has been a consistent thread in her artistry. Her high school creative writing teachers created safe spaces for creating and sharing. Looking back on her high school work, she finds most of them to be clichéd now, but regardless, she appreciates how she was encouraged and taught that “[her] words meant something and had value.”

Throughout high school, Wang participated in contests and won awards, and when it came time to apply to colleges, many encouraged her to attend the schools renowned for their creative writing programs, but the competitiveness of such programs discouraged her. Wang has known since her first-year seminar (FYS) at Bates that she had found the right English department.

Her FYS, entitled “Shaking It Out: Writing and Critiquing Personal Narratives,” was taught by Professor Jessica Anthony, a lecturer in English, who supervises the fiction side of the creative writing program. The course is rooted in creative nonfiction, a branch of creative writing that combines the factuality of nonfiction with literary techniques more frequently found in fiction.

Anthony’s class was a space that emphasized that the students, despite being young, had stories to share that people would want to hear. In workshop, writers were pushed to improve and get helpful feedback from each other; it was a supportive space to be vulnerable and open yourself up. As a first-semester freshman, the realization that these spaces existed on campus was eye-opening.

Wang now serves as an editor for Snaggletooth, the college’s literary magazine, where she hopes to spread this spirit of writing and sharing stories outside of the English department, particularly now. Writing non-academically has brought her much joy and comfort during the coronavirus pandemic, and the Snaggletooth space gives students across majors the chance to improve their writing together.

Bates’ creative writing program does not include a creative nonfiction track, so Wang has drifted fully into poetry, which has encouraged her to be more exploratory in her work and less boxed-in. She believes poetry is organically more experimental and lacks some of the rules of prose, which demands that the author create an enticing plot, developed characters, and relatable dialogue.

A recent piece she has been working on is a prose poem, a style of poetry that retains the language style of poetry, like rhyme and heightened imagery, in the prose format. It centers around herself as a child, experiencing a crush on a white boy and trips to fast food restaurants in attempts to be more American, and how she reflects back on those moments in the present day.

As a double major in English and politics, she acknowledges how using such stories as inspiration adds a political bend to her work.  In the wake of the 2016 election, Wang began to explore the intersection of politics and literature in her high school classes, reading protest poems and pieces by writers of color in reaction to the election, and found herself wanting to know more about the systems and injustices they were writing about.

Wang is also an education minor. After Bates, she hopes to become a high school English teacher and teach creative writing in particular, to pay forward the good bestowed on her by her own teachers. Poetry is always going to have a major role in her life, as writing continues to be a way of escapism and catharsis, no matter how far away she gets from her middle school days.

Check out her work in Snaggletooth: