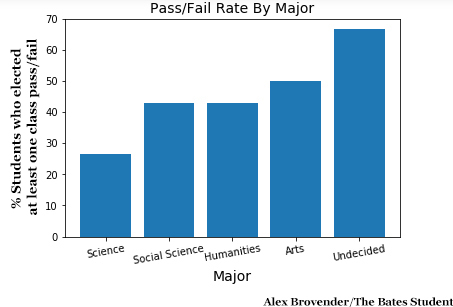 On May 18, The Bates Student emailed a survey regarding the elective pass/fail grading system to all students registered for the 2020 winter semester.

This grading system was instituted after students departed from campus in March due to the coronavirus pandemic. Students were given the option to elect pass/fail up until May 5 in light of the extraordinary circumstances surrounding the winter semester.

In total, 348 responses were analyzed in this survey. Most students praised the implementation of the elective pass/fail grading system, with many noting that the “safety net” helped reduce stress.

“The pass fail grading system gave me a great safety net. I didn’t need to use it, but I was happy to have the option to maintain the A’s that I worked so hard to get in the beginning of the semester,” one student wrote.

However, some students described barriers which discouraged them from electing pass/fail. These include concerns about graduate school admission, employment and lack of communication from professors about grades.

“It isn’t actually an option for everybody,” one respondent wrote. “I was unable to take advantage of pass/fail (even if I wanted or needed to) due to the fact that I will be applying to veterinary school and having six P’s on my transcript would not go towards strengthening my candidacy, especially for the four prerequisites I took this semester.”

Most students were supportive of the grading system, yet others were critical, insisting that the pass/fail grading should have been mandatory, or the decision deadline delayed until after final grades were available.

Some students said they felt anxious making a decision without knowing their final grades or the potential consequences of having a “P” over a letter grade; others felt that the elective system favored students with the ability and resources to focus on their studies.

“I really wish that the system had been universal, because it felt like a gamble deciding whether or not to pass/fail a class,” One student commented. “This was especially troubling for courses required for my major – would I risk the bad grade, or take the grade to avoid the risk of it looking bad to have a P on my transcript when applying for jobs?”

According to the results of the survey however, students were largely satisfied with their grades and the elective pass/fail option. If the fall or winter semesters abruptly move to remote learning, some students noted they would like to see a similar grading system implemented. 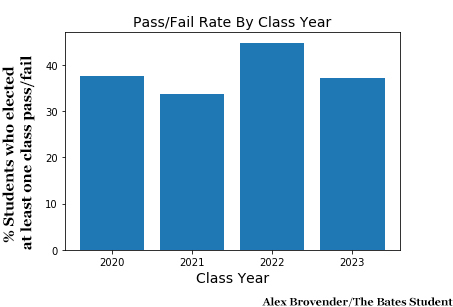 There was no significant difference in the election of pass/fail between class years. Sophomores choose pass/fail at the highest rate with 45 % taking at least one class pass/fail. Seniors were second at 38 %, then 37 % of first-years. Juniors elected pass/fail at the lowest rate, 34 %.

The pass/fail rate by major yielded some insightful results. Only 27% of science majors elected at least one class pass/fail, while 43% of social science majors, 43% of humanities majors, 50% of arts majors, and 67% of undecided majors pass/failed a course.

The pass/fail rate of all survey respondents was 38%.

Many students were particularly concerned about medical school or graduate school admission, as noted in survey comments. Yet, a 16% difference between science majors and social science and humanities majors is much greater than expected.

At first glance, students self-described as “undecided” seem like they elected for pass/fail at a much greater rate than any of the other disciplines. However, with only nine students identifying as undecided majors, the number of responding students is not enough to draw conclusions.

Every other classification had over 100 respondents, except arts majors which also had a low number at 26.

Students who are double majors in different classifications were counted in both.

International students elected to take at least one class pass/fail at a significantly higher rate than domestic students.

Some students faced unique barriers to education due to the abrupt shift to remote learning, including many international students. Some international students were allowed to remain in campus residences by request, however others left campus for a different location within the U.S., or returned to their families in their home countries.

After returning home, many international students in particular grappled with unreliable internet access, challenging home circumstances ― due to the pandemic and socioeconomic situations, for example―and differences in time zones, in some cases exceeding 12 hours. This made it difficult, sometimes impossible, for some students to attend synchronous classes, view recorded videos and complete assignments to the same standard they would have during a normal semester at Bates. 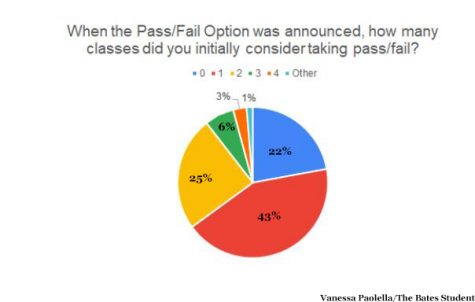 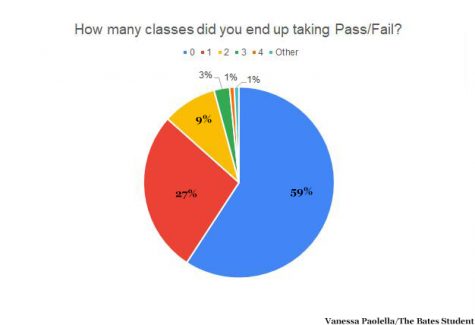 Generally, students elected to take fewer classes pass/fail than they initially thought they would.

Seventy-eight percent of students thought they would take at least one class pass/fail, however only 41% actually did. Overall, 59 % of respondents said they did not take any classes pass/fail.

However, this is just the overarching trend. It is likely that some individual students took more classes pass/fail than they originally thought they would.

Students who took classes pass/fail overwhelmingly did so due to concerns for grades. Students were able to elect pass/fail after completing all of their assignments, meaning that most knew their approximate final grade.

The second most common reason reported was lack of motivation, from just under 100 students. 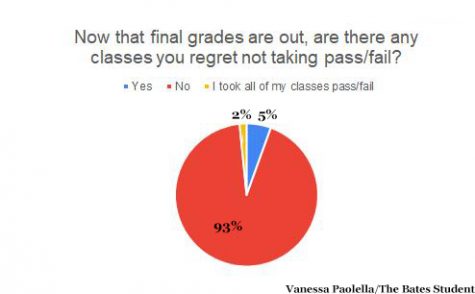 Most students were content with their decision to elect or abstain from pass/fail. Ninety-three percent of respondents reported that they did not regret their decisions; only 5% wished they had made a different choice. 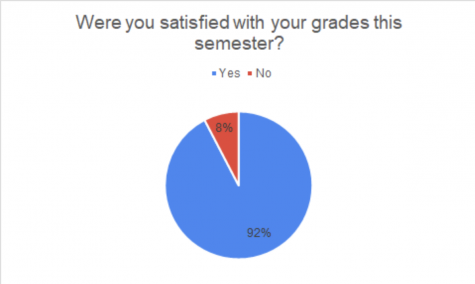