Belarus’s Leader Beats His People As The World Watches 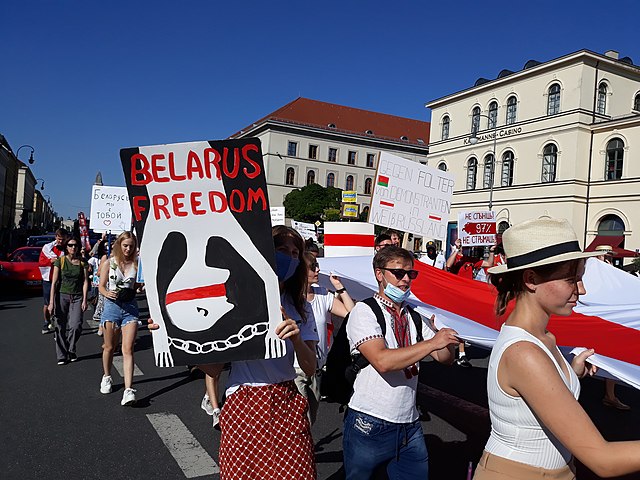 Alexander Lukashenko, Belarus’s strongman president, recently won a rigged election in his twenty-sixth year on the job. He celebrated this “people’s mandate” by beating his citizens in the streets of Minsk, broadcasted on television.

Lukashenko ran against Sviatlana Tsikhanouskaya, campaigning in place of her husband who was recently jailed by Lukashenko in an attempt to stifle his presidential bid. Mrs. Tisikhanouskaya campaigned on one platform: to hold free and fair elections. The subsequent affair was far from fair and led Mrs. Tisikhanouskaya to pack up and leave for Lithuania, but not before Lukashenko got her to denounce any claim she might have had to the presidency.

Russia, often involved in Belarus’s business, is lurking. Belarus recently rejected a Russian proposal a year ago for more integration between the former Soviet bloc and Russia. One may suppose Vladimir Putin would watch with glee at the self demise of Lukashenko and his cronies. Yet, there is more.

Putin has seen his polling fall in recent months as protests have erupted in eastern Russia. In response, he should think it wise to help in repelling a Belarusian uprising to ensure the same does not befall his increasingly ailing government. In a counter move, one would think Europe and the United States should be stepping in to safeguard an economic interest in agriculture and to counter Russian influence. Yet, as Lukashenko appears to cling to power with petty authoritarianism tactics and has been actively working with Putin, the United States and EU powers whisper amongst themselves, seemingly unable to take a stand in their own backyard.

Putin may also find Belarus a worthy subject as he attempts to extend the Russian power grid, the Integrated Power System/United Power System (IPS/UPS). Baltic states are looking to switch to the European power grid known as the Continental Synchronous Area because Putin has the authority to turn off their power in a matter of minutes for weeks if Europe continues to rely on IUS/UPS. A power outage would cost the Baltic states approximately $2.7 billion. Yet, if Russia were to turn off the power in the Baltics, it would also go out in Belarus and western Russia.

Russia is now upgrading the system to protect Belarus and Russia from any blackouts, though. If Russia outraces the Baltic states, Putin will have the same amount of political power as the Soviet Union did over the region nearly three decades ago. Putin will be able to turn off the power in the Baltic states without fearing blackouts in western Russia and Belarus. Belarus, known by most western Europeans for its farming, is in the middle of a geopolitical intersection for the first time since the fall of communism. The rest of the world sits idle.

This is not the first time in the past decade that the United States and European powers have partnered with authoritarian regimes while dismissing their methods. As recently as July, the European Union has worked with Hungary’s president Victor Orbán on the coronavirus relief package. Though the package was originally contingent on halting his attempt at constitutional erosion and dictatorial power grabs, the EU quickly acquiesced and passed it without any mention of regulating Orbán’s government. This passivity extends to the United States government where former president Barack Obama failed to recognize the Armenian genocide despite campaign promises, and current president Donald Trump asks dictators for help with his upcoming presidential bid. Thus, it does not come as a surprise that the United States and EU members have done so little to hold Lukashenko accountable. Yet, what would happen if they did?

One may suggest putting sanctions on Belarus. This would be folly. Crippling a country in the middle of a pandemic would likely inhibit protests, as protesters would not have the socio-economic means to hit the streets. Instead, the target in question, Lukashenko, should have his assets frozen, and the International Criminal Court (ICC) should investigate crimes against humanity violations. According to the Rome Statute, the founding treaty of the ICC, crimes against humanity include arbitrary imprisonment, torture, inhumane treatment, sexual violence, and enforced disappearances. In Belarus, arbitrary imprisonment is abound as well as torture, according to the BBC. Yet, capturing Lukashenko is another story and would likely require cooperation beyond the North Atlantic Treaty Organization (NATO) as they don’t have a military buildup in the region. This does not mean that ICC investigations cannot take place as they should, but such investigations will be limited if international condemnation is not tangible. If Lukashenko feels the economic and social pressure from the international community, he will have no choice but to have an investigation take place. If not, the ICC, the one international institution capable of carrying out justice, will become obsolete on the matter.

To forget the integral part the Belarusian protesters have to play would beget more instability. A new government must be brought to fruition by Belarusians and Belarusians alone. Yet, it is clear that Lukashenko is only willing to play dirty and the time to help the protesters is now when the fervor for change is likely at its peak. This issue, if resolved, will be a catalyst for the Baltic states’ power grid and the protests in eastern Russia. Furthermore, a multilateral effort by Europe would be indicative of an EU not in perpetual self-preservation mode, but an EU ready to take on the challenges facing its member states. It is likely that German Chancellor Angela Merkel will spearhead any action against Lukashenko. The U.S must chip in too. U.S collaboration would help to reignite a U.S-European relationship that has soured in the past three years while also aiding the effort to freeze Mr Lukashanko’s assets.

When Lukashenko first sent his secret police out to protesters, it only caused greater protests. Forced to give in somewhat, Lukashenko released a majority of prisoners arrested for protesting. Having not released them all, the protests raged on. According to The Economist,

“On August 17th a crowd of protesters approached the prison, demanding the release of those still inside. They appeared ready to storm the building but were stopped by a human chain of about 150 activists and priests. ‘There are snipers on the roof, and they are nervous. The last thing we need are more victims,’ shouted one activist, a celebrity bodybuilder named Anatoly Gavrilov. Storming the prison might have broken the protests’ code of non-violence, and given Mr Lukashenko—and his backers in Moscow—an excuse for harsher repression.”

Protesters angered by 26 years of dictatorship should be allowed to protest peacefully. As a potential European partner in agriculture and a useful counter to Russia, Belarus is the ideal candidate to support for human rights advocates and economists alike. That is if there ever can be an ideal candidate. Even so, human suffering especially felt by a nation that has had no reprieve from the tight control of the communist era, ought to be what international cooperation seeks to eradicate. It is not only good for the world economy, but also indicative of a world not splintered by its boundaries and instead forged together by them. The situation in Belarus should not invite the international community to choose between being realists or idealists. An idealist may forcibly remove Lukashenko without seeing the chaos it may cause, and a realist may dismiss such a cause to exist comfortably in their corner of the globe. This is folly. We accept that the world is riddled with strife and suffering, and we can still demand what’s right in the face of it all.