Throughout Bates campus, there exists tight knit communities composed of people who all have a passion for one thing or another. This could be sports, or a more eccentric topic, but in the case of the arts departments at Bates, this passion is a love for creating, storytelling, and connecting with other people.

This passion for storytelling is emulated in Perla Figuereo, a rising senior who is a double major in Rhetoric, Film, and Screen Studies and Theatre, specializing in acting. She was also recently elected as Bates’ student body co-president. Figuereo has been involved with the arts since she was young, and her passion for it has continued throughout college. 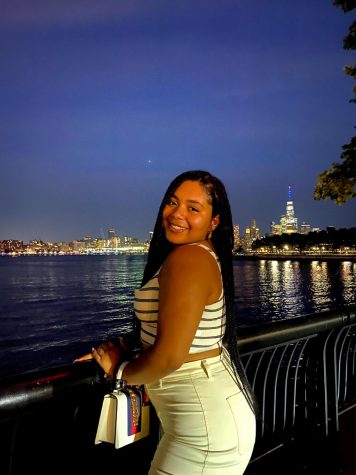 Perla is a first-generation college student from the Dominican Republic who grew up being “suffocated with the arts.” While still living in the Domincan Republic, Figuereo’s mother signed her up for everything, including art institutes where she did painting projects and ballet classes, which she was taught by her uncle, a choreographer.

When Figuereo moved to the U.S., she didn’t join many art groups due to the fact that she didn’t know English. In fifth grade, she joined choir in order to learn the language, which she continued throughout her school years.

Her grade school had a drama requirement which encouraged Figuereo to start acting in plays, but that isn’t all her school did. They took her and her peers to visit museums and did annual poetry slams.

Although art was always in her life, Figuereo didn’t consider pursuing it as a career until she reached Bates. Originally, she wanted to be an anthropologist since it involved working with people, and the fact that art was sometimes involved with anthropology was a plus.

However, at Bates, she left anthropology “because it wasn’t [her] calling.” Instead, she found that she was more at home in the Rhetoric Department, particularly because of Benjamin E. Mays ’20 Distinguished Professor of Rhetoric, Film, and Screen Studies & Africana Charles Nero, who is one of her favorite professors. She even took a film festival class, which helped prepare her for the Flickers Rhode Island International Film Festival where she worked this summer.

In the Theatre Department, Perla has been involved in plays such as “We Are Proud to Present a Presentation About the Herero of Namibia, Formerly Known as Southwest Africa, From the German Sudwestafrika, Between the Years 1884–1915,” a play that discusses the genocide of the Herero by German colonizers and the race issues involved. 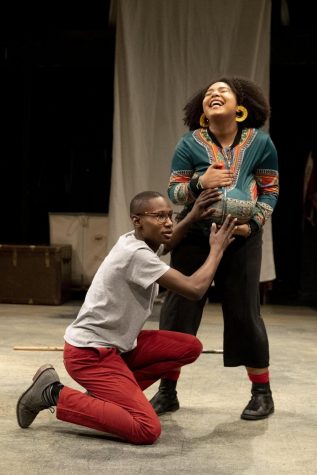 The play revolves around three Black actors and three white actors as they try to maintain their political correctness and composure as they rehearse the title play. However, the white actors playing the Germans get carried away during the rehearsal and inflict verbal and almost physical violence on the Black actors, showing how quickly humans can become violent.

Figuereo was also a part of Ali Greene’s thesis play, called “The Gap,” a play about alien abduction that also addresses rape, sexual assault, and child abuse. The play was unable to run due to COVID-19.

In “We are Proud to Present,” Figureo learned how “to differentiate [her] professionalism from [her] wellbeing which really helped [her].” This differentiation is a necessary tool in performing arts and is why Figuereo loves majoring in theatre. “It’s so fun,” she said, “I don’t think I want to become an actress, but I do it because it’s good for public speaking so I can’t be scared of anything else.”

For film, she draws inspiration “from storytelling.”

“I want to see more of my face on screen. Black, Latina, and women,” she shared. One of Figuereo’s role models is Issa Rae, a successful producer, director, and actress who is the creator, executive producer, writer, and lead actress in the award-winning show “Insecure” on HBO.

From watching Rae and other women like her, Figuereo has realized that she wants to “do the things [she] likes to do” in life, and that money won’t stop her from achieving her dreams. “I’m gonna do what I like,” she said. “I live my life reflecting on the past, living in the moment, ready for the future.” Going into the arts is very unknown, she said.

In her first year at Bates, Figuereo thought that theatre was a very individualized thing, but it became more like a community. Yet, the Theatre Department “doesn’t pull a lot of Black students,” according to Figuereo, due to the lack of plays that talk about stories that relate to BIPOC and plays that include BIPOC.

For this reason, Figuereo was excited to take the role in “We Are Proud To Present.”

“The opportunity was put out there, and I took it,” she said. For her, if a play “doesn’t say ‘African American role,’” she said that she believes “I won’t get it.” Therefore, what she believes can be done to improve BIPOC interest in theatre “is picking plays that have a range of stories…Bates has to be better at choosing plays and creating a safer environment.”

“I want more BIPOC to be part of the Theatre department, and if we push more for more inclusive plays, greatness would come,” she said.