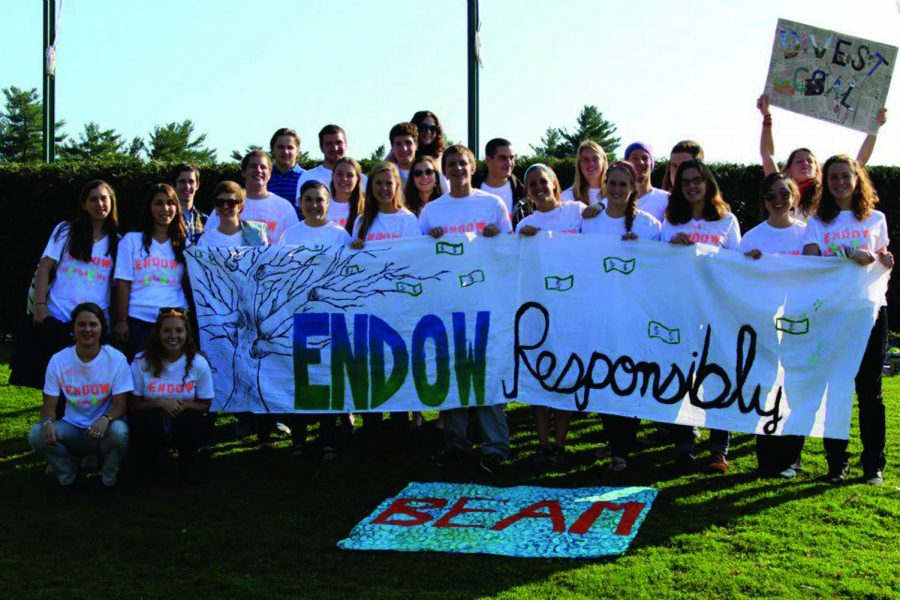 A leader in the fight against climate change, writer Bill McKibben and his grassroots organization 350.org have sponsored similar petitions around the country under the moniker, “Go Fossil Free.” In total, 192 campuses have joined the movement thus far, including fellow NESCAC institutions like Connecticut College, Bowdoin, Colby, and Tuffs.

Recently at Colby, The Colby Alliance for Renewable Energy (C.A.R.E.) met with the College’s President and Vice-President to discuss the group’s divestment goals. At Tufts, students presented the signatures of 1,100 students and 185 alumni while meeting with the University’s Investment Committee for the Board of Trustees. At the meeting, the trustees revealed that roughly 5% of the University’s endowment is invested in fossil fuels and that a divestment process would be complicated, but they committed to continuing to meet with the students.

Earlier this year, Go Fossil Free gained momentum outside of the collegiate sphere, as Seattle, Washington mayor Mike McGinn formally requested the divestment of the city’s two largest pension funds, including Seattle City Employees’ Retirement System which, at 1.9 billion dollars, is the largest portfolio to date to publicly consider full fossil fuel divestment. Of the decision to begin divesting Mayor McGinn said, “There is a clear economic argument for divestment. While fossil fuel companies do generate a return on our investment, Seattle will suffer greater economic and financial losses from the impact of unchecked climate change.”

Meanwhile in Lewiston, Bates is in the early stages of a process that B.E.A.M co-coordinator Annie Cravero says could, if eventually successful, take five or even ten years to fully implement.

“Right now we’re trying to see how much of an effect divestment would have,” Cravero told The Student, explaining that currently B.E.A.M. wasn’t requesting divestment, but simply an investigation into the fossil fuel investments of the Bates endowment. Of the initiative, Cravero said, “I’ve had more faith in this than I’ve had in [any other climate change reform] in my four years… more than lobbying for political change or state legislation or recycling. This is real change, but this is just the beginning of the process.”

Beyond the student body, B.E.A.M. has also been making progress by meeting recently with trustee Darrell Crate, the chair of the advancement committee and co-chair of the investment committee for the Bates Board of Trustees. Cravero called the meeting a positive one, adding that Crate was interested to learn about the College’s fossil fuel investments and would look to pass on student concerns on this issue to fellow trustees. President Spencer did not wish to comment for this article at this time.

Students who are interested in further supporting B.E.A.M can join the organization for a roughly 30 minute candlelight vigil on Wednesday in front of President Spencer’s house at 256 College Street. The vigil, meant to honor the victims of climate change, will begin at 8pm and will include chai and a cappella performances.