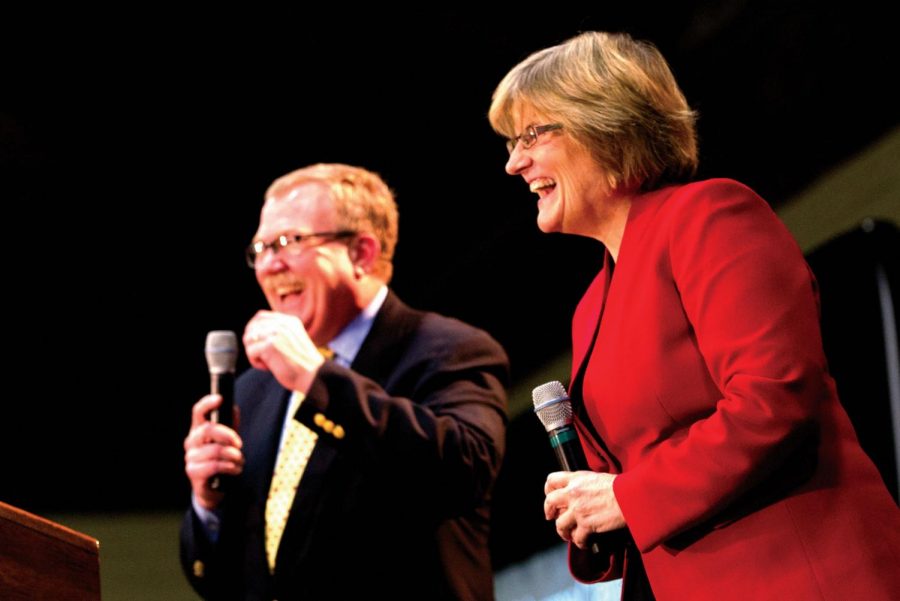 Spencer, age 56, will follow in the footsteps of her father, Samuel Reid Spencer Jr., who served as president of Mary Baldwin College in Staunton, Virginia and later of Davidson College in North Carolina. After spending her childhood on the Davidson campus, Spencer prepped at Phillips-Exeter and then went on to Williams, where she played basketball and graduated magna cum laude with a bachelor’s in history and German. Receiving the Carroll A. Wilson Fellowship from Williams to cross the pond, Spencer earned a bachelor’s degree in theology from Oxford in 1979. Back in the States, she received a master’s in religion from Harvard in 1982.

After earning a law degree from Yale, where she served as an editor of the Yale Law Journal, Spencer briefly practiced law at the prestigious Boston law firm Ropes and Gray before becoming an assistant United States attorney in Boston. Eventually transitioning to Capitol Hill to serve as the Chief Education Counsel to the United States Senate Committee on Labor and Human Resources, in 1993 she took over staffing for the Chairman and Ranking Member of the Committee, Massachusetts Democratic Senator Edward M. Kennedy.

After leaving Kennedy’s staff in 1997, Spencer joined Harvard University, where she served as the Associate Vice President for Higher Education under University Presidents Neil L. Rudenstien and Lawrence H. Summers. Appointed Vice President for Policy in 2005, she was charged with directing and implementing policy initiatives, chairing search committees and overseeing the offices of the president and provost.

“Though she shys from the limelight, behind the scenes A. Clayton Spencer is one of the most influential officials at Harvard,” reported the Harvard Crimson in a June 4th tribute headlined, “Right Hand Woman.”

Suspense built inside the Gray Cage on Sunday as President Cable welcomed a standing-room only audience of students, alumni, faculty and staff, who then turned the stage over to Presidential Search Committee Co-Chair Michael Chu ’80. Chu painted a picture of the numerous qualified candidates and offered thanks to the search committee members for eight months of dreless work.

Finally, Trustee Chair Michael Bonney ’80 introduced Spencer, who received a standing ovation. In her first words, Spencer described the challenges facing the College and institutions of higher education in general, emphasizing her deep commitment to the value of a liberal arts education and to Bates in particular. “We need to make sure the world knows what we’re up to. More people need to understand what a serious and distinctive and wonderful education Bates has to offer” she said.

In the coming months, Spencer will be primarily committed to fulfilling her significant responsibilities at Harvard. However, Spencer will also collaborate with Cable on forward and strategic planning issues, the majority of which will take effect afterJuly.

Having served under four Harvard presidents, Spencer is experienced in transitions in the administrative leadership, and she believes that successful new presidents set and work towards goals through active engagement and listening. She plans to travel across the country this spring to meet as many Bates alumni as she can.

Through this listening tour of sorts, Spencer hopes to begin to understand the issues facing the College and the priorities of the people in the Bates community. “It would be premature for me to suggest that I’m coming in just from the outside, zooming in with my own set of priorities; these need to be organically developed… [I need to] be here long enough, talk to enough people, listen to enough people and then put together a sense of how you want the first year to go,” Spencer said.

“The franchise players are the faculty, the important group you are serving is the students,” Spencer said. Spencer has already felt the excitement on campus around her selection: “I feel extremely welcome and excited by the energy in the last two days.”

Over the next decade, Spencer plans to raise to new heights the College’s reputation as a center of excellence and innovation. “Both of those were already here, but more people need to know about it,” she said.

She praised the creation of General Education Concentrations and the new dance major, and on Bates’ commitment to the arts and the Harward Center, all of which strongly “link theory with practice.”

Having opened the door to Harvard to more lower income students, Spencer will fight for more generous financial aid packages at Bates. However, she said, “We need the dollars to do it.”

When it comes to the necessary fundraising, Spencer hopes to build upon the recent successes of Vice President of Advancement Kelly Kerner and his advancement team. Instilling a culture of philanthropy in students before they graduate to expand giving rates and grow Bates’ endowment is an immediate and important priority.

Many Bates community members argue that fundraising is where Bates has historically fallen behind peer institutions and are eager to see what improvements Spencer will bring. “The most important thing about fundraising is to have a really great product to sell, which means that I personally need to be very engaged with the enterprise that is happening on campus,” Spencer stressed. She hopes to foster engagement between donors and the life of the college in innovative ways.

In addition to bolstering the academic reputation of the college, Spencer, who would prefer students to call her Clayton, is eager to become engaged in all facets of the university life. An avid basketball fan, Spencer described Davidson’s recent trip, led by Stephen Curry, to the NCAA Elite Eight as “wonderful,” and said she is truly excited to become a supporter of Bates athletics. “I actually shot a lot of baskets in my childhood and then played basketball at Williams, before Title IX, before you had to be a good athlete to play sports at NESCAC schools” Spencer said. “I am a triumph of determination over talent. I am an extremely mediocre athlete, but I am a really good fan.”