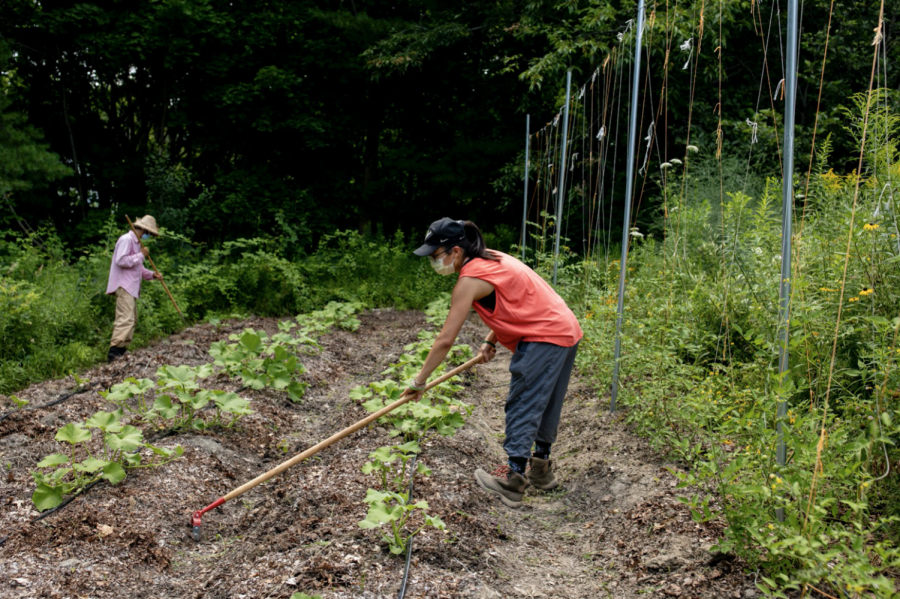 This article was originally written for Slow Food USA and published on slowfoodusa.org. This is an edited version.

“Why do people do that? Why do they waste so much of our Earth’s resources?” Hermione Zhou ‘21 wondered in middle school, after learning that in the past 50 years, approximately 17% of the Amazon rainforest has been lost to deforestation to clear land for cattle ranching.

Hermione grew up in Shenzhen China, in a household where the prevailing doctrine was “do not waste.” She arrived at Bates in 2017 with a passion for nutrition and environmental issues –– where she has made a lasting impact amongst her peers and professors –– and inspired them to address issues surrounding environmental justice.

Her first-year seminar, Life Beyond Capitalism with instructor Ethan Miller (Lecturer in Environmental Studies and Author of Reimagining Livelihoods: Life beyond Economy, Society, and Environment) have informed Hermione’s environmentally-focused pursuits, both in Maine and China.

This past May, Hermione began working with the Maine Landshare Project, a collaborative initiative launched by Land In Common, Resilience Hub and Presente Maine as an emergency response to the COVID-19 pandemic. The project connects Mainers who want to grow food with people who have land to share. “I really liked the idea… and I think it has a lot of potential,” Hermione said.

As the resource team leader, Hermione matches people seeking land with the necessary resources to grow their own food. Hermione said they’ve made more matches than she could ever have imagined.

In Maine, one in eight adults and 1 in 5 children struggle with hunger. With more and more people losing their jobs as a result of a flawed economic system and the COVID-19 pandemic, food insecurity presents an ever-growing threat, especially amongst communities of color that face systemic injustices.

Because of these injustices, Hermione believes that figuring out where the Maine Landshare Project is headed is part of a larger and ongoing conversation. “I think there are ongoing conversations [to be had] about how we want to incorporate concepts of land justice and how we want to frame the whole project, not just based on sharing the land but also on land justice, equity, social justice,” she said.

Land In Common, one of the organizations behind the Maine Landshare Project, was founded to support land access and land justice for historically oppressed and marginalized peoples. It is also a community land trust. Community land trusts (CLTs) are nonprofit organizations that help people set aside land to ensure its protection. CLTs are an alternative to the capitalist system of land ownership and may be able to enact greater land justice.

Many food leaders believe that land access is crucial to food security and can also help cultivate community. Hermione agrees: “Honestly, I like anything that’s shared [that’s] bypassing the market. I mean, why not?”

“Honestly, I never see myself as an organizer…. I just happen to be surrounded by the right people at the right time and we happen to be working on the same thing,” She said with a laugh.

Hermione doesn’t see organizing as something that’s initiated by one person, although she acknowledges that a leader is likely to emerge in the process. Instead, she considers organizing to be an organic process –– “people coming together for a common goal, building relationships, communicating with each other and just trying things out.”

However, scholar and organizer Olivia R. Williams argues that one of the limitations of CLTs is that “they’re not financially self-sustaining.” While Hermione believes in the value of this work, she made it clear that neither CLTs nor initiatives like the Maine Landshare Project will provide a definite solution to any systematic issues unless they happen in tandem with policy change.

“I’ve always believed that we need larger scale, systematic change moving forward, whether it’s how the economy is organized or how people are organized,” she said. “I like these kinds of projects just because they’re doing actual work on the ground that addresses the short term social problems that have to be addressed to make people’s lives more livable.”

Still, taking these small steps forward can help start conversations about alternative ways of living. “Anything local is beneficial in the sense that it brings people together. It provides an alternative view of how the future can be, it expands people’s imagination, [and] it gets things done,” she said.

According to Hermione, the most pressing issue in food systems is “basically capitalism, period.” She believes that capitalism is responsible for the pressure that small farms face from industrial farms, what – and how much – people consume, what they’re willing to pay for food, and more.

She also found that consumers perceive imported foods to be of a higher quality, which she believes is due to media coverage of local pollution and the idea that American and European regulations are more stringent. “It’s all about consumer perception,” she said.

“Even here [in the U.S.], how you define local is always a question up for debate,” she said. “Maybe there’s a possibility of [China] joining the local food movement, but I don’t think it’s going to happen any time soon.”

Over the past three years, Hermione has engaged in a variety of projects that push the boundaries of capitalism. She co-founded ReHarvest, a student initiative to address food insecurity and food waste in Maine by improving communication between farmers, volunteers and emergency food providers. She also volunteered at the Lewiston winter farmers market and Nezinscot Farm, and has assisted professors in the Environmental Studies department with summer research projects.

Hermione strongly recommends A Foodie’s Guide to Capitalism by Eric-Holt Giménez. “[He] deconstructs the food system and how it got taken over by capitalism. It also explains many foundational theories like Marxism in a pretty accurate and concise way,” she said. Another book Hermione loved reading is Freegans: Diving into the Wealth of Food Waste in America by Alex V. Barnard. It explores dumpster diving and how our food system intentionally produces food waste. Hermione has also enjoyed the works of theorists and activists such as Malcolm X, Michel Foucault and Audre Lorde.

And for more on these topics, read:

“A Guide to Transformative Land Strategies: Lessons From the Field” A toolkit created by MIT COLAB.
“Could Putting Farmland in the Commons Support Land Justice and Sustainability?” By Danielle Beurteaux