In a letter to administration on Friday, the group requested a public response by Monday, Aug. 10. 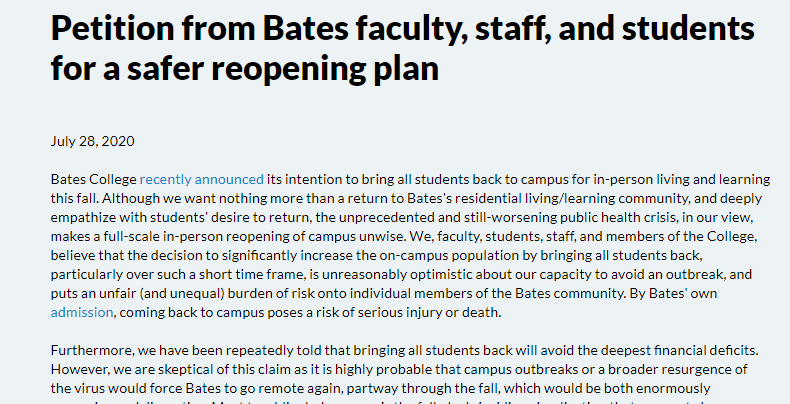 In the past several weeks, an Instagram account named Bates Solidarity has begun to regularly appear on student social media feeds. The group regularly posts anonymous statements regarding the institution’s fall plans; some point out the health and safety risks that Bates employees will be subject to in order to perform their jobs, while others question the feasibility of the testing plans released by the school.

Bates Solidarity wrote that it is primarily made up of tenure-ineligible faculty and staff at Bates. In a post published on July 14, the group wrote that its members share a “broad set of concerns about the college’s responses to systemic racism and to the Covid crisis.”

The group has preserved its anonymity, in large part due to the concern that most of its members experience precarity in their positions at the college. However, on July 28, the account took a step toward making its movement more public by publishing a petition calling for Bates to reconsider its reopening plans for the fall.

The petition asserts that the college’s decision to bring all students back over the span of a few days will have several negative consequences: Bates may not have enough resources to control an outbreak; it shifts an unfair burden of risk onto certain members of the community; and it encourages people to choose between “[their] own health and safety and the college’s fiscal solvency in the name of ‘shared sacrifice.’”

On Friday, Bates Solidarity submitted the petition to the administration for consideration, requesting a public response by Monday, Aug. 10 due to the urgency of the situation.
Broad Faculty Support, but Limited Student Response
As of Friday, 166 students, 144 alumni, 41 current faculty, two former faculty members and 27 staff have signed the petition by name. Additionally, four parents and two L/A community members have signed. Seventy-four members of the Bates community signed anonymously for a total of 459 signees.

The anonymous signees include 28 students, four alumni, 15 faculty, two who are tenured professors, and 27 staff members.

Including anonymous signatures, just over a quarter of current faculty endorsed the petition. Named faculty are members of 23 out of the 32 total academic departments at Bates.

However, the petition seemed to evoke mixed responses among students. Only an estimated 10% of the student body signed the petition, including anonymous signees.

In contrast, a petition calling for Bates to lower tuition this academic year circulated in July, which was similarly distributed online via social media and email, received signatures from almost half of current students.

Similarly, just under a tenth of staff members signed the petition. Student, faculty and staff counts according to the 2019-20 Bates Facts were used to approximate the proportion of signees.

The Bates Student reached out to each faculty member who signed the petition by name. Of the total 16 respondents, seven did not wish to be quoted due to the sensitive nature of the topic. Several of those who agreed to share their perspective on the record still expressed discomfort.

Kristen Barnett, Associate Professor of American Studies, said that although she felt uncomfortable signing the petition, she felt that President Clayton Spencer would only take her vote seriously if she provided a name, and she wanted to show her concern for the well-being and safety of the broader Bates community.

Michael Reidy, Senior Lecturer in Theater, also experienced discomfort when signing the petition, yet said: “I’ve been at Bates long enough to know that free expression of ideas and perspectives are valued and encouraged.”
Reduce the Student Population for Module A
Bates Solidarity calls for a phased reopening, in which only first-years and students with special circumstances are invited back to campus for Module A. This would allow Bates to test its ability to re-open campus on a smaller scale before reevaluating the situation for Module B.

The logic behind this request mostly stems from the issue that COVID-19 is not yet under control in the United States, and conventional college life is incompatible with many safety measures, the petition states. For example, Bates currently plans to continue to house two students in each room, despite the American College Health Association’s guidelines of one student per room.

Barnett agreed that the Bates administration “overestimates the ability of proposed safety measures and [their] ability to change or control individual behaviors and decision making.”

Similarly, Reidy wrote that he signed the petition because he fears that reopening the college when the virus remains uncontrolled in many parts of the country “seems to be asking for trouble.”
Alleviate Financial Stress
Another concern stated in the petition was that Bates has failed to provide adequate framework for alleviating the financial burden placed on students, staff and the broader Lewiston/Auburn community. Bates Solidarity requested specific actions, such as reimbursement of all COVID-19 related treatment expenses for every employee and student, as well as temporarily reduced tuition for students.

Several peer institutions have already made steps to minimize the burden of tuition on families for this school year; Williams offered a 15% reduction in tuition, and colleges such as Smith have frozen tuition for the upcoming year.

Bates Solidarity emphasized the institution’s unwillingness to commit funds to alleviate the burden placed on families, staff, and the broader L/A community, despite spending $65 million on the construction of the Bonney Science Center.

“Whether it’s major construction projects…or the more recent financial outlays for our fall reopening plans – e.g. our Covid testing regime is likely in the millions – the supposed merits of these projects are presumed to be self-evident,” the group wrote in an email to The Bates Student.

“If [Bates] cannot afford to cover employee health costs and provide resources for the L/A community then [they] should reconsider the plan [they] are undertaking,” they continued.

Michael Beling, Applied Music Instructor, highlighted the fact that many people’s job security depends upon Bates operating according to its traditional, in-person model.

“It seems to be a Catch-22 situation,” he said. “However, I err on the side of protecting human life. I also think there’s a very real chance that an outbreak and subsequent hasty shutting down of the college could cause even more serious economic consequences than planning to only conduct online learning.”

Bates Solidarity shared that they have been asking these questions and raising concerns for months, yet do not feel heard by the administration. In addition, they wrote they “[have not] received satisfactory responses to questions, let alone tangible, responsive actions.”

Bates did not respond to a request for comment in an email sent on Monday. In a statement sent to The Sun Journal, Bates said it would wait until it receives the petition to respond.

In the past, Bates has emphasized the flexibility of the current plan, allowing students to choose the best option for their personal circumstances. Students may elect to return to campus with a significantly different college experience, or take classes remotely.

“Students have a lot of power to decide how things will proceed,” Bates Solidarity wrote. “If students collectively refuse to come back to campus under such risky conditions, they could force a bigger conversation about how Bates should move forward.

Bates Solidarity demands a safer opening plan and calls for greater transparency as they raise the question: “Why are the most powerful people at Bates – the same people who extol our emancipatory traditions – afraid of extending democracy throughout the college?”

They hope this is the beginning of “an ongoing dialog about issues that carry much importance for all of us connected to Bates.”