Good Trouble: Remembering The Life and Legacy of John Lewis 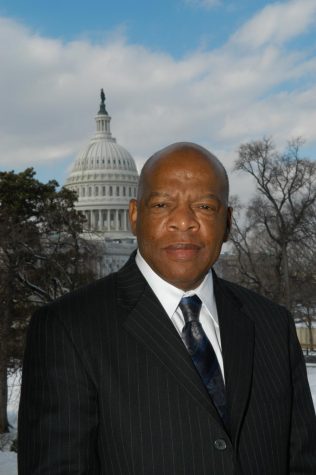 “Speak up for those who cannot speak for themselves, for the rights of all who are destitute.” Proverb 3:18.

John Robert Lewis was a man who believed in speaking up for those who could not. Mr. Lewis was more than just a hero and an inspiration; he became a leader for human rights and racial equality. Growing up in rural Troy, Alabama, Lewis was the son of sharecroppers during a time when segregation reigned. Lewis didn’t know it at that time, but he already had the strength to fight against injustice. When he was seventeen, Lewis famously wrote a letter to Dr. Martin Luther King Jr, telling him he wanted to attend Troy State College in Montgomery Dr. King responded with a round-trip ticket to meet him in Montgomery. This opportunity would not only help Lewis find his inner spirit, but also help him build the confidence he needed to commit to the cause of justice.

The phrase “good trouble” should be interpreted as a means of finding the truth. Lewis used “good trouble” to realize firsthand how broken and divided American race relations were. In 1957, he left Alabama and attended the American Baptist Theological Summer in Nashville, Tenn. Here was Lewis’s first experience with good trouble. When Lewis arrived at the seminary, he learned the importance of public demonstrations, civil disobedience and the fight for racial equality. While he was still very young and inexperienced, Lewis had the determination to participate in nonviolent protests and organized sit-ins to challenge segregation and Jim Crow laws throughout the South. Despite being victimized, attacked and arrested several times, Lewis did not stop in the path to shape a better tomorrow. 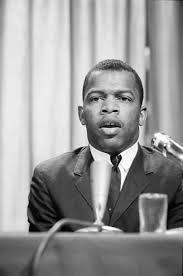 Lewis knew that his belief in “good trouble”  would work. While some people might have seen Lewis’ efforts as futile, he  knew that he was on the right side of history. When faced with such a strenuous task as racial injustice, Lewis knew the fight would never be easy. Regardless of all the obstacles, challenges and fears that stood in his way, Lewis continued to stand up for what he believed in.

In 1963, perhaps one of his most prolific years as an activist, Lewis became chairman of the Student Nonviolent Coordinating Committee (SNCC). Becoming the chairman of one of the most influential civil rights organizations at the time not only gave Lewis experience engaging in nonviolent protest with other political activists, but also gave him the chance to voice his own opinion about racial justice in America. It was during the March on Washington when Lewis stepped onto not just the national stage, but the international one as well. During the March on Washington, Lewis gave a speech that announced to the world his belief in equality and justice. On that day, he famously said, “We do not want our freedom gradually, but we want to be free now!  We are tired. We are tired of being beaten by policemen. We are tired of seeing our people locked up in jail over and over again. And then you holler, ‘Be patient.’  How long can we be patient? We want our freedom, and we want it now.” This moving and passionate speech was more than merely a promotion of civil rights; it was a speech that helped unify a country.

Yet, that speech would not be Lewis’s most iconic moment. Lewis’s career as an American hero spanned 33 years, and started with winning a seat on the Atlanta City Council in 1981. Later in 1986, Lewis was elected to the U.S. House of Representatives, where he not only fought for civil rights, but also for healthcare reform, gun reform and education. Lewis gave his life for humanity. He understood what it meant to struggle and what it meant to fight for something worthwhile.

Another iconic moment in Lewis’s life was when he led a march from Selma to Montgomery, Alabama on March 7th, 1965. On that day, now known as “Bloody Sunday”, Lewis and the rest of the protesters were met with extreme violence. State police officers beat, tear gassed and assaulted the peaceful protesters with no remorse. After that day, Lewis was left bloodied, but not unbroken. As America watched innocent black men and women being persecuted, Lewis still continued to stand up for what was right, and he knew that the cruelty he was met with that Sunday would convince white America to stand with him.

Even during his final days, Lewis still believed in giving his life for civil rights. Just recently, Lewis helped support the Black Lives Matter movement by walking with protestors and marching for equality. Lewis should be seen as more than just a hero. For all of his life, he was dedicated to the vision of uniting the country with love and peace. As we continue to march and as we continue to shape the world as we see it, we must never forget what Lewis gave his life for.

As Lewis last wrote in his personal essay,  “Though I may not be here with you, I urge you to answer the highest calling of your heart and stand up for what you truly believe. In my life, I have done all I can to demonstrate that the way of peace, the way of love and nonviolence is the more excellent way. Now it is your turn to let freedom ring.” We must all be willing to carry out the legacy of Lewis and his belief in “good trouble.”