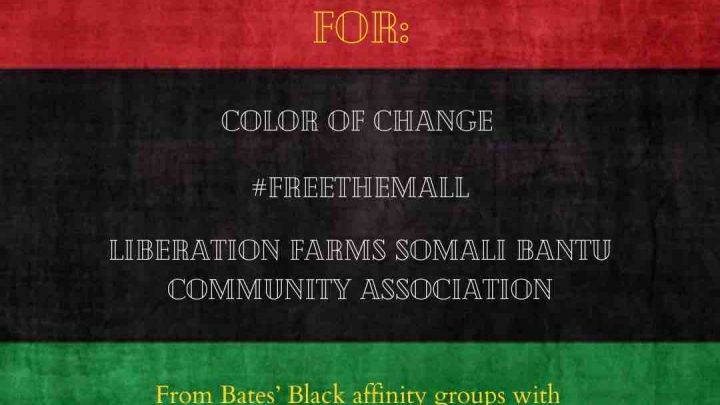 Several Bates clubs have come together to form a coalition that stands for anti-racism and start a donation campaign to help Lewiston community organizations. At the time of writing, the fundraising campaign has raised $20,925.

The Bates’ Anti-Racism Coalition is a group of student clubs led by the Africana Club, the Black Students Union, and the Caribbean Students Association, with support from the Bates College Student Government (BCSG), Environmental Coalition, International Club, Sangai Asia, and Immigrant Engagement Club.

The coalition is fundraising for three racial justice organizations in the Lewiston Auburn Area that work to support Black communities: Color of Change, #FreeThemAll, and Liberation Farms Somali Bantu Community Association. It began on June 11 and continues to take donations.

Bates Black Student Union co-presidents Layla Dozier ‘21 and Joshua Redd ‘21, who were among several organizers of the fundraiser, discussed the importance and goals of the project.

According to Redd, in the wake of the strengthening call to action against the police murders of George Flyod, Breonna Taylor, Ahmaud Arberyin the United States, the need for the fundraiser was felt by many student affinity groups.

“As we were all reeling from recent events in the country, the clubs that represented the vast majority of black students on campus (Africana, BSU, and CSA) felt like we needed to do something,” Redd said. “To be more specific, we wanted to contribute to the fight for racial justice and find ways to support local organizations in our communities.”

After having several conversations with both BCSG and Bates staff members, they settled on having a fundraiser led by black students. The donations will go to community-focused organizations that, in one way or another, challenge violence against black people.

Dozier noted that the three organizations supported by the fundraiser each provide a unique value to the fight for racial justice in the immediate community of Lewiston and beyond.

Each organization will contribute to the protests efforts and community organization that is needed to keep the momentum going to fight for racial structural change, Dozier said. Each organization has a different mission but works together for a common goal of ending racial inequality.”

Dozier also stated that the formation of the Bates’ Anti-Racism Coalition served as a unifying mechanism for allied clubs on campus.

This unifying process, Dozier said, “Speaks to the division we have as students at Bates. We are working to help make sure our allied clubs support us and not take over. That was an important requirement of the support of allied clubs, being able to uplift us without overshadowing our efforts to bring awareness to the inequalities we are facing in the world and at Bates.”

The fundraiser vastly exceeded its financial goal, and was widely spread on social media. Organizations and individuals associated with the Bates community shared the fundraiser, and the project has garnered 440 individual donors to date.

Redd, however, made clear that the work here is not complete and that this moment must continue far beyond the fundraiser itself.

“We hope that the Bates community uses this as an opportunity to begin doing the work,” Redd said. “There is so much work that needs to be done. Raising money is just the beginning. We want to see the Bates community mobilize, organize and advocate for rightness and equity. Your work does not stop here. Hopefully, this is where it will begin.”

Faculty member Kristen Barnett wrote a letter to President Spencer  that was signed by more than 525 people in the Bates community. The letter called on President Spencer to develop a plan to combat institutional racism at Bates

In response, President Spencer released a statement on June 15 titled “The Work of Antiracism at Bates.”

Spencer acknowledged that “black, indigenous, and people of color at Bates are subject to racist acts, and we know that we have not achieved a campus and culture where every student is supported for success across all aspects of their experience, and where faculty and staff from traditionally underrepresented groups are adequately supported in their professional growth and development.

“I regret that we have not made greater progress in closing the gap between mission and reality at Bates, particularly for our students, faculty, staff, and alumni of color,” she continued.

In this memo, Spencer said that each member of senior staff would be required to develop a plan for racial equity work in their section of the college by Sept. 1. She further asserted that Bates would strive to actively promote policies, practices, and structures that would support minorized and marginalized faculty in their work at Bates and academic careers.

Spencer also listed the Bates’ Anti-racism Coalition as a means by which Bates will fundraise and assist students in fundraising for efforts that combat racism.

Donations for the Anti-Racism Coalition fundraiser can be made here.