Economic Uncertainty of Bates Amidst COVID-19 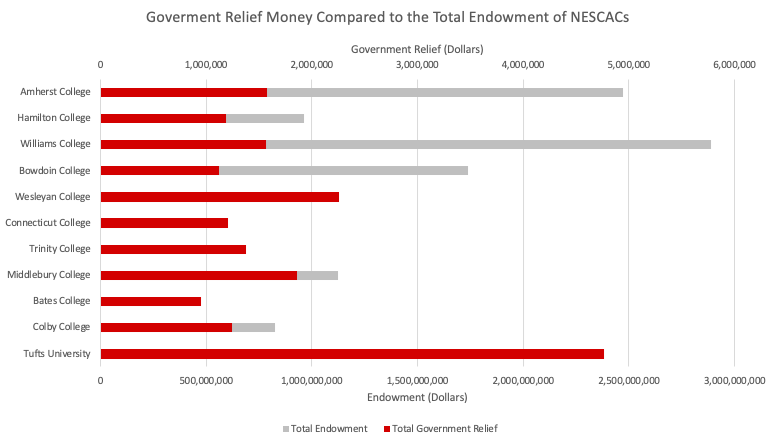 Stay-at-home orders across the country are attempting to help flatten the curve of COVID-19; however, these continuous stay at home orders have led to drastic economic repercussions. Various economists have charted different examples of this fallout, such as a rapid increase in unemployment rates, highly unstable market prices, and concerns over the future of self-employed workers and small businesses.

A major concern of the economic fallout is the future of Bates’s endowment. Bates has only recently reorganized its board of directors to priorities growing the endowment and maximizing donations. However, according to a financial statement covering the 2018-19 school year, over half of Bates’ assets are investments. This investment strategy includes targeting a 5% return on investments annually. 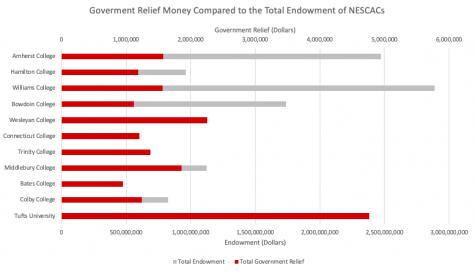 Considering the impending recession and unpredictable stock market, it is likely that Bates will not achieve this 5% return regardless of what their investments are. However, Geoffrey Swift, the College’s Vice President for Finance and Administration and Treasurer, shared that “a portion of the endowment [is] in high-quality, low-duration bonds,” which are largely shielded from economic downturns.

With many colleges across the United States considering delaying on-campus learning until as late as the beginning of 2021, Bates is preparing alternative education plans, potentially even an online-only semester, for the fall. Unlike other colleges with greater financial resources, Bates is economically vulnerable with its relatively small endowment of $329.7M as of June 30, 2019.

Aside from logistical issues, an online fall semester would lead to numerous financial problems: being forced to lower tuition due to substandard education, losing some tuition entirely as some students decide to take gap semesters and receiving fewer donations from alumni also suffering the consequences of a recession.

Bates has taken several measures to minimize these economic consequences. According to a letter written to faculty and staff by President Clayton Spencer on April 14, Bates has developed two ad hoc committees — one focused on fall planning, and the other on college finances. These groups are composed of both Bates professors and staff, but do not include Bates students. According to Spencer, these panels will be making decisions over the next six to 10 weeks to determine plans for the college’s academic and financial future.

In addition, the Coronavirus Aid, Relief, and Economic Security (CARES) Act has guaranteed $41 million to be divided amongst Maine colleges and universities. Over half of this money must be spent directly on students, which helps schools like Bates to make provisions such as work study grants for students. Though the majority of this funding is going to the UMaine System, Bates will receive $953,516 in federal aid. $476,758 of this money must be awarded for emergency financial aid grants for students.

In all, the CARES Act is distributing roughly $14 billion to institutes of higher education. The methodology of the allotment of aid given to colleges is primarily based on two formula factors, according to the Department of Education. The most important formula factor is the number of Pell Grant recipients relative to the total enrollment of the school: 75% of the funds are awarded based on this measure. Thus, the major factor of how much aid a college receives is based on Pell grants, which are federal grants awarded to students who demonstrate exceptional financial need according to a federal need formula.

The other 25 percent of the formula was based on total student population.

It is important to note that Bates was allocated significantly less than other NESCACs, even compared to those in Maine. Graphs below utilize the Allocations for Section 18004(a)1) of the CARES Act listed on a Federal Government website, and the independent website of each college. 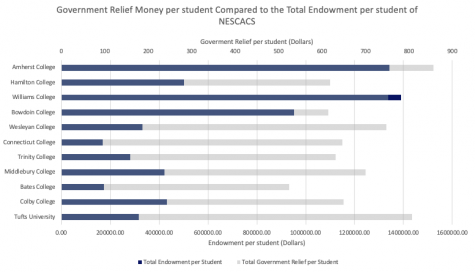 Bates was likely allocated less funding because it has fewer Pell grant recipients (212 in the fall of 2019) than other NESCACs and has one of the smallest student populations. Specifically, in comparison to Bates’ allocation of $915,142, Colby and Bowdoin received $1,167,348 and $1,316,421, respectively.

The economic and logistical repercussions of COVID-19 are constantly being felt. Recently, Bates officially announced that all summer research has been canceled, as well as many other revenue-generating summer programs. In an email to students, John E. Kelsey Professor of Neuroscience Nancy Koven indicated that funds usually set aside for summer research will most likely be used to help ease the financial burden Bates faces.

“Given the ongoing financial impact of the COVID-19 situation, there will be pressure across the college to use unrestricted funds, including those typically earmarked for summer research, to address financial shortfalls,” Koven wrote.

Due to the constantly changing situation, Bates’ financial strategy with COVID-19 will most likely change, and it is unclear how Bates will handle the situation as of now. This is a vital time to reflect on the comparable privilege of Bates; repercussions will likely be felt more closely at community and junior colleges, as well as smaller liberal arts colleges, even though they may be receiving more aid. Economic turmoil exposes these unequal privileges lying within institutions. In the coming months and years, it will be important to be cognizant of how COVID-19 disproportionately affects more economically vulnerable students.