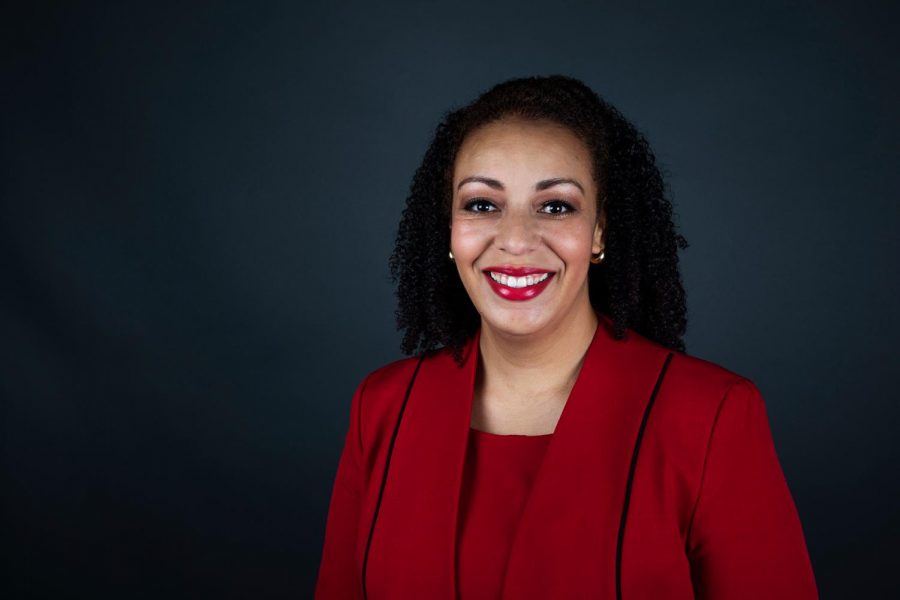 Assistant Professor of Biology Lori Banks joined the Bates Community in the fall of 2019.

With the outbreak of COVID-19 and our new favorite activity—social distancing—most of our social lives are now confined to social media and the internet. These same platforms, however, make it a lot harder to find reliable resources that are not riddled with fake news about coronavirus. Fortunately, we in the Bates Community have access to virology expert Assistant Professor of Biology Lori Banks. Professor Banks holds a Ph.D. in biomedical sciences with an emphasis on molecular virology and microbiology.

Banks was in her sophomore year of college when the Ameri-thrax attacks occurred, a form of bioterrorism shortly after the 9/11 attacks, which shifted her approach to studying biology and chemistry. Recent scientific journals at this time probed her discovery of the key to fighting bioterrorism and epidemics. “I started having my own ideas about how we could target microbes for cleaning purposes, but also for the clearing of those microbes from patients who were infected,” Banks says.

It is important to identify the difference between the term “coronavirus” and “COVID-19.” The term “coronavirus” represents a family of viruses including the specific virus causing the outbreak, Sars-CoV-2. COVID-19 is the term used to describe the illness people suffer from after they are infected with Sars-CoV-2. We have seen two other epidemics caused by coronaviruses: Sars (Severe Acute Respiratory Syndrome) in China from 2002-2004 and Mers (Middle East respiratory syndrome) in Saudi Arabia in 2012.

One critical question that remains unanswered is how long the virus can survive outside the human body. Not only is it a scary prospect that the virus can live on surfaces undetected by us, but even nerve-wracking is that there is no current consensus on how long the virus can survive on these surfaces. Banks helped clarify some of this confusion by noting, “In the most recent studies of COVID-19 particle stability, it looks like it can survive for at least 72 hours on plastic surfaces.” Other kinds of surfaces besides plastic show shorter periods of survival. She also said that “10% bleach is the best disinfectant to use right now to clean surfaces.”

Additionally, Banks gave insight as to whether Sars-CoV-2 is a seasonal virus. “It is unclear if the circulation patterns are following seasonal shifts right now,” she explained. Although there have been studies released that show higher temperatures decrease the stability of the virus, we are still seeing outbreaks in the Southern Hemisphere where it is currently summer. Even though it is still unclear if the outbreak will taper off, it can be predicted that the numbers will not decrease due to recent changes in temperature and humidity.

Perhaps less commonly known, Sars-Cov-2 has a structure that plays a huge role in how it infects human cells. Recent research has begun to focus on the spike protein located on the membrane that surrounds the viral DNA. “You can think about this like the feet or landing gear on a spaceship,” said Banks. Per Banks, the “feet” bind to a human protein called ACE2 on the surface layer of cells in the lungs. The virus is then able to hijack the cell’s reproductive mechanisms to produce more copies of itself.

The related virus, Sars-Cov, uses the spike proteins to bind to the same protein. This similarity between the two viruses is differentiated by Sars-CoV-2’s ability to bind to the protein about 4-times tighter. “Think about this like the strength of two magnets binding. The tighter they interact with the human cell-surface protein, the easier it is to infect the cell,” Banks explained. This gives COVID-19 a much greater virulence than of the Sars-CoV, which caused the epidemic in Guangdong, China in 2002.

Possibly the biggest question yet to be answered is how long should we expect for a vaccine to be created. “Before even thinking about large-scale production issues, it is important to know that it takes about two weeks to generate a good level of antibodies in a patient or volunteer,” Banks said. After those two weeks are over and a serum of antibodies is collected, it takes a few more weeks to see if the patient-made antibodies in the serum can act as protection from infection.

Isolating the antibodies is just the first step of making the vaccine and the serum can only be used if the antibodies are viable. Next, the potential vaccine has to be checked for safety and potential side effects in a procedure regulated by the FDA. This step especially should not be rushed in order to minimize potentially harmful risks imposed on the recipients of the vaccine. If the vaccine makes it through all of these steps, it will have to be mass-produced and distributed efficiently to be available to the world population.

According to Banks, “There is some fast-tracking being done because of the urgency of this situation, but for steps like waiting for someone’s body to make antibodies, you just can’t speed that up.”

On a more positive note, researchers are taking the limited time-frame to come up with new innovative ways of creating a vaccine. The company Novavax is currently working on a potential vaccine that includes using the same protein spike discussed earlier. Since the protein spike plays one of the biggest roles in evoking an immune reaction, scientists are using the genetic code of the protein spike and pasting it into the genome of a bacterium to turn out large quantities of the protein. This is what is known as a “recombinant” vaccine.

There is a great deal of hope that a vaccine will be produced and soon. Moderna Therapeutics, a biotech company based in Cambridge, Massachusetts, has shipped its first batches of COVID-19 vaccines out and is expected to begin human testing as early as April.

For reliable updates on COVID-19, Banks recommends John Hopkins University’s COVID-19 information page and the CDC website. In the meantime, wash your hands, practice social distancing and listen to safety guidelines given by your local state officials.