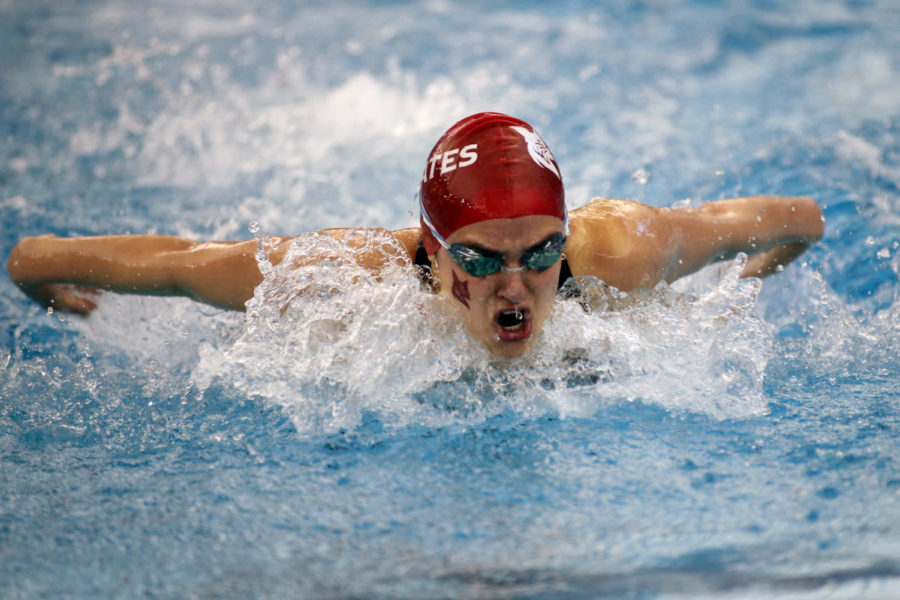 Caroline Apathy '21 is a 10-time All-American. She was the No. 1 seed in the 100-yard butterfly for the NCAA Championships, additionally qualifying to race in the 50 freestyle, 100 backstroke, and several relay events. The women who qualify for NCAAs stay on campus to train [over breaks]. So our whole national’s team really felt like our work had gone out the door,” she said.

On March 12, following the global spread of the novel coronavirus, the NCAA elected to cancel all upcoming spring sports. In addition, the collegiate governing body also made the difficult decision to cancel the remainder of all winter sports. Given the timing of the decision, this meant that all national championships across all three divisions of winter sports were immediately cancelled, bringing an abrupt end to the 2019-2020 season.

The decision sent shockwaves across college campuses in every corner of the country. Seniors who had qualified for their respective championship were now left without any sense of closure, not just to their season, but to their careers as a whole. Years of dedication, sweat, blood and tears leading up to this moment, all to be taken away in an instant in what feels like a cruel and unfair turn of events.

Here at Bates, 25 Bobcats qualified for the NCAA championships including 11 women and one man from swimming and diving, six women and five men from track and field, one woman from Nordic skiing, and one man from alpine skiing. Eight of these athletes are seniors, some of whom had just qualified for their first national championships; some qualifiers were positioned to become All-Americans for the first time in their collegiate careers.

While the cancellation of the winter championships was painful for every student-athlete who planned on competing, the end is especially agonizing for seniors whose careers have been cut short by something entirely out of their control.

In speaking with 10-time All-American Caroline Apathy ’21 of Bates swimming and diving about the cancellations, she acknowledged the difficult inevitability of the situation. While she agrees that “we can all understand the circumstances of it [NCAAs] being cancelled, it’s still disappointing to have spent the extra time it takes to prepare for NCAAs and not have anything lead up to the excitement you look forward to during the season.”

She added, “The women who qualify for NCAAs stay on campus to train [over breaks]. So our whole national’s team really felt like our work had gone out the door.”

Apathy can recall clearly the moment she and her teammates learned of the difficult news that the NCAAs had been cancelled. “The day they cancelled we were literally on deck getting ready to get in the pool talking about the virus and how other teams were taking it,” she said. “It wasn’t until Emmy Daigle ’20 got a text saying NCAA cancelled March Madness … we knew it was over then.”

Apathy’s words paint a bleak image that was and still is shared by many who went through the tumultuous events of March 12, but she made sure to point out that, at least in that moment, she was not alone.

“It felt surreal, everyone reacted differently, but we all felt supported by one another because that’s all we had,” she said. “It was a crazy last week at Bates, you know, all your friends talking about classes being possibly cancelled or which NESCAC school cancelled, but the entire time I was more anxious about swimming and what was going to happen to us.”

While Apathy still has another year to add to her already decorated record, she recognized that this was not the case for many others, including three of her own teammates.

“It’s the seniors this year I feel terrible for,” she said. “Everyone looks forward to their senior year and for it to be taken away like that is devastating.”

Devastating is the word that will be used to describe many of the next few weeks, and while at the end of the day ‘it is just a game,’ to many that is not a fair statement. One only has to look to the TV or social media to see the effects of a world without sports. Given the amateur nature of collegiate athletics, athletes really are competing out of a love for the sport more than anything else, which makes the cancellation of these past NCAA Championships all the more difficult.

However, it is important that in these times of despair and difficulty that student-athletes support one another, just as a teammate might after a bad race, start, or play. No individual has ever been successful without facing adversity, and while this adversity may have halted certain chapters of life for some, we must persevere with the knowledge that situations will improve, we will come out better people for it, and that there is more for each of us down the road.