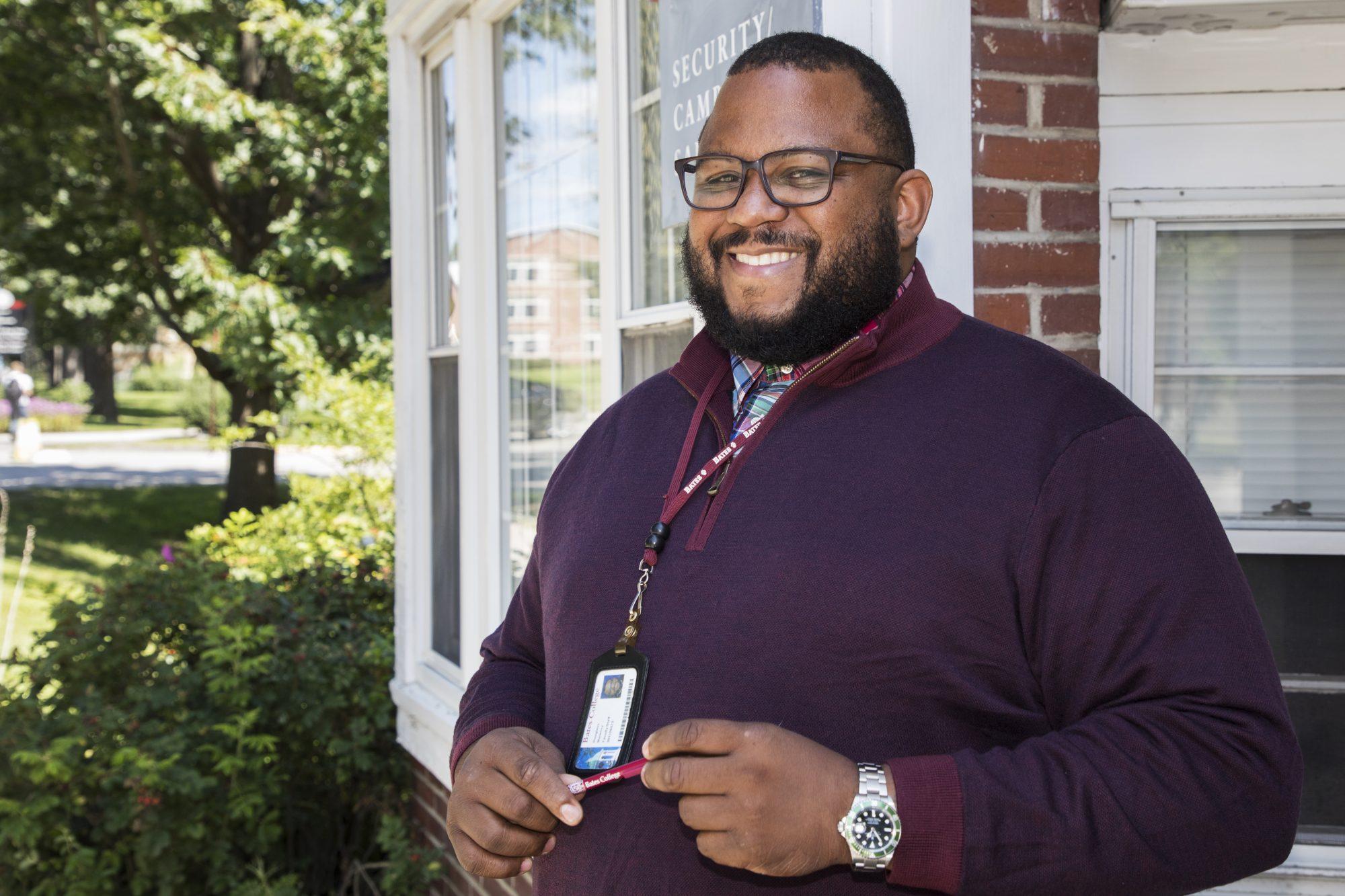 Douglass "Doug" Morency, poses outside the security office, where he works as the director of security and campus safety.

After serving two years as Director of Security & Campus Safety, Douglass Morency has left Bates College to pursue his new position as Director of Safety & Security for the District of Columbia’s 26 branch Public Library System where he will be overseeing a 40 member armed special police force.

Affectionately referred to as Doug by students and colleagues, Morency has achieved much in his short time at Bates. Before leaving, The Bates Student had the chance to speak with him about the role he has played in the campus community as well as discuss his future hopes for campus security.

When Morency came to Bates in November of 2017, he saw a need for change in the narratives surrounding Bates Security and its role on campus. Since his arrival, Morency has worked toward moving Security away from a law enforcement structure to one centered on customer service. As he put it “I think we are an office that intersects with everybody on campus. We’re not just siloed to where we just support one and one group, but anything that happens on campus we support. So everything from summer programs, to athletics, to Commons, to regular you know, ongoing classes, events, obviously, safety and security for our students, faculty and visitors and staff 24/7.”

In addition to serving his team, Morency has also taken strides to improve Security’s image. “[I have also had to] lead my security team to move forward and to be progressive in the sense of not being a punitive or enforcement piece of campus but just to be more supportive and to have a more of a customer service lens and also to make sure that students feel like when they’re dealt with respectfully and they have their dignity intact when we walk away from them…So, you know that’s worked for us. It’s made it easier to, to navigate, I think to connect with the students… I’ve heard that since me being here, a lot of the culture of security and also just the vibe and everything that we do has changed which is very positive and helps you sleep better at night.”

In order to enact change, Morency has invited speakers to come in and talk about dealing with positions of power as well as biases and what they look like. According to Morency, “My background in policing is really centered on community and building community and community policing. And so I’ve been able to deliver that to my folks and they’ve been able to, to grasp onto it and accept it and go that direction with me. The ones that have not are no longer here, you can say. But yeah, since being here, just having that support and that mindset of togetherness and knowing individuals for who they are as individuals, whether they’re students or staff or whatever. When you deal with security, you deal with feelings, you deal with people’s kind of histories and where they come from.”

“And, you know, we’re in Maine,” Morency continued, “and we know we have a student body that is different from what it was 40 years ago, even 10 years ago, 15 years ago. So we have to be aware of that. We have folks from different communities, folks from all over the country here, more so than before folks from the Midwest, the south, you know, some folks from other cities it’s not just a New England school anymore, you know, international students.”

During his time at Bates, one of Morency’s favorite aspects of the job has been interacting with the Bates student body. Despite all expectations for Security members to be distant from students, Morency has been able to foster many relations with students: “I make it a point to not just work in my office. I don’t even know why I have an office because really and truly I like to be out and about and to be interactive and be at every different kind of programming or event. So I like to interact with students whether it’s in Commons at breakfast, or at a play, at VCs, or, you know, one in the morning in the den after partied a little bit and they’re coming back for the mozz sticks before they go to bed.”

He continued, adding, “It’s almost like the job, you know, to keep that up. There’s no secrets or weird interactions about trying to downplay how we live. I tried to get out there a lot. So I really enjoy that aspect of my job and being able to– even though don’t know everybody’s name or at least know a face or at least even if I don’t know you whatsoever– look at you and give you a smile and nod my head and say ‘hi’ and getting a response and having students know from any walk, say ‘that’s Doug Morency: he always sits the middle of Commons he’s always around…He’s a security director. Yeah, okay, but that doesn’t mean that you can’t interact with him’ which is what’s been happening and what I totally enjoy.”

As far as advice for the next Director of Security, Morency advises that they figure out what a Security Director at Bates looks like, and what their approach to Security will be as well as how they intend to lead the team. “They’re going to have to work hard at changing the narrative of security, even on campus. Historically, there’s been certain narratives that security is x, y, and z. Personally, I think, since being here in my eyes, that narrative has changed. Unfortunately there are some folks that want to hold on to the old narratives which is not helpful, but I say that they got to work at really, you know, partnering up and working hard themselves and having the team work on keeping that narrative going in the right direction instead of historic narratives.”

Currently, the process for choosing someone to replace Morency is underway. The Bates Student reached out to Senior Associate Dean of Students, Carl Steidel for more information on the selection process. According to Steidel, the search committee is looking for someone who possesses leadership and management experience, community engagement experience, and preferably someone who has had higher education.

“The next Director must have experience as a leader or a supervisor within an organizattion. As the leader of an organization of nearly 20 staff members, the Director must be able to lead and inspire those individuals to excel while creating a culture of community engagement and trust,” said Steidel.

Steidel also added, “Doug [Morency] has successfully led the department from focusing primarily on policy enforcement to a more balanced approach with a focus on community engagement and while addressing high risk and disruptive behaviors. We hope a new Director will continue to refine this culture within the department so that Security personnel are engaging with students and other community members outside of just the policy enforcement context.”

Near the end of the interview, Morency reflected on his time at Bates: “First of all, I love being here. I love the students. I love my role here. You know, it’s challenging to be a new face in Maine. It’s challenging to be in the role of Director of Security because of what the title holds and what people’s perceptions are…. So that’s a challenge but I’ve enjoyed every minute of it. It unfortunately was a kind of a short go at it. Sometimes you come to an intersection in life and you have to kind of weigh where you are, what you’ve done, and figure out kind of what’s best for you and how you’re going to move forward and that’s kind of where I am.”