Why Does This Indigenous Photograph in Commons Not Have a Plaque? 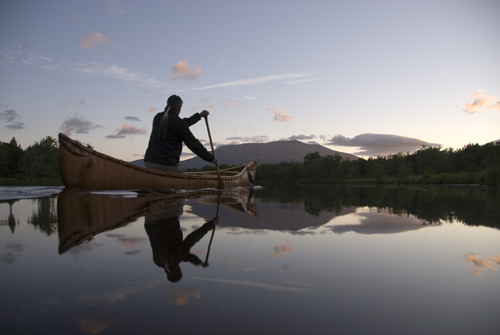 The next time you’re looking for a place to study and all the PGill lounges are full (and you’ve inevitably made uncomfortable eye contact with the person studying in each one), consider heading to the cozy Whelan Balcony Overlook in Commons (above the Fireplace Lounge). As you enter, you may notice a striking photograph hanging across from the doors depicting what appears to be an Indigenous man paddling a birchbark canoe towards Katahdin. What is also notable about this photograph, however, is that it lacks any sort of written description or plaque.

In an effort to find out more about this photograph, I google searched “Bates photograph Indigenous man canoe” (I’m convinced efficient googling word choice is one of our generation’s greatest skills). My search revealed that the photograph was part of the 2008 Bates Museum exhibit entitled “Wildness within Wildness without: Exploring Maine’s Thoreau-Wabanaki Trail.” The Bates website provides a summary of the exhibit. This summary and its depiction of Maine’s Indigenous peoples raised even more questions for me.

According to the summary, the 2008 exhibit was a celebration of the Thoreau-Wabanaki Trail, a connection of historical Wabanaki canoe paddling and portaging routes that spans from Bangor to just north of Baxter State Park, going up the Penobscot River and through the woods and waters of central and northern Maine. The Wabanaki peoples are the original inhabitants of most of present-day northern New England and parts of Eastern Canada and include the Penobscot, Passamaquoddy, Micmac, Maliseet and Abenaki Tribes. Henry David Theoreau was a white conservationist writer who at one point in time traveled the route with two Penobscot guides and then wrote about it. The trail that exists today was a collaborative effort between Penobscots and white conservationists. If you’re wondering how Theoreau’s hike got him his name tagged onto a historic indigenous trail routes, I am too.

The summary then goes on to describe Wabanaki history. It reads, “Changes to the land and rivers caused the Indigenous people to adapt to a different lifestyle, reducing their dependence on canoe travel. Even in the midst of great change and adaptation, the Wabanaki spiritual connection to the land and their canoeing culture still exist today.” These two sentences alone manage to absolve any responsibility of colonizers or anyone at Bates from the mistreatment and displacement of Maine’s indigenous peoples. Changes in the land and rivers didn’t cause Indigenous culture to change, European violence, diseases and genocide did. The Wabanaki’s experience wasn’t “change and adaptation,” it was racism and displacement.

At the bottom of the exhibit summary on the Bates website, an artist bio explains that, “Photographer Bridget Besaw’s current focus is creating imagery for use as an advocacy tool for environmental protection.” While much of the rest of the exhibit consisted of pictures of white hikers, swimmers and climbers enjoying the outdoors, the photograph of the Wabanaki man seemed out of place. Why is an image of a faceless indigenous person in the outdoors being used for an environmental campaign?

It seems to me an all too familiar stereotype– indigeneity as a symbol for pristine wilderness. We as a society equate native peoples as being “one” with the outdoors and don’t think much past that, forgetting that many of these preserved “wild spaces” are their original homelands that have been stolen. When society stereotypes indigenous peoples as being a part of the land, rather than living on it, it delegitimizes their claims to their native lands. Delegitimizing native land claims erases the land’s history of violent dispossession and allows white people including myself to think the land is theirs to preserve. It is crucial that we as a society and we as a college think more critically about how we use the imagery of Indigenous peoples, beginning with this photograph in Commons.

Overall, I believe that the indigenous history of the land that we Bates students call home needs to be a bigger part of our school’s dialogue and teachings. My hope is for there to be a plaque next to this photograph in Commons describing three things: firstly, that the man in the canoe is a Penobscot Indian, so as to give identity and context to the man in the photograph. Secondly, that the Wabanakis are the original inhabitants of the land Bates is on, so as to hopefully start a conversation about our land’s history and our school’s current relationship with local indigenous communities. Lastly, I feel it is important to inform viewers of the Thoreau-Wabanaki Trail so as to give them the tools to look further into it at their own interest and decide for themselves whether the trail is something they want to engage with.

Indigenous peoples aren’t just picturesque wall hangings that can be used for aesthetics. Rather than perpetuating this stereotype with the photograph in Commons, Bates has the ability to use the photograph to start an important, difficult conversation about our relationship with indigeneity.

Check back in the coming months to see if a plaque has been put up!