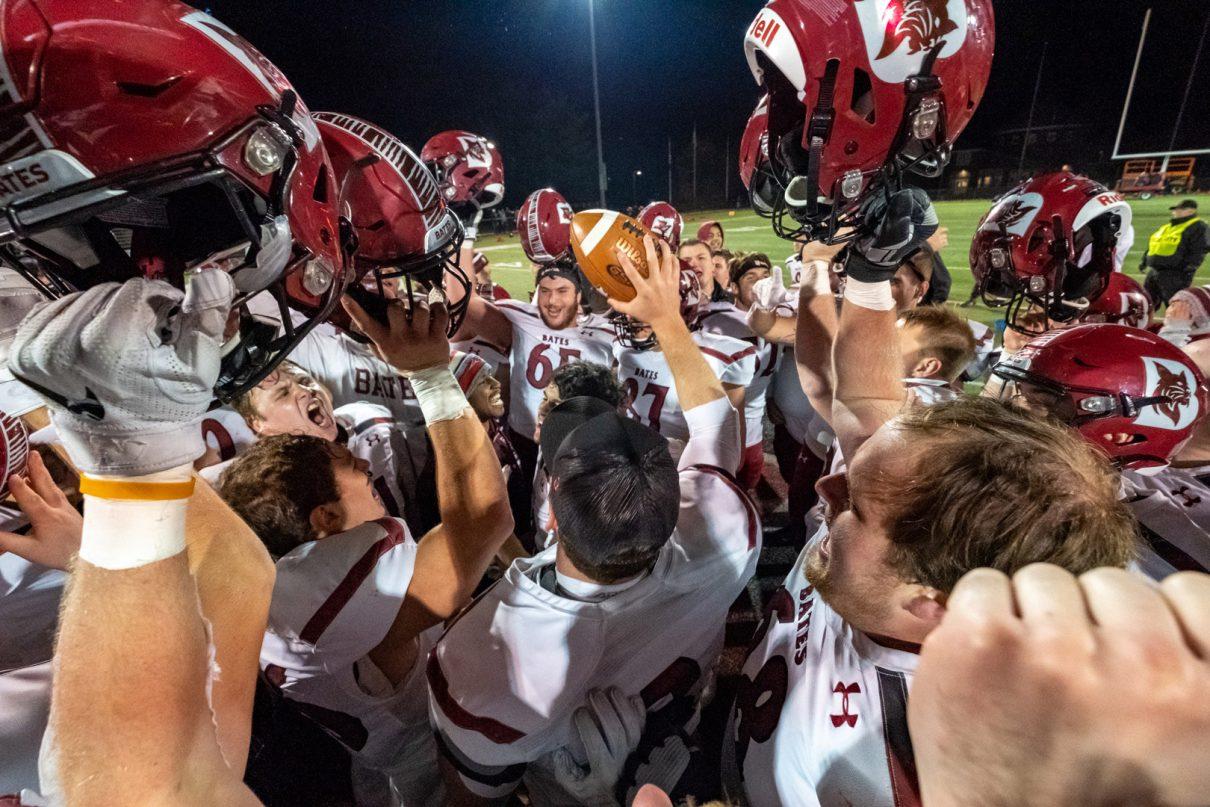 For nearly two years, the Bates College football program was synonymous with losing. 2018 saddled the Bobcats with a miserable 0-9 record, and it seemed that 2019 would be of a similar tone. Leading up to the clash with Bowdoin, Bates had been outscored 244-80 in 2019 and had not won a game. In addition, last week’s close loss to Colby brought season expectations to a new low. The Mules, usually a team labeled as “beatable” by many familiar with Bates Football, edged out the Bates by a score of 23-20. With yet another disappointing loss in the books, it seemed as if the Bobcats were destined to repeat as a winless team. Despite the abysmal record, the Bobcats were confident.

“The atmosphere in the locker room before the game felt like a very locked-in squad. Not a lot of talking…just a group of men mentally preparing to put 4 quarters of good football together,” Brendan Costa’21 said.

Under the lights and in front of a packed Garcelon Field crowd, the Bobcats took the field for the last time at home in 2019. From the outset, it was clear that the Bobcats were not going to accept another winless season lying down. Costa ’21 got the offense rolling early with a 54-yard touchdown pass to Jackson Hayes ’22 for a quick score. The touchdown was the first time Bates had scored a touchdown in the first quarter all season. The Bobcats then successfully converted the two-point conversion to make it 8-0. It was clear the Bobcats were determined to make a statement against their intrastate rivals.

Following the touchdown and a series of punts by both teams, the Bobcats sought to make an offensive impact yet again. Tyler Bridge ’23 pieced together a series of runs that saw the Bobcats put up yet another touchdown in front of the raucous home crowd. Costa and the Bobcats looked to add on to the brilliant first half performance after Zach Doyon ’20 intercepted a pass from Bowdoin quarterback Austin McCrum ’21, putting the Bobcats in great field position. Costa seized the opportunity; dropping back to pass, he delivered a picturesque pass to Hayes for yet another Bobcats touchdown. The completed PAT by Simon Redfern ’22 saw the Bobcats’ point total reach 21.

The Polar Bears and ‘Cats exchanged field goals, bringing the first half score to 24-3. The 24 points scored by the Bobcats was the most first half points since 2013. It was clear this game was something special.

Coming out of the halftime break, the Bobcats knew they needed to hold on to the lead they had worked so hard to create.

“We needed to set the tone early like we did early in the first quarter and take control of the second half”, Costa said.

In the second half, the Bobcats looked to expound on their offensive explosion, but points were hard to come by. Bowdoin and Bates took turns putting together lackluster offensive drives. Costa, who threw the ball well during the first half, began to struggle through the air. Bates Offensive Coordinator Custavious Patterson adapted to the offense’s capabilities and opted to run the ball eight times in a row. The run-heavy offense paid off as running back Tyler Bridge marched the Bobcats down the field with a series of runs. Costa then dropped back and found Sean Bryant ’22 for a 36-yard touchdown with 5:36 left in the third quarter. Redfern was unable to maintain to sink the extra point, as Bowdoin blocked the kick and ran it back for a rare 2-point score. The 2 points for the Polar Bears brought the score to 30-5—an incredibly uncommon score line.

The Bobcats’ victory could not have come at a better time. As the season draws to a close next week against Hamilton, the Bobcats will be looking to build upon the strong performance and double last year’s win total. Hamilton (4-4) will be looking to avenge last week’s 14-7 loss to Middlebury.

“We want more than this and we are working each week to get to the level we want to play at all the time. This is a process but one that is going in the right direction…Getting a road win would be a great thing for our program moving forward and into next year”, said Costa.

While it is important to maintain forward progress, Bates students everywhere can breathe easy knowing their team finally won a game.