What is it Like to Be Religious at Bates? 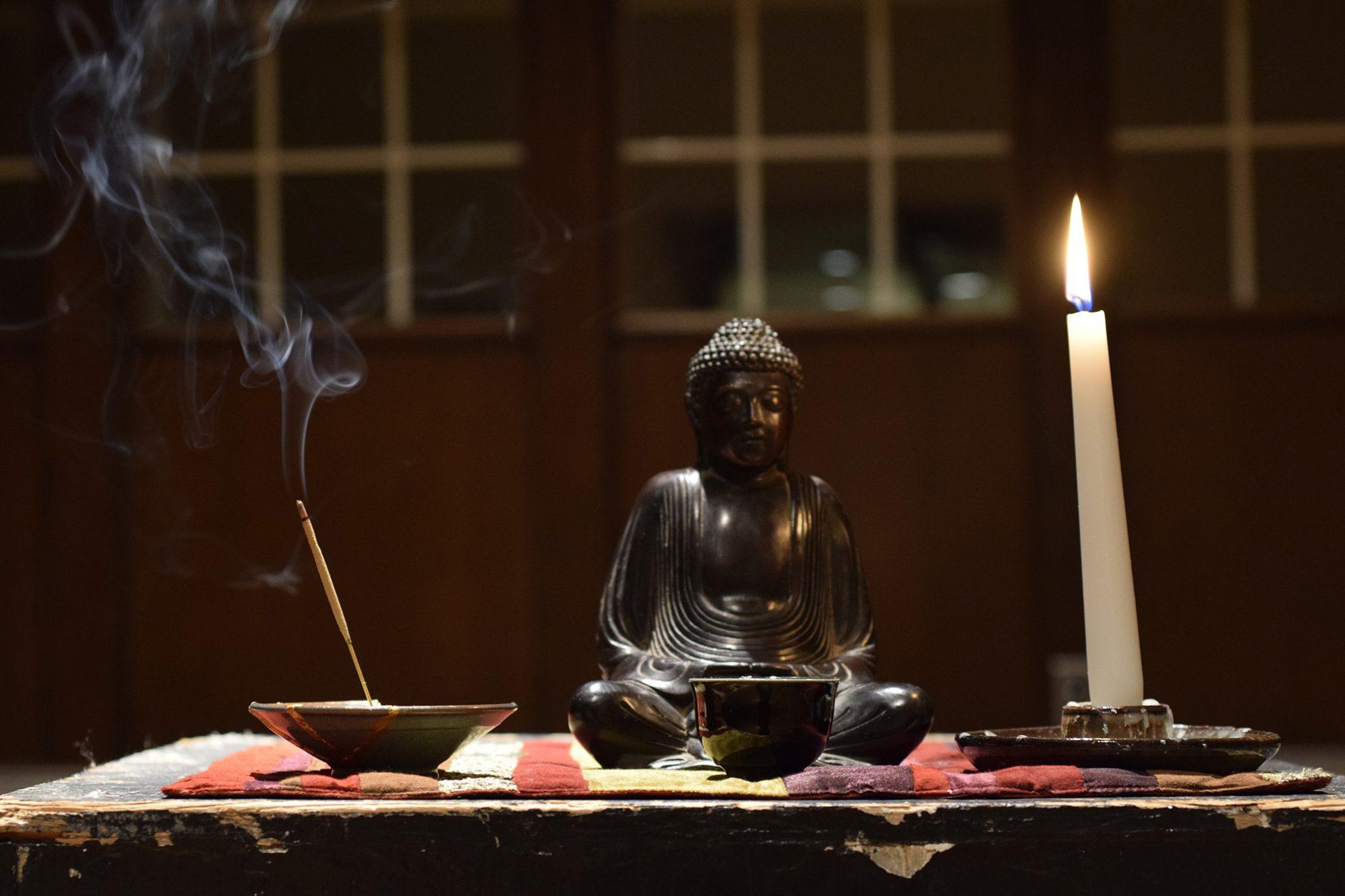 The transition to Bates can be difficult for people coming from religious backgrounds. It is the first time in your life where you get to decide how you spend your time. Often, this new found freedom can leave students reconsidering the role faith plays in their life.

In search of some spiritual fulfillment during my first year, I started attending daily Bates Dharma Society sit in Gomes Chapel. What kept me coming back every day was the sense of community that I had been craving. Later, I started attending Zen services led by Buddhist Chaplain Heiku Jaime McLeod of Treetop Zen Center in Oakland, Maine. After practicing Zen for nearly three years at Bates, I have had to deal with a lot of misconceptions about my practice. This experience of practicing religion at a largely secular institution made me curious about what others’ have experienced while practicing a religion at Bates. For this article, I interviewed active members in the Catholic Student Community, Muslim Student Association, Jewish Student Union, and other members of my club, Bates Dharma Society.

When asked about how he approaches conversations about his faith, Philbin responded, “I try not to bring it up with people when I’m first meeting them…It mostly just kind of happens to come up eventually. It’s hard to avoid a little bit, you know, with my roommate last year I had to set an alarm for mass on Sundays…And I’ve tried to be a little bit more open about that this year—my close friends obviously know that about me. Sometimes when it comes up that I am Catholic, there definitely is sort of a moment like, ‘Oh.’ And that’s not really a nice feeling. And I’ve been trying to get used to that a little more.”

However, Philbin believes that most students come from a good place: “Mostly what I’ve encountered at Bates is not that a lot of students are vehemently opposed to religion, but mostly just didn’t grow up in a religious environment, or just don’t really know much about faith or didn’t really have an interest in it.”

Next, I met up with The Muslim Student Association’s Vice President, Ghasharib Shoukat ’20 at the Ronj. When it comes to explaining his religion to others, Shoukat has had difficulties in the past: “So for me, explaining religion—even if people are taking an Intro to Islam class or like Islamic Art, that’s not really like going in to what the religion is. It’s just on the surface level, like over-the-top reading without actually knowing what’s happening. And I feel that people over here and in America generally are so geographically unaware that they are ready to conflate and confuse everything with one another without impunity or disregard.”

As an international student, Shoukat is uniquely situated when it comes to viewing campus culture. One thing he has noticed over the years is how Americans often do not notice the massive influence Judeo-Christian religions have had on modern day language and culture in the U.S.

“I just think it’s really interesting on campus with all of these skewed understandings of religion—especially with science taking over so rapidly, it’s like a lot of people don’t give religion an importance at all. They just like discredit it, but even though so many of the things they do socially or culturally are religiously motivated or inclined, but they don’t realize it. Why are people screaming or saying ‘Oh God’ all the time, when they say they don’t believe in God?’” said Shoukat.

When asked if others have treated him differently because of his faith, Shoukat replied that the majority of negative attention he has gotten for being Muslim has been in the form of microagressions: “I feel like there are microaggressions around, but it’s very subtle. You know how in the South they’ll say ‘Oh at least they’ll be racist to your face,’ they’ll be up front about it, whereas over here it’s like hidden. You don’t know if people like you or not. Like, is me keeping a beard threatening someone else?”

However, Shoukat has found solace and community in the Muslim Student Association, where others can relate about their experiences of being Muslim at Bates. The club has also taken strides to make practicing Islam easier at Bates—like arranging for a Bates Shuttle to go to the mosque in downtown Lewiston and cooking halal food from Somalia, Pakistan, and India together.

Although Shoukat identifies more with the cultural aspects of being Muslim, he still finds comfort in participating in the religious traditions he grew up with: “There are certain traditions and things that you’re just comfortable with and feel good doing, regardless of whether it has any impact or not. But it just gives you solace, right. So it’s important to continue doing those things that you hold dear to yourself, because it brings peace to you regardless of whether you believe in all of the religious traditions.”

For my next interview, I turned to my own club, Bates Dharma Society, to see how some practicing members of my club feel about being Buddhist at Bates. I first spoke to Dharma’s co-president, Abraham Brownell ’20, about what brought him to practice Soto Zen Buddhism.

According to Brownell, “I was in a period of spiritual tumult and tried to resolve it by reading a lot of philosophy—and I still love philosophy, don’t get me wrong—but eventually I resorted to clicking the random article button on the Stanford Encyclopedia and eventually something about Zen came up and I felt like I agreed with a lot of it—or as much of it as I understood. And then eventually I started seeing a teacher in Cambridge and sitting regularly. And I guess the reason I keep doing it is that it makes possible for me an ethically satisfactory life. There’s this very fundamental reorientation of my life and my projects that happens when I practice.”

However, being Buddhist at Bates has brought its own challenges. “I find there are a lot of misconceptions—particularly around the nature of the tradition. Many people say ‘Oh, isn’t this just a philosophy?’ and there’s quite a lot of ink spilled over that. But my feeling is the criteria people typically have for what is a religion and what is a philosophy, Zen usually meets the criteria for being both. I mean certainly on a day-to-day basis, it’s more of a religious activity.”

Brownell continued, “So day-to-day it’s a lot of meditation. Which is essentially just sitting in an upright posture and following the breath. With a very neutral or balanced disposition towards thoughts. In addition to that there’s also koan study, where koans are like cases or dialogues which are…kind of like antinomies. There’s a process of using those to probe your understanding of things in the world and yourself.”

Lastly, I spoke to Alix Zabin ’22 who is an active member of both the Jewish Student Union (JSU) and Dharma Society at Bates. For Zabin, Bates has been an opportunity for her to explore her identity. During her first year at Bates, Zabin became interested in joining JSU and Dharma Society as a way to meet people, “I think the community aspect was a big part of it, because when I was in high school I did not have any friends that meditated and I also did not have that many friends who were Jewish. And when I came to Bates, there were a good amount of Jewish people and I joined Dharma Society to meditate with other people. Both of these two aspects have really influenced my identity at Bates.”

One of Alix’s favorite parts of Hillel, besides the delicious challah bread, “[I]s being with the same group of people every week, and since it is on a Friday, getting to wind down with everyone and reconnect, because our one commonality is our religion, but other than that we’re from all different majors, and different class years, and different social groups. So it’s really awesome to have that outlet where we can all come together even when we didn’t know each other before.”

So, what is it like to be religious at Bates? To me, practicing religion is one of many ways to meet people and figure out what you value most in life. Although it has comes with its own hardships, having a routine practice has been a blessing.