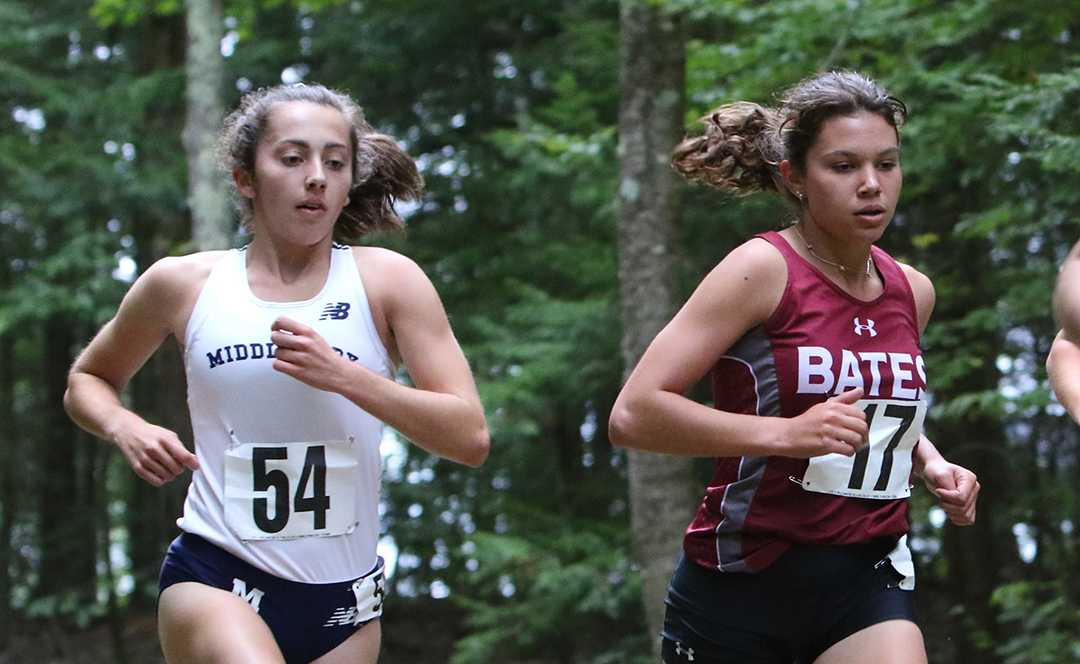 Jillian Richardson, a freshman at Bates from Auburn Maine, placed eighth overall and first for the Bates Cross Country team at the Bates Invitational at Pineland on September 14th, against Middlebury and Tufts.

When asked about her team experience, Richardson says that she “never really had a full girls team in high school, so it’s really nice that there is a complete team here.”

She also appreciated that cross country coaches Jennifer Hartshorn and Arthur Feeley “see us as individuals, and that we all have different abilities and different strengths,” because in cross country, “when you’re racing, you race for the team, and also individually,” Richardson says.

A big thing that she also admires about the team is that fact that “If you’re dedicated, you can join, we aren’t super competitive with each other. There is a lot more thinking about the team in college…before it was more individual.”

Her first college race on September 14th was at Bates’ home course, Pineland, in New Gloucester. It was a new course for Richardson, but she says it was one that she liked to race on.

The team began with a routine 10 minutes before the race, which is something they do at every meet. They stretch, do a couple of striders, and go right to the starting line. They also have a team cheer that’s helps get everyone excited before the race begins.

The Pinelands course is very hilly. The first mile is a lot of downhill, whereas the last mile is all uphill. To race this course well, Richardson says, “you need to be consistent with timing, and have your miles all be around the same.”

She has run on this course before, competing in a “Wave race” hosted by Bates a week earlier. They also have practices on this course, but this was her first time racing on it in an official meet.

Richardson says she is currently working on “knowing who’s around you in your team, pacing, racing smart, and having your last mile be really strong.”

She continues to say that pacing is something she didn’t focus on as much in high school, but it continually proves to be a good strategy at the collegiate level. The most important thing she does during her race is “trying to stay in a good position that sets me up for success.”

Both Middlebury and Tufts have some excellent freshman on their cross country team, and Richardson is excited to race with them throughout this year, and her college career. She also has her sights on a junior from Colby, who won the state race last year, as a possible competitor for this season.

Richardson and the rest of the cross country team are excited to represent Bates at the Maine State Meet on Colby’s home course in Waterville on October 5th.