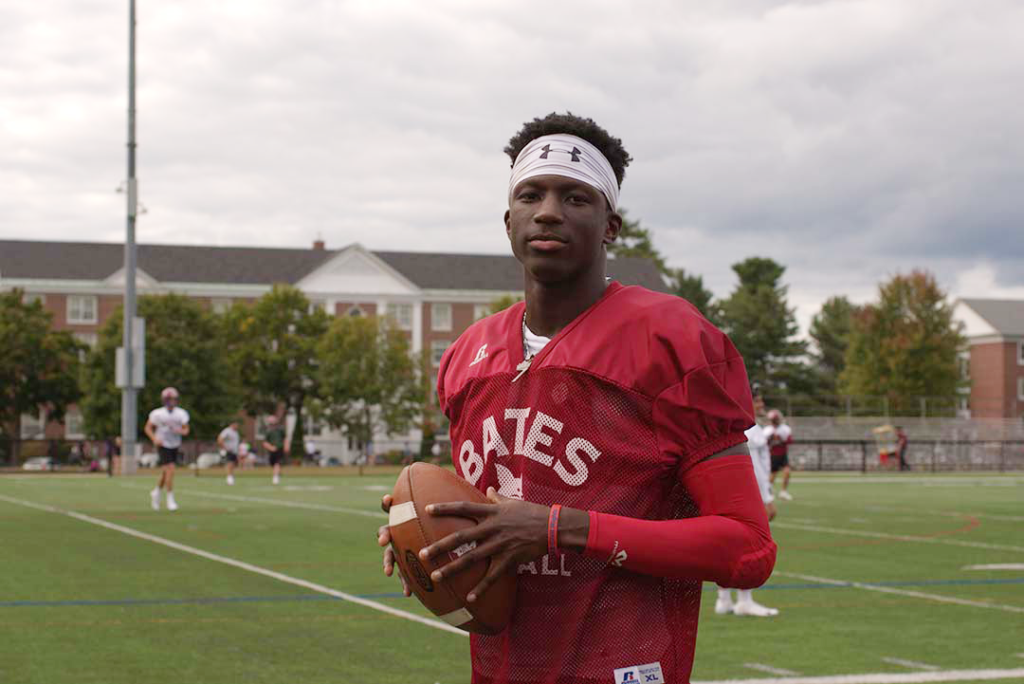 “Football is a way out. There is a lot of violence in Philadelphia. To stay out of trouble, city kids either play football or basketball. I chose football,” said freshman and Bates football wide receiver Mohamed Diawara ’23.

Diawara was inspired to play football because of his older brothers and from watching the Philadelphia Eagles. But Diawara really knew he wanted to play football after winning his first championship when he was 10. “I was playing flag football – because my mom was scared to let me play tackle football – I scored the game winner, so that was pretty big,” he said.

Fast forward to high school, Diawara was setting his school’s record for career receiving yards while also being twice named to the First Team All-Public League and getting selected for the Philadelphia City All-Star Game.

The college recruitment process humbled him, however. As peers began receiving offers from top schools, he anxiously awaited his own recruitment opportunities. Diawara wanted to go to a school and play for a team where he would feel appreciated, explaining that “the college that puts the ball in my hands and trusts me and shows me they really want me, then that’s where I want to go.”

Diawara stumbled upon Bates thanks to his cousin, Mohamed Coulibaly (’23), who, in fact, is another new freshman recruit on the football team. Coulibaly, who happened to already be speaking with the Bates football coaches, was able to connect them and show Diawara’s tapes to the coaches.

“After one or two conversations with the coaches we came here for a visit and there was no looking back after that,” Diawara said. “Bates was the school that really trusted and put their all into me.”

Surrounded by unfamiliarity, Diawara is glad to have his cousin by his side while entering college, “knowing that somebody out there has your back without hesitation [on and off the field], feels great,” he said.

Assimilating into Bates thus far, Diawara takes the challenge of being a student-athlete with a huge level of maturity. “On top of being a student comes athletics,” he said. “[You] still have the same workload as everybody else; there are no special privileges, [you] still gotta do your work.”

He is especially appreciative that Bates has provided resources – like study hall on Tuesday and Thursday evenings – to make sure the team completes their tasks productively as they have such little free time during the fall. As a result, Diawara explains that one’s work ethic has to be far more resolved.

“You [have] got to be focused to play,” he stressed. Diawara’s biggest motivators are, “I have to graduate from college, and I have to be successful. There is no way around it …[and] Bates has put me in the best position to do that.”

With so much time and energy focused towards football, Mohamed’s hopes for the rest of the season are to “help the team win in any way that I can,” and “just to get better as a person and player every day.”