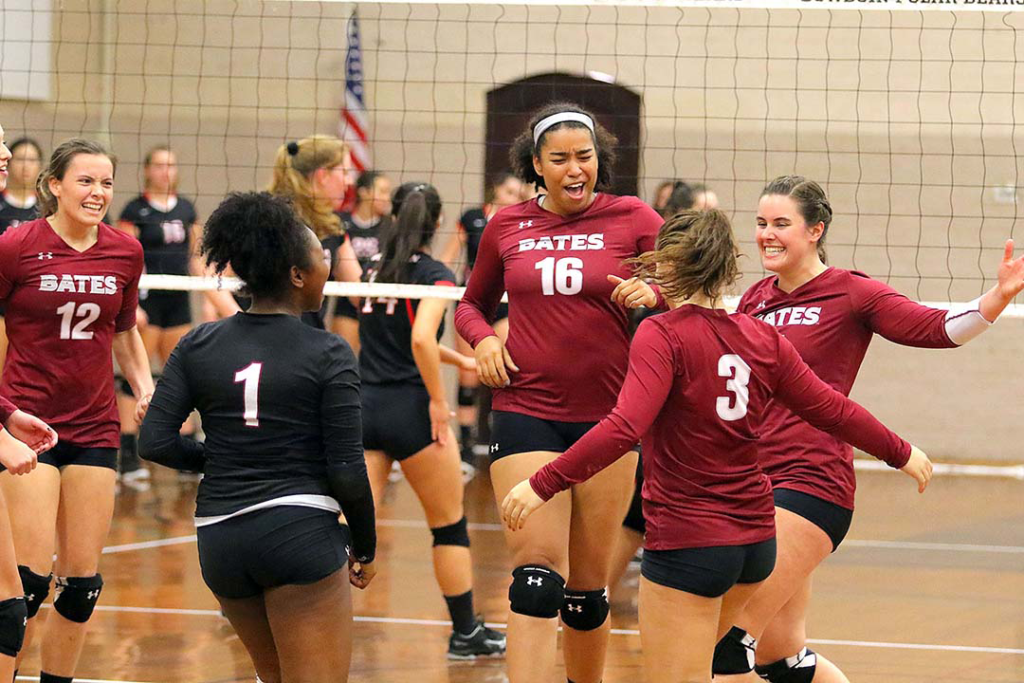 The Bates Volleyball team is off to a blazing hot 7-0 start to the season in which they have only dropped a single set.

The Bobcats started the year off at the Husson Invitational, sweeping double-headers on Friday against Husson and St. Joe’s and Saturday against Plattsburgh and Curry, heading back to Lewiston unblemished.

They followed up their impressive showing at Husson with wins this past weekend over Brandeis, St. Joe’s or a second time, and Rivier.

This Bobcat program is no stranger to success, but this year the bar is set a little bit higher, “This season honestly feels different, the team has confidence unlike my past three years,” senior captain Julia Panepinto ’20 said. “Brandeis and Rivier have been our biggest competition this season and our pre-game mindsets stayed the same. We didn’t panic about the nationally ranked teams in their leagues or the fact that they had been more successful in their conference tournaments. We stayed focused on our game and attacked from the start.”

This season the group has placed a much greater emphasis on maintaining their steady play and, to some extent, acting like they’ve been there before when it comes to competing against elite teams at a high level. This senior class has made the NESCAC Tournament every year that they have been at Bates, but every year they have been sent home in the quarterfinals. They’ve beaten some very good teams in the past, but haven’t been able to keep up that high level of play.

This season it’s about acting like they belong there, not just being happy to be there. “We are nowhere near our talent potential for the season but seven wins has certainly given us the confidence and expectations we needed to compete both in the NESCAC and nationally,” Panepinto added. “Our goal is no longer making the tournament, it’s win the tournament.”

The volleyball team certainly wouldn’t be in this position if it weren’t for the outstanding leadership of the senior class– who also make up the largest portion of the team.

Having played in three conference tournaments and countless regular season contests, the seniors bring a sort of poise and experience that has been missing from this team in years past.

What will be interesting to see, however, is what type of attitude the group brings when the games start going beyond three sets. So far in 2019, all but one of their games were decided 3-0, and the other one was 3-1. In 2018 they didn’t have a single match that lasted all five sets, so they didn’t get a chance to feel the pressure of that last set to just 15 points. In fact, this year’s senior class is just 1-8 in their careers in matches that lasted five sets and that one win came during September of their first year in 2016.

This has left the Bobcat volleyball team in limbo, to some degree. They’ve been stuck in the middle, beating up on the bad teams while simultaneously struggling to compete at the highest level. That being said, Panepinto was right. This year does feel different so far. Over the last four years, they haven’t started a season with more than two consecutive wins – this year they’re at seven and counting. The team also does not typically have this large of a senior class, particularly with this much talent and experience under their belts.

There’s no question that the program is trending upward, but it is down to the players on the court to continue to differentiate this team from those that have struggled in the past. However, backed by experienced leadership and superb talent, Bates Volleyball is on the up.