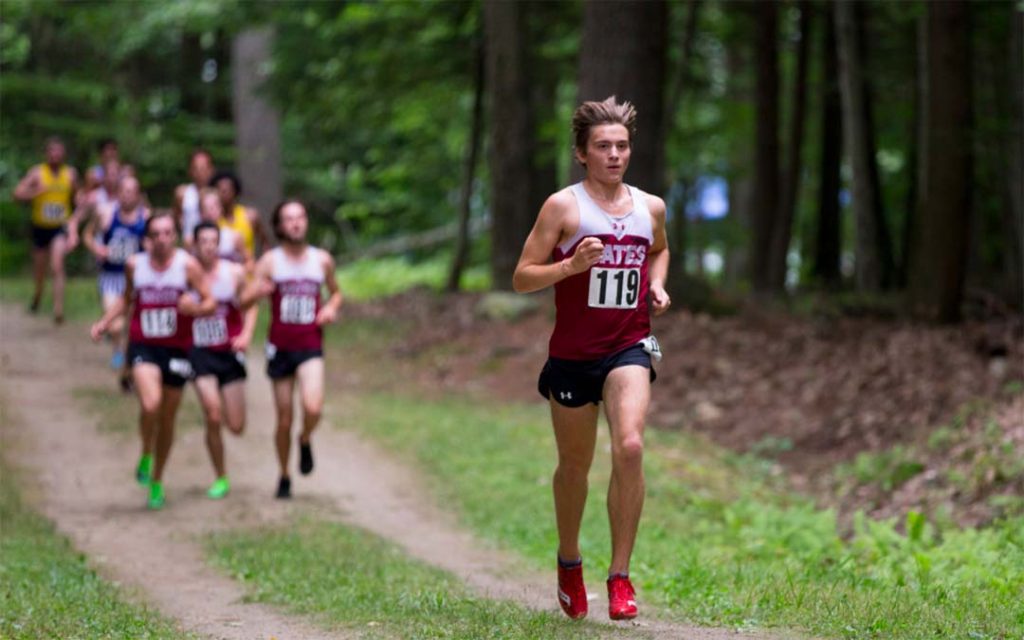 And this race wasn’t just a preseason warm-up either. Three NESCAC opponents, Connecticut College, Tufts and no. 22 Middlebury, and one other Division III team, the University of Southern Maine, all made the trip to New Gloucster, Maine to compete. One might even joke that thiswas a miniature NESCAC Championship.

While these opponents may be daunting for the second meet of the season, the men took them on easily.

At the start of the race, Senior captain Justin Levine and Bart Rust ‘22 led with two runners from Conn. College. The rest of the Bates pack could be seen tailing them from behind.

As the race went on, the lead pack split in two, with Levine and Rust each chasing a mark as they separated more fully from the other Batesies. Sometime after mile three, junior captain Ryan Nealis, Eli Boesch-Dining ‘23 and Tucker Barber ‘21 surged ahead, all beating the second runner from Conn. College to take places two through six.

Levine placed first for the Bobcats with a personal record time of 25:51. Following behind him was Nealis (26:01), Rust (26:04), Boesch-Dining (26:04) and Barber (26:07). In a regular meet, only the top five are scored unless a tie-breaker is needed; racing at Pineland, a difficult twisty, hilly course, the top five for Bates all came in within about 16 seconds of each other, a hugely impressive feat showing the cohesion and depth of the team this year.

“The race went very well for us, we had a strong race plan going in and the team did an exceptional job of executing that strategy,” Head Coach Al “Fresh” Fereshetian said. “We have been talking a lot about being competitively tough, and it was clear to see that we were the toughest team out there on Saturday.”

Conn. College finished second with more than double the points of Bates at 264, followed closely by Tufts with 268. Middlebury and Southern Maine trailed behind with 295 and 413 points respectively.

Coach Fresh notes that while Middlebury held out four runners similar in ability to their teammates in the race, and Tufts was not at full strength, neither was Bates. Junior Jeremy Bennett and first-year Gabe Coffey are expected to be strong runners on the team this season and were notably absent during the race. Bennett scratched on the race day due to an unexpected injury, while Coffey still isn’t ready to race after a summer injury.

“We know that all of these teams will be good later in the year…but for our first 8km race of the year, it was a very good start and we find ourselves in a good spot moving forward,” Coach Fresh said.

Both cross country teams will spend the next couple of weeks training hard, with the men looking to reclaim their State title at the Maine State Championships hosted by Colby at the Quarry Road Trails in Waterville on Oct. 5.