Students Present Their Work at the Mount David Summit 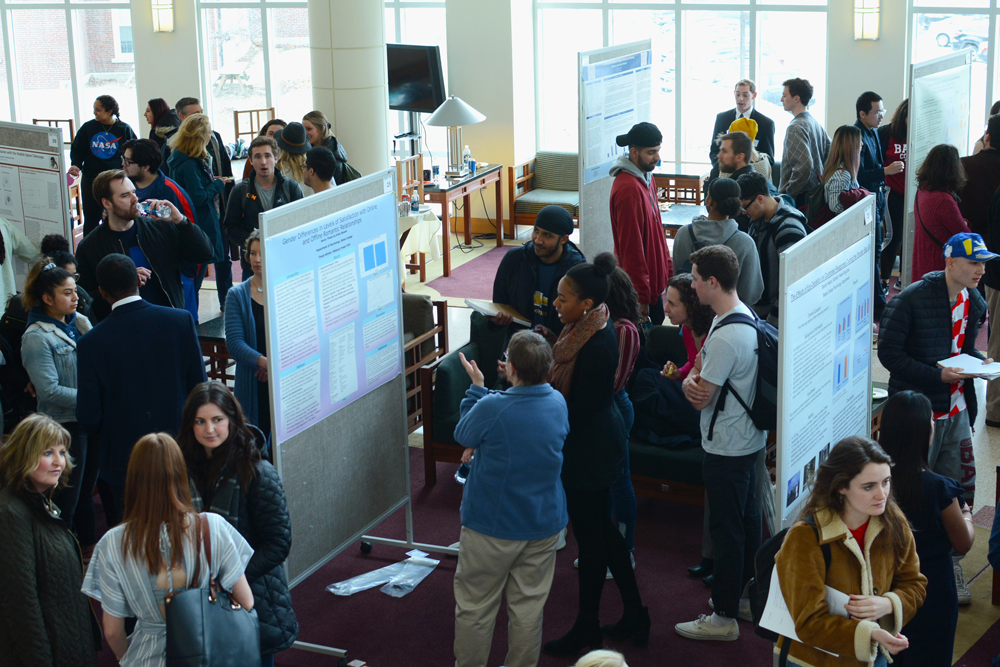 The annual Mount David Summit allows
Bates students—particularly seniors who have
completed their theses—to
present research, academic, and artistic work to the Bates community at large.
This Friday, Pettengill was teeming with students, parents, and faculty members
trying to catch a glance at the numerous posters designed by students
presenting their research.

One senior, Kristine Zengeler,
presented a poster from a long-term lab project entitled “Targeting DNA
Methylation to Treat Intellectual Disability.”“I work in Andrew Kennedy’s lab, who’s in the research
department,” Zengeler said. “DNA is what all our cells built off of, and it can
actually be modified. So, you can add what’s called a methyl group, which is
just a carbon with three hydrogens, to pieces of DNA and that alters which
proteins a cell makes.” The process of DNA methylation, Zengeler revealed, had
promising results for the treatment of intellectual disability among mice
subjects. “We are able to rescue a deficit in long term memory in a model of
intellectual disability. So we have mice in the lab that have Pitt Hopkins
syndrome, which is a rare intellectual disability, and one of their characteristic
phenotypes is having basically no ability to form short term or long term
memories… And through manipulating DNA in these mice, we were able to
essentially rescue their long term memory ability.” Zengler’s research is demonstrative
of the enormous impact undergraduate research may have on future scientific
breakthroughs.

One particularly popular poster was developed from the thesis of Edward James ’19, who embarked on a project entitled “Examining Addictive and Social Aspects of Juuling at Bates College.” For those unaware, “Juuling” refers to the usage of the nicotine-infused e-cigarette developed by Juul Labs, whose flavors like mango and creme brulee have become astronomically popular with young people.

The advertising methods of the company, which frequently include images of young models, have been scrutinized by the FDA, and the company stopped selling Mango pods in retail stores due to the popularity of the flavor among young people. The lack of tobacco in the product, however, makes them subject to fewer of the advertising regulations of actual cigarettes.

Juuling, according to James, is a “brand new topic that really hasn’t been studied that much, especially within the context of public health and where we’re going to be going in the next couple years.”

In a survey of 224 students (109 of which admitted to Juuling at some point), James questioned Batesies about their Juul usage. He used a “hooked on nicotine” checklist (the checklist asks questions about nicotine-seeking behavior, like “Have you ever felt like you really needed to Juul?” and is frequently used for assessing addiction to regular cigarettes) to gain a sense of Juul dependency on the campus.

James’ research yielded several interesting results. Firstly, his study found no meaningful difference between genders with regard to Juul usage. His study also noted that 25% of Juul users admitted to using the product multiple times a day, and another 10% at least daily.

What’s more, the “hooked on nicotine” checklist showed a strong correlation between the length of time Juul users were able to quit and how many questions on the checklist they answered positively. On average, those who answered yes to more questions on the checklist were not able to quit for as long as those who answered yes to fewer questions. Like Zengeler’s study, James’ research serves as a tremendously useful jumping off point for future research in the field. “In the future,” James argued, “I think

should look at Juul usage alongside other substances… my study
asks participants about what context they were using the Juul in, and a lot of
them mentioned at parties, and in environments where alcohol or marijuana were
also in co-usage.” Possible links between other substances and Juuling may
provide crucial information about usage of the product as a whole.

Beyond the research itself,
participants in and attendees of the Mount David Summit were in agreement that
the summit is a helpful platform for showcasing undergraduate research. Ellie
Vance ’21 remarked that attending the Mount David Summit was a useful way to
generate ideas about possible senior research. “I know a couple seniors, and
I’ve heard them sort of mention what they’re studying. And as a sophomore who
will eventually be a senior—fingers crossed—it’s interesting to think about avenues of research.”

Physics and astronomy professor
Aleks Diamond-Stanic, who served as a senior thesis advisor, affirmed that the
Summit was an effective way to publicly synthesize senior research: “It’s been
a great opportunity for them to present their work to an audience that’s
curious and excited, and the vibe of Mount David is always fun because of
that.”