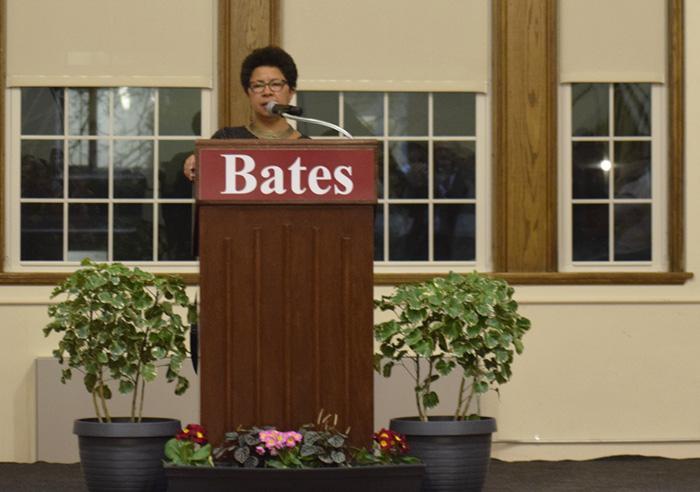 After a snow delay prevented her from coming on MLK Day, historian and scholar activist Dr. Barbara Ransby of Illinois University came to Bates on March 25th to deliver her keynote speech, “Intersectional Feminist Praxis in the Black Freedom Movement from Ella Baker to Black Lives Matter.”

To introduce Ransby, Politics Professor Leslie Hill talked about Ransby’s contribution to her field and her exemplification of what a scholar activist should be. “Scholarly activism is not advocacy,” said Hill. “The difference is critical…A scholar activist begins with questions, testable assumptions, then subjects these to rigorous research, and once in possession of research findings seeks to translate those findings into action and constructive frameworks and methods for work on the ground. Scholar activists theorize and engage directly with practical problems and efforts to improve the world.”

After Hill’s introduction, Ransby came to the podium and gave three intentions for her speech. One of her intentions was to talk about intersectionality, another was to talk about Ella Baker, and finally she wanted to talk about her recent work on Movement for Black Lives. Per Ransby, “I want to wrestle with the challenges of this moment and I want to rely on the past to help us make sense of the present, and to provoke us to reimagine a better, elected future. In my talk tonight, I’m going to give you reasons to worry—and I’m a serious worrier, and in these times I need help—but I hopefully will also give you some cause for optimism”

In midst of the current turmoil in the country, Ransby considers herself to be a struggling optimist. She stressed that now more than ever, we have the chance to change the course of history: “For one, we have to name the moment we’re in, and if anything I’ve learned as a historian, is that we have the challenge of every historical moment that we are privileged to live in. The choices we make, the things we do and don’t do in those moments are the stuff of history. It’s not the generals, and the geniuses, and the presidents, it is us, people like us, who either name what we see before us, or look the other way.”

The first section of Ransby’s speech addressed intersectionality, a term she deems to be “a rockstar” in our political lexicon: “One notion of intersectionality is grounded in individual identity and identity politics.” This theory, termed by academic and lawyer Kimberlé Crenshaw highlights the fact that none of us are ever a single identity at any given moment, instead, it promotes the claim that the identities that make each person interact and mediate each other. Ransby believes this to be a holistic approach to the struggle for justice, as it searches for the root causes of oppression and seeks transformative change rather than cosmetic repairs. With intersectionality as an approach, individuals can come together and affirm that “we can be united and in solidarity without glossing over our differences.”

After spending 15 years of her life researching and writing about Ella Baker, Ransby believes that Baker embodied intersectionality in her approach to political organizing before there was a term for it. As one of the most influential political organizers of the 20th century, Baker was involved in, “virtually every phase of the Civil Rights and Black Freedom Movements in this country as well as human rights and labor struggles,” said Ransby.

Baker took pride in and was amused by being labelled a “difficult woman” by her colleagues, which she earned by demanding more inclusion, democracy and accountability in the institutions that employed her. Baker is most known for founding the Student Nonviolent Coordinating Committee (SNCC), which was one of the biggest organizations of the Civil Rights Movement that worked to organize freedom rides and freedom schools in the American South. According to Ransby, “[Baker] was an ally and a critic of Dr. King; they had different notions of leadership. Dr. King said that ‘leadership flows from the pulpit to the pew’ and for Ella Baker it was precisely the opposite.”

Ransby describes Ella Baker as a radical, and her views on racism and poverty as being foundational of the system we live in. Baker is known for her maxim “Strong people don’t need a strong leader.” For to Ransby, Baker, more than anyone, understood that history and social change happen in the decisions made by the people. Indeed, one of the most important takeaways from Baker’s legacy was the importance of bringing the concerns of the most marginalized sectors of any community to the center of movements for change. For Ransby, this means that “people should not have to comport to middle class standards of respectability in order to have their rights protected or their voices heard.”

The last section of Ransby’s speech focused on how the current Movement for Black Lives embraces Baker’s commitment to coalition and her rejection of the politics of respectability. One critical characteristic of this movement has been leadership for Ransby: “They were initially pretty harshly criticized for being a leaderless movement, and Patrisse Khan-Cullors, one of the founders of Black Lives Matter, now Black Lives Matter Global Network, responded by saying, ‘We are not a leaderless movement, we are a leaderful movement.’ That is classic Ella Baker, this idea that you compromise when you invest in a single leader rather than strengthening and enriching the leadership base.

The second critical characteristic of the Movement for Black Lives that distinguishes it as unique is its intersectional holistic approach to representation. Per Ransby, “[W]hat this movement has said is something very different. It intervened in a discourse that was increasingly re-embracing the politics of respectability. Barack Obama gave a very famous speech at Morehouse in which he told young black men to clean up their act, to behave better, to carry themselves in a certain kind of way, and that that was a real key to racial progress.” This movement holds that behavior should not be cause for a death sentence or be a barrier for upholding one’s civil rights.

Ransby’s keynote was emblematic of this year’s MLK Day theme of “Lifting Every Voice: Intersectionality and Activism” in that it stressed the importance of intersectional practice as a visionary force for transformative change that seeks to uproot the systemic injustices held in this country.