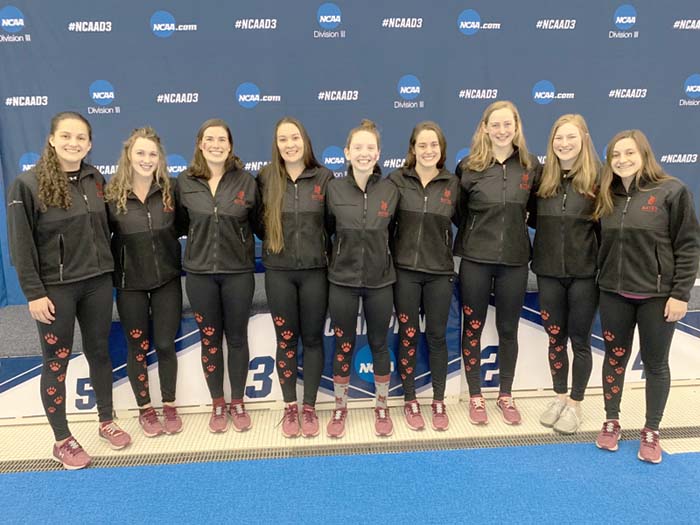 Over the course of March 20-23, nine members of the Bates Women’s Swimming and Diving team travelled to Greensboro, N.C. to compete in the NCAA DIII National Championships. For a small school like Bates, it can be intimidating travelling to competitions of such caliber. However, given the wealth of experience and familiarity that the Bobcats have with the national stage, it was just another meet.

Overall, Bates finished 20th out of 50 scoring teams at nationals, marking the sixth year in a row that the women’s team has finished in the top 20 nationally. Additionally, the nine women who went to nationals earned 21 All-America honors combined.

“The national meet is always an honor to attend,” Head Coach Peter Casares said. “You really have to earn your trip there. With that said, we do our best to make it like any other meet, our routines stay the same. A belief in what got us there has led to us improving when we arrive.”

Day two held a bigger slate of events, with Apathy featured in the 100-yard butterfly, as well as the 200-yard freestyle relay and 400-yard medley relay. Apathy entered the meet as the top seed in the nation following her NESCAC-winning performance of 54.54, nearly a full 0.50 seconds faster than the next competitor in that race.

In the preliminaries, Apathy swam 55.07, leaving her in sixth headed into the finals. The final was unbelievably competitive, with the difference between first and fifth just 0.33 seconds. Apathy touched the wall at exactly the same time as Washington & Lee’s Alison MacQueen, tying her for third, Bates’ best individual finish at nationals since 2016. Apathy’s performance earned her another All-America honor, her second in as many days.

Day three, while not as busy as the previous day, still provided some excellent moments. The 800-yard freestyle relay took home a tremendous eighth place finish with a team made up of Maya Reynoso Williams ’22, Bucki, Faust, and Caroline Sweeney ’22. Reynoso Williams and Sweeney took home their first All-America honors, making them the 28th and 29th members of Bates Women’s Swimming and Diving to do so.

Day four was highlighted by Faust competing in her final collegiate event, as well as the 400-yard freestyle relay. While Faust didn’t manage to add to the two All-America honors she earned already, her teammates and coaches simply could not praise their captain enough for wrapping up her excellent career.

Coach Caseres shared his thoughts: “My favorite moment was seeing our women rush Lucy after she finished her race with a touchout (reaching the timing pad first in a close race). It was a perfect ending to the meet.”

Apathy added to the love for her captain, “The biggest highlight for me was watching Lucy swim for the last time in her career, she raced incredibly well and the fact that she out touched so many competitors was insane.”

Along with Faust’s excellent final performance, Bates had yet another relay earn All-America honors, with the 400-yard freestyle relay of Ho, Ryckman, Sweeney, and Apathy finishing 15th in a time of 3:28.27.

While the group experienced incredibly high levels of success at NCAAs, everyone is still looking for more; Sweeney is already looking forward to next year.

“I definitely have goals in mind for next season,” she said. “Personally, I’m going to work on my technique and keep trying new events to help out the team. For the team, I’m hoping we can continue to move up in the NESCAC, keep our fun and positive attitude and continue to swim fast!”

Coach Casares kept it simple, adding “We want to be top ten. We want to have the best culture in the country and be top ten. And we want to break some records.”

The accolades this group has earned is a strong testament to the incredible levels of effort that they have put in over the course of the season, and should absolutely not go unnoticed.