Directing Success in One Acts Festival

Prior to last weekend’s One Acts Festival, I had only directed once before. It had been a good experience and I was interested in trying again. Upon arriving at Bates this fall, I joined the Robinson Players and learned about the One Acts Festival. Directing seemed like a good way to introduce myself to the group, and would serve as a reference for full-length productions I hoped to direct in the future.

I directed a play called Hysterical by Steve Yockey. In it, a lonely woman named Elizabeth (Julie Jesurum, ‘22) turns to a bottle of Jägermeister to deal with her break up. She winds up getting romantic advice from the logo’s iconic White Stag (Maria Gray, ‘22). The show is a funny yet poignant piece about break-ups and moving on.

Walking into auditions was terrifying. Because I normally audition for shows, I understand that it is nerve-wracking to audition for people who might not know me or what I can do. Even though I was on the other side, I was already comparing myself to the other directors. My friend Johnny Esposito ‘22 and I were the only first-year directors this year and I was convinced that I was out of place and unworthy at first. However, one of the reasons I came to Bates is because of its supportive student body. After a few minutes, I felt comfortable and like I deserved to be there. I was ready to be a part of what I knew was going to be a great show.

After two days of auditions and the battle for our casts, all the directors and I got to work. I was excited to be working with my cast of fellow first-years and ready to see what we would create in just three weeks. Luckily, my high school directing, acting, and stage managing experiences prepared me well for my first dive into college theater. I arrived and left rehearsals feeling confident in our story and how it took shape.

In our first rehearsal, we did “table work:” we all read the script together, and talked about the play as a whole. We then focused on blocking, or staging movement. In the days leading up to fall break, we continued to chip away at the scene to pull out the important storytelling moments.

While we each had our own ideas, we brought them together to create what the audience saw this past weekend.

Gray ‘22 had acted in high school, but Jesurum ‘22 had not. Similarly, our stage manager, Michelle Kim ‘22, had not held the role before. The rehearsal process was a learning experience for all of us and we worked together to produce something we loved.

Without fail, “tech” is a week in which you spend more hours than you would like sweating in uncomfortable clothing while all your other commitments seem to quadruple. Fortunately, the directors worked alongside Robinson Players board members to develop a schedule leading to a pretty painless tech week.

In tech rehearsals, directors are hands-off compared to previous rehearsals. The show is basically turned over to the actors and stage managers, who become responsible for carrying out all the light and sound cues during the run.

My presence in the show wasn’t completely absent, though. I gave notes after tech rehearsals and warmed up with the actors before each show. I saw the show, which consisted of eight one-act-plays, three times. Never once did I feel the unworthy or out-of-place feelings I had experienced in the early minutes of auditions. All eight directors, nine stage managers, and seventeen cast members combined to create a great show that I’m honored to have been a part of. 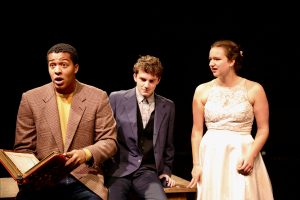 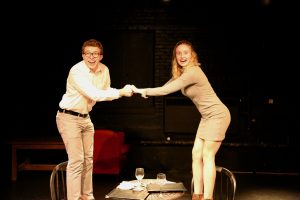