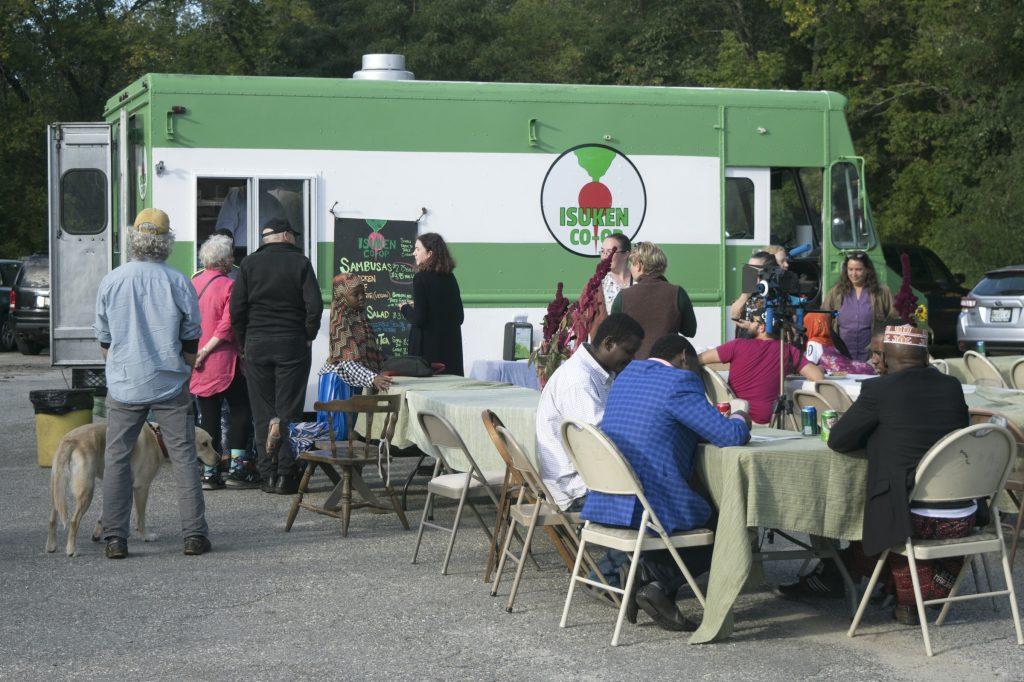 On Sept. 20, 2018, the Isuken Co-op Food Truck held its much-anticipated grand opening on 966 Sabattus Street in Lewiston, where it shares a plot with New Roots, a local Somali Bantu farm stand.

After two years of planning, the Isuken Food Truck is the first ever Somali Bantu farm-to-fork food truck in the US. The name “Isuken” means “unity and together” in Somali, according to the co-op’s website, and is fitting for the five-member cooperative, whose members are equally involved in making decisions, sharing responsibilities and enjoying the rewards of the business.

On the day of its opening, the food truck was bustling with activity. Jonah Fertig-Burd, the director of Cooperative Food Systems at the Cooperative Development Institute, came to enjoy food with his family.

“I’ve been working and providing support to Isuken Co-op as they’ve developed over the past two years,” said Fertig-Burd. “[I’ve been] helping them form their co-op, develop a business plan, explore what their market is, and what they want to do as a co-op. And after that, I helped them raise funds, get the food truck—so really just kind of providing support and training on the way.”

His recommendation from the menu? “Sambusas.” He went into further detail: “I like the beef sambusa a lot, but all of the sambusas are good…Sambusas are going to be a big winner. It’s a good food truck item.”

Professor Elizabeth Eames from Bates’ Anthropology Department was also in attendance. Her connection to the truck started last year, when two of her classes collaborated with the Isuken Co-op in its preliminary stages by providing consulting services and film footage of the business process.

As with most small businesses, the road to accomplishing the end goal had its unanticipated hardships.

Professor Eames explained, “Last year in the Comparative Economic senior seminar… we worked with this group when they were thinking of creating a farm-to-table restaurant in town. But then, meanwhile, the space they had picked out for themselves got sold out from under them and so they invented this idea of creating a food truck instead, which seems brilliant.”

For Professor Eames, the opening of the food truck has a significant impact in terms of the wider community. “It brings people together to celebrate the bounty of the land and the community itself, to share conversations with people you know and don’t know. Anthropologists call it ‘commensality,’ where you eat together, and eating together forms bonds,” she said, adding, “so, throw that word ‘commensality’ in there if you want.”

Finally, I had the chance to speak with Mohamed Dekow, one of the founders of the Isuken Co-op, about what initially sparked the inspiration for the food truck.

“A number of community leaders, including myself, came together. We understood the gaps and the need of the communities [of Lisbon and Lewiston]. This here,” Dekow said, gesturing to the food truck and surrounding area, “is a piece of what was missing from the community.”

According to Dekow, “The biggest challenge to start this was the community displacement and the complaints of the barriers of language—the fears ‘We don’t know the language’ and ‘We’re afraid that this won’t happen,’ and until we found CDI, Cooperative Development Institute, we didn’t know as leaders exactly what to do with the right elements to form the co-op.”

In the future, Isuken plans to cater during the winter months and attend events throughout the summer and fall.

When asked about potentially working with Bates in the future, he replied, “We are looking forward to working with Bates College, of course, because it was one of the tools that we used, because they’ve been filming all of this, they showed great support through our Kickstarter and [helped us] gain the $14,000.”