Have you heard? WRBC’s Cream of Wheat 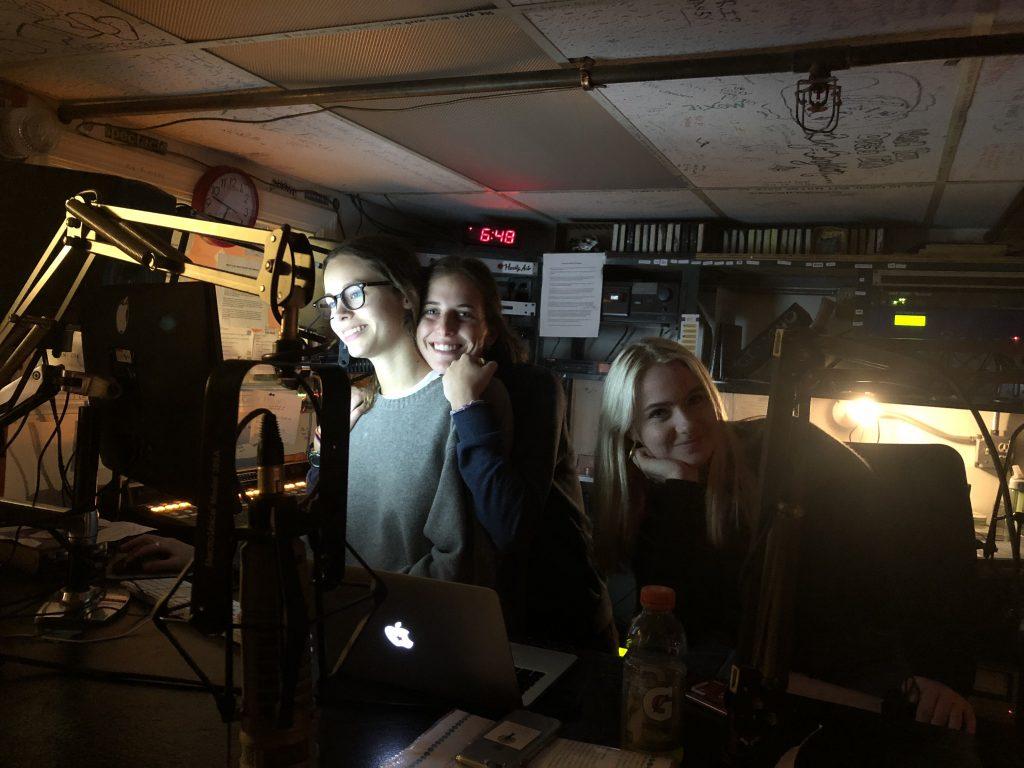 I skirted through the back entrance of the WRBC building into the basement radio station for the first time last Friday afternoon. There, I joined Robyn Moss ‘20, Isabelle Oliver ‘20, and Lizzie Ottenstien ‘20 to talk about their radio show “Cream of Wheat.” The show is lovingly named after the analogy that compares music to cream and the show’s hosts, Moss, Oliver, and Ottenstein, to wheat. They like to submerge themselves in the cream of life, which is music.

The basement of the WRBC building can be described in one word: eclectic. The racks of CDs paired with low lighting and backless swivel chairs lend to a curated, quirky vibe that cannot be beat: the vibe is amazing. I sat down to ask the hosts more about their show and musical preferences.

The Bates Student (BS): What made you want to run a radio show?

Robyn Moss (RM): To immerse myself into Bates and do something with music simultaneously, and it’s a great way to make friends.

Isabelle Oliver (IO): When I toured the Bates, I went into the radio station, maybe it was with you (pointing at Robyn) or someone else, and I thought the area was really cool; it’s private, it’s your own little party that you can completely control, also it’s kinda fun because sometimes people call in and talk to us. I feel like I found my reasons for wanting to do it after, before I was just like “oh! I’ll just try it out!” And it ended up being great.

RM: You didn’t end up doing it freshman year right? Did you witness other people doing it before deciding that you wanted to do it?

Lizzie Ottenstein (LO): I would just add that it was a love of music; anything to do with music I would be drawn to.

BS: What would you say is the music genre of your show? Does it switch up?

RM: It does switch up. I would say that we are very much so predominantly rock and roll.

LO: Classic and indie alternative, but more so classic.

RM: I don’t think we listen to that much modern, though.

LO: We don’t play by the rules.

IO: We just played some old hip hop, some funk, and Pink Floyd and some classic rock too, and we have some random indie bands from the early 2000s. It’s kinda all over the place. Robyn finds transitions very important, so when Robyn is here we really work to keep it somewhat consistent or at least changing at not an-

BS: What do you like to talk about on air?

RM: I like to banter on air – it’s so fun when we get quips back and forth. I like that because I think, “What are the listeners of this show thinking of us when we do that?”

IO: I’ll be thinking, “These people – am I allowed to curse – these people are fuckin’ weird, what is worth with – I mean, what am I listening to?” And then we play good music and they’re like “I guess we will stick around.”

LO: They’re here for the music.

RM: You don’t know that! They could be in it for the banter!

IO: Yeah they could be … maybe…

BS: What’s your favorite song to play on air?

IO: Our stance on creative endeavors is that every human is amazing and we have a strict “no masterpiece policy.”

LO: A lizard in a big sweater.

RM: And these signs really help us to come up with the atmosphere of our radio show, if it wasn’t for our star signs.

IO: Also we do not have our radio show when Mercury is in retrograde-

IO: Because we feel strongly that it affects our mood.

RM: Also, when Mercury is in retrograde, it really causes directive interference to the frequency of the radio waves that are being released from the radio towers, so you wouldn’t even be able to hear the radio.

IO: Yeah and the earth is flat. Have you seen the horizon? It looks pretty flat.