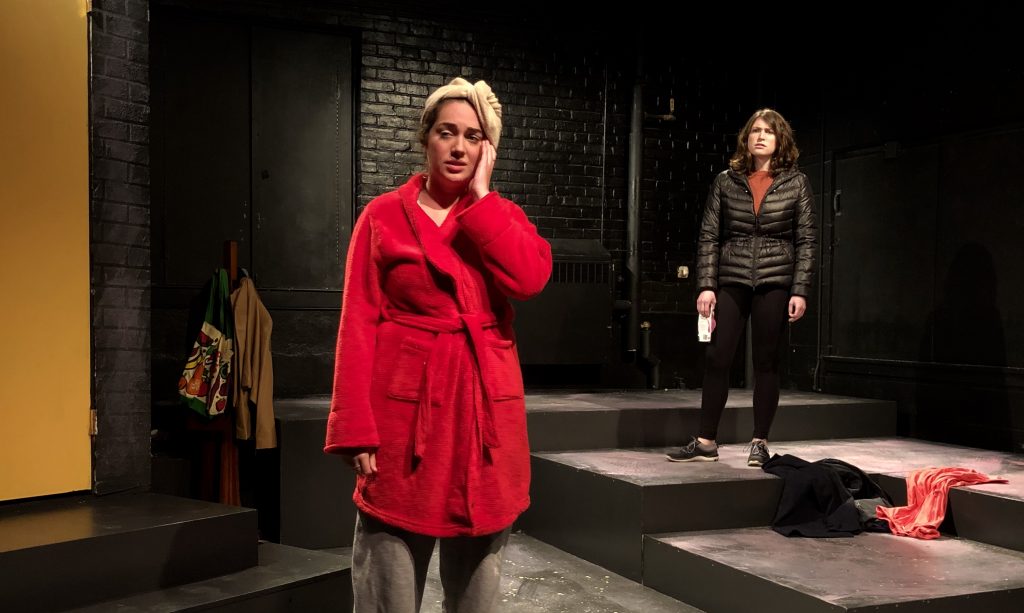 From the left corner of the front row in the Black Box theater, I watched as Girl One, portrayed by Maya Wilson ‘20, paces and rambles to a solemn Girl Two, played by Tricia Crimmins ‘19, about the inherent hypocrisy of a vegetarian choosing to eat eggs on a brunch date. Girl One claims that, from an emotional standpoint, eating an unfertilized embryo is just as morally wrong as eating an adult animal. “…Here is this aborted thing, this thing with the promise of a life.. ripped from its mother.. to be devoured.” There is a pause, bloated with the tension of insult and regret, followed by an apology as Girl One acknowledges the setting: they are in a hospital and Girl Two has just had an abortion. End scene.

“Eggs,” written by Florence Keith-Roach and adapted by Alison Greene ‘20 as an independent study in directing, offers an honest depiction of a friendship between two women as they navigate their careers, relationships, and mental health over the course of a year following a mutual friend’s death. Girl One is an unemployed artist at a crossroads between the safety of her youth and the unfamiliarity of adulthood, constantly on the verge of stepping into traffic. Wilson sets the tone of each scene, her actions and words teeming with the nervous energy of a woman who is desperately trying to make herself understood as her mind unravels.

In contrast, Girl Two is a disciplined and sensible career-oriented woman who stands at a crossroads of her own as she reconciles the value of her professional success with her desire to become a mother. Crimmins often serves as the straight woman to Wilson’s eccentric character and only allows us a peek at her fragility in short but powerful spurts, most memorably in a revelation of her boyfriend’s betrayal and again later as she faces the prospect of single motherhood.

At the heart of the play is a friendship that warps, transforms, and almost cracks along with the characters. It is distinct in its truth; beneath each biting remark and witty retort is a foundation in love. And although the audience is almost never privy to the more positive encounters that the characters have surely experienced, we still witness the strength of their connection. The play, while sometimes funny and light-hearted, does not concern itself with showing the audience the easiest or most appealing parts of a friendship. Instead, the audience has the opportunity to watch the beauty and difficulty of two women seeking comfort in each other as they deal with their own internal conflicts.

Greene, who first watched and fell in love with Keith-Roach’s show three years before taking her own adaptation to the stage, shares that her favorite aspect of the play is that “it shows–celebrates, even–the ugly of female friendship.” She equates the characters to eggs– always wobbling, in danger of cracking, in precarious positions by nature of their fragile form, yet resilient and protected.

The play concludes with a scene that takes place just prior to Girl Two’s abortion. Both women are fraught with the anxiety of an uncertain future as Girl Two announces her plan to Girl One, who has been admitted to a hospital following a psychotic break. The women laugh, cry, and worry together. There are no distractions in this scene–no phones to stare at, no self-aggrandizing monologues–just them, present and careful. “Let’s call the whole thing off,” says Girl One. Blackout.