Socialism: Back on the Ballot

It’s midterm election season, meaning state and federal offices all around the US are up for grabs. The races for these offices are prime territory for the conflict between the Trump administration and its myriad opponents. However, there is a variable that distinguishes this set of midterms from all others in recent memory: the sheer number of avowed socialists running, promising a viable alternative to the Trump agenda. In fact, this season, a record number of members of the Democratic Socialists of America are running for office, the most notable being Democratic Congressional candidate Alexandria Ocasio-Cortez.

Ocasio-Cortez shocked the Democratic Party establishment by defeating 19-year incumbent Joe Crowley in their district’s Democratic primary, winning on a platform that included Medicare for All and free higher education. However, there are many more socialists running besides Ocasio-Cortez who have the potential to not only do well in their races, but to use their candidacies as a platform for the broader socialist movement. One of them is Rashida Tlaib, who will likely be the first Muslim woman in the US Congress. Closer to our campus we also have Zak Ringelstein, a candidate for US Senate. A member of the Southern Maine DSA, Ringelstein is running on the Democratic ballot, promising to fight against the rising tide of economic inequality. However, socialist candidates aren’t only running in federal races. A lesser known candidate is the Socialist Party’s Maia Dendinger, who is running for Maine State Senate in the Orono area, independent of the two-party duopoly.

This election season is not the first time socialists has seriously sought office all across the United States. We can look back to the early part of the 20th century when the Socialist Party was able to elect two congresspeople, Meyer London and Victor Berger, from New York City and Milwaukee respectively. However, the socialist movement took a beating during World War I and the Cold War, and because of that, success hasn’t been seen on the same scale since.

Because we are entering into an unprecedented resurgence of socialism here, mistakes have been made by socialist candidates. For example, those who pay attention to Left politics may know that Ocasio-Cortez and Ringelstein have been criticized for statements in support of Israel’s “right to exist” and support for small-scale capitalist enterprise, respectively. Because of this, it’s easy for our opponents to say that infighting on the Left will render us politically irrelevant. However, these critiques ignore the fact that we are in an unprecedented situation where questions surrounding how socialists should campaign are bound to emerge.

The strength of a socialist candidate is not only what they will do in office, but what they will say in the streets. Even though socialist candidates won’t win all the races for which they are contesting, that doesn’t mean they aren’t worthy of your vote or consideration; they play a crucial role as candidates who are uniquely able to offer ideas about how we can achieve full liberation from oppression for every human being.

If you do not consider yourself a socialist, or if you are a socialist already but not too involved, I want to invite you to become a part of this exciting moment. You can look up socialist candidates running near you, see how these candidates are responding to the crucial problems that the Trump administration poses for humankind, and join an organization that these candidates are involved with, like the DSA. As someone who has been a socialist organizer since I was 16, I can relay that it’s been difficult at times to gain a modicum of serious recognition. But now that we are living in a time where at least two open socialists will likely get seats in the US Congress, I ask everyone who is an opponent of the exploitation and oppression that comes with the capitalist system to join the fight against systematic oppression. To everyone else, we’re back! 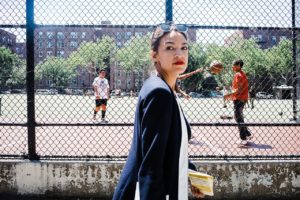