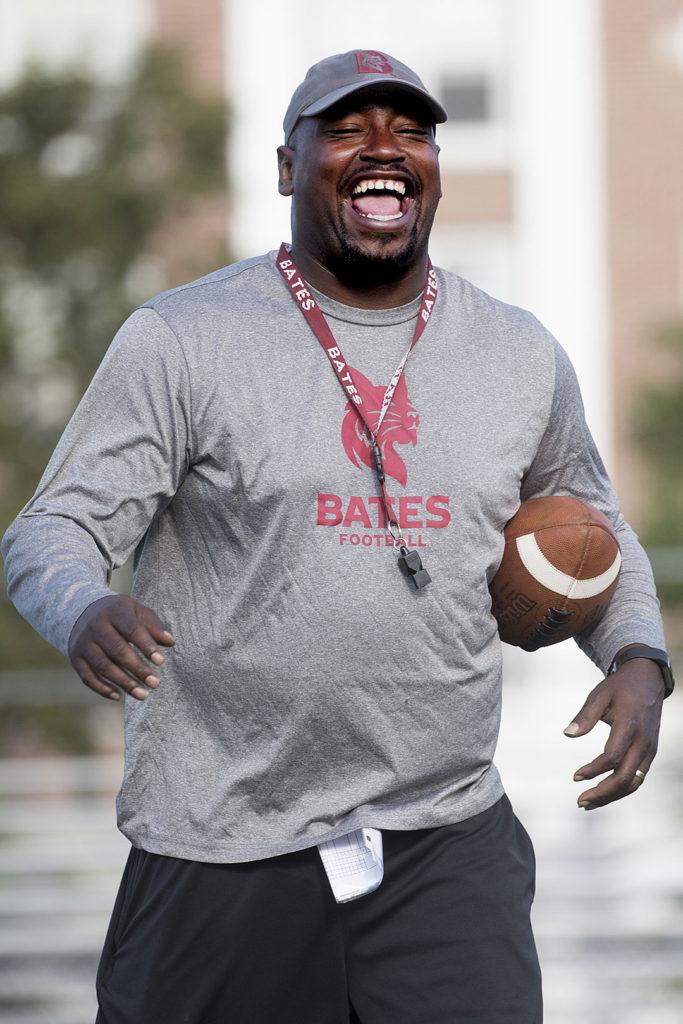 Last year marked Head Football Coach Mark Harriman’s 20th and final season. The Bobcats capped off Harriman’s final season with a record of 2-7. Their only two wins were against Bowdoin and Colby, granting them the state of Maine CBB title.

While the team was unable to defeat any other NESCAC school, they could count on this Maine victory to define the success of their last season with Harriman.

This year, the team is off to a tough start. As of Oct. 20, they hold a record of 0-6. However, their most recent loss was only by one point; the Middlebury Panthers narrowly defeated the Bobcats 35-34. During this game, Bates’s offense recorded a season-high 354 total yards. Thirty-four points were scored, which is the most the team has obtained since 2014. This tight game signifies the rise of new leadership and potential for Bates football.

Former University of Pennsylvania defensive line coach Malik Hall was named the 20th head football coach in Bates history on June 18, 2018. Hall served as the defensive line coach at Penn since 2015. His team won back-to-back league championships in 2015 and 2016 and he coached four All-Ivy players and a top of the league defense.

“I really believe that Coach Hall has already made a positive impact on the football culture at Bates,” Martin Guinee ‘19, a senior offensive lineman, said. “In comparison to the past three years, there has been a lot more ‘juice,’ a word that is frequently used at team activities. I’m extremely hopeful about the future of Bates football under Coach Hall and his staff’s leadership.”

“The football guys led me to Bates,” Hall laughed. “My time at Penn prepped me like no other for this experience. Being at Penn, I got to see what student-athletes can achieve every day. A very high achievement is expected of them in and out of the classroom. There are a lot of positives in the prospects and potential in what we can make Bates football.”

Hall’s main goal for his new role as head football coach at Bates is to use the success he achieved at Penn and help the team see that they are a team capable of winning more than just the CBB. While their record is rocky, the level of play, particularly against the close game against Middlebury, epitomizes the resilience and grit that Hall looks to bring out in this team.

“There is no better way to get to know people than going through adversity,” Hall said. “You find out what people are made of and more about their character and grit. Normally, you use the off-season to do that, but since we have only known each other for about 50 days, we are using the trials of the season to get better acquainted with each other. Once we have a full grasp on who we are as players, we can coach the person, not the product.”

During his time coaching the Bobcats thus far, Coach Hall has already noticed that these guys play with an “underdog mentality.”

“I have noticed that these guys have latched onto an underdog culture,” Hall said. “Nobody aspires to be average, and to aspire to be an underdog is to suggest that they are okay with being average. An underdog mentality should not be the lifestyle. It should be the fuel. We want other NESCAC teams to know that we are prepared and coming after them.”

Their pride in the season falls to the CBB title as opposed to that of the NESCAC championship. Therefore, one of Hall’s main goals is to switch this mentality around. Before the close loss against Middlebury, the Bobcats had scored a total of 57 points, an average of 11.4 points per game with a record of 0-3 at home and 0-2 away. While these numbers do not look stellar on paper, Coach Hall is optimistic that he can optimize the strengths that he has noticed in the games and improve upon these stats in the future.

“[Before Midd.], we were 0-5 and I would say during three out of the five games our guys showed what it means to give maximum effort and have a great attitude about the sport,” Hall said. “I think they also understand that good is the enemy of great. To be great, you have to be good and there are good moments in front of all of us. We are understanding how hard it is to win and how difficult it is to be good, because if good is our enemy, we haven’t beat them yet. But we will.”