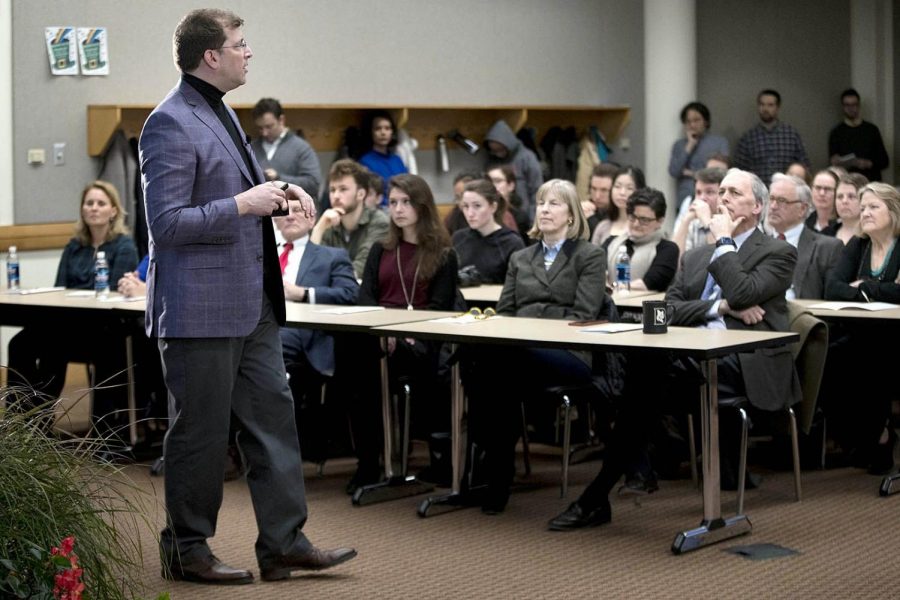 Former Chair of the Digital and Computational Studies program Matthew Jadud give the inaugural address, discussing his plans for the future of DCS

On Wednesday March 21, 2018, Professor Matthew C. Jadud delivered his inaugural lecture, “It Begins with a Step” to celebrate the generous donation and contribution the Colony family has given towards founding the Bates Digital Computational Studies Program (DCS). Jadud has been inaugurated as the Colony Family Associate Professor of Digital and Computational Studies and currently serves as the chair of the department.

“The story of the Colony family and DCS at Bates is a story about the transformative power of philanthropy” began Clayton Spencer in welcoming the attendees, “the magic that happens when a visionary, and incredibly generous family of donors decide to get behind a project that is crucial to the future of a college, in this case our wonderful college.”

The Colony family has been no stranger to Bates over the last two decades. Ann and George Colony have three sons, two of whom have graduated Bates, William ‘12 and Charles ‘17. They also have a niece Zola Porter Brown ‘93 and nephew Joel W. Colony ‘06 who attended Bates as well. George Colony is the founder and CEO of Forrester, one of the most influential business and advisory firms in the world.

“The first thing you should know is that George Colony was not a passive investor in DCS,” said Spencer. Early on in her tenure at Bates, she paid a visit to Forrester to talk to Colony.

“So early in the conversation I managed to blurt out that Bates does not teach computer science,” continued Spencer. “Now it was my impression at the time that this came as news to George, who seemed to be quickly rethinking whether his son Charlie had made a good decision.” Colony then turned to Spencer and asked some questions about Bates’ plans for DCS. As Spencer recalled, “The most vivid of which were these, ‘Are you thinking of making a straight computer science program? Or are you going to take on the question of how Digital and Computational methods are infusing with a wide variety of fields?’”

Years after Spencer’s initial meeting with George Colony, Bates has lead an initiative to create a DCS program focused on inclusivity and the liberal arts values.

During his speech, Jadud listed some of the exciting accomplishments students have done for the DCS classes offered.“The students have been engaging with virtual reality, creation of interfaces for dance and music, the students have stepped up to engage in summer research…and we’ve been working at the Bates Morse Mountain Conservation area engaging with various environmental questions in terms of sensing and drone imaging. So it’s just been an incredible group of students to dive in with.”

Before Bates, Jadud taught several interdisciplinary courses including “Storytelling through Computer Animation,” “Building Better Apps,” “Entrepreneurship and Hardware Design.” At Bates, he currently teaches “Design of Computational Systems” and “Nature of Data, Data of Nature.” During his time here he has also worked in collaboration with the Dance Department.
“I had the great pleasure of working with Bill Matthews and Rachel Boggia and what we had the opportunity to do through the inspiration of Shony [Shoshana] Currier—the new director of the Bates Dance Festival—she asked us if there a way to bring artists whom I’ve had the pleasure of working with, who do some really incredible work around integrating data and code and technology into performance and the creation of digital music? Can we bring that to our students?’ And we said, ‘Sounds crazy. Let’s do it!’”

His students came together to meet the challenge and were successful in doing the hardware and the programming necessary for making sensor on the bodies of dancers that transmitted the data to musical composition systems, which created digital music as the dancer danced.

However, Jadud has bigger plans when it comes to integrating DCS into the broader liberal arts context. During the “What If?” portion of his talk, he asked several questions that indicated his future intentions for the program. He first asked, “What if we don’t have a major? What if we have a minor in DCS?” Indeed, Jadud hopes that in keeping DCS a minor, students will have the tools to engage with technology in other fields.

“What if Art and English say ‘It would be really cool to work with DCS and develop a major in the Digital Humanities.’ We can draw from courses we already offer, and we can think about new courses that we can develop in collaboration with DCS to anchor that and give a name to computation embedded in the humanities,” said Jadud.