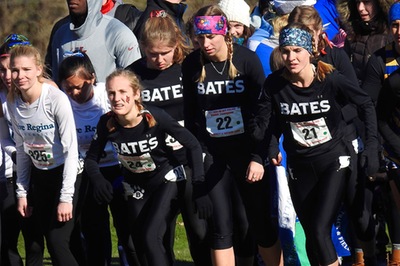 Women’s cross country runners get ready to take off.

This Saturday, November 11, the women’s cross country team competed in the NCAA Division III New England Regional Meet in Gorham, Maine on the Gorham Country Club golf course, the home course for the University of Southern Maine. Out of 56 teams, Bates finished in an impressive fifth place, thanks to an outstanding team effort from the seven competing runners. Their team total was 150 points, and since cross country races are won with the fewest points, their score was 33 points better than the sixth place score of Amherst College (183), and 17 points better than their total from last year’s Regional Meet (167), showing some solid team improvement this year.

Leading the Bobcats on this six kilometer course was senior captain Katherine Cook ‘18, who finished in fourth place overall with a time of 20:44.7, which gained her the title of All-New England, since her place was in the top 35. When asked about her performance, Cook actually opted to talk about her team instead: “This is one of the most talented and supportive teams I’ve ever been on, and I just feel so privileged to have been a part of that.” Her great race reflects the positive cross country experiences she has had all season.

Cook was not alone on her team in earning an All-New England title: Ayden Eickhoff ‘19 placed 29th with a time of 22:11.8, while Abby Hamilton ‘21 nabbed the 35th spot by racing 22:16.6. Rounding off the top five were Katie Barker ‘19 in 41st at time 22:23.9 and Olivia LaMarche ‘20 in 45th with 22:25.6. As shown by their times, the Bates runners used a pack strategy, determined to try to stay close to their fellow racers and motivate each other to keep pushing together. Also contributing to the team effort and spirit were the Bates displacers, or the 6th and 7th finishers on the team. Sarah Rothmann ‘19 placed 57th at 22:35.5, and senior captain Mary Szatkowski ‘18 placed 92nd at 23:16.2. All Bates racers finished in the top 100 in this large race of 393 runners.

The conditions were less than ideal, with wind-chill causing the temperature to feel like it was in the low twenties. However, the wind and cold were not going to stand in the way of these determined Bobcats. “We were mentally prepared for the cold coming into it, and so we were able to tough it out during the race,” says Barker.

The cold also failed to keep Bates spectators away, who came to support the team in their race. Parents, students, alumni, and even dogs represented the Bates spirit and cheered on the runners as they gave their all out on the course.

One of the most impressive parts of the race was the topography, which was far hillier than most golf course races are. The racers fought valiantly against the difficult terrain, working off each other to navigate and endure the twists and hills. This course was a challenge, but it was one that these Bates runners were ready to face. Rothmann states, “The course was really fair, and because we have trained at Pineland, we were prepared for any hill that would come. We worked really well together and that let our team perform competitively.”

Unfortunately, the fifth place finish did not result in the team moving on to compete at the National Championships, yet this Regional meet was still an inspiring end to an exceptional season. Also, Cook’s fourth place finish has gained her an individual spot in the National Meet, and the team will continue supporting her in this effort that will take place on Saturday, Nov. 18 in Elsah, Ill.