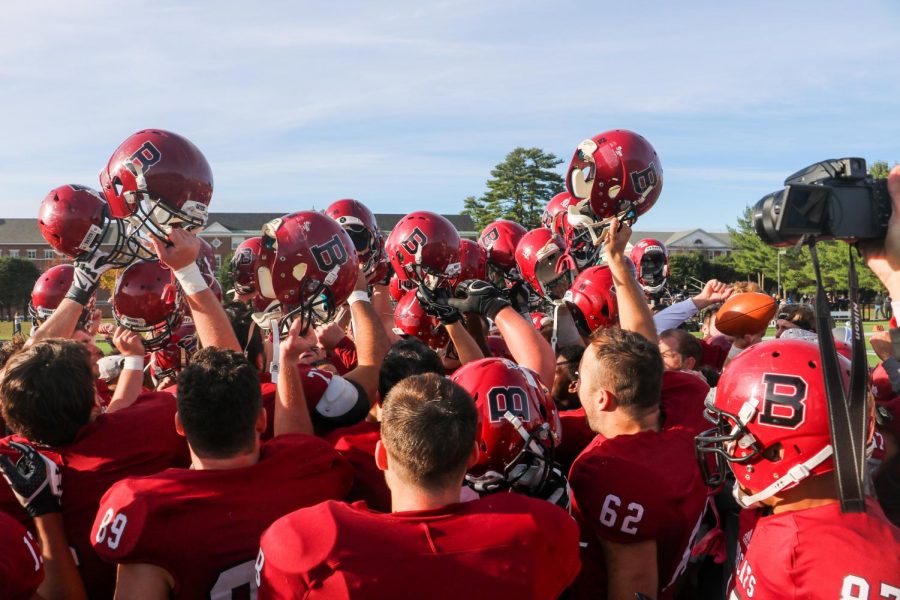 “It was an unreal feeling to be a part of the history that was made Saturday. I’m so happy for the seniors earning four straight CBB titles. It’s an honor to be on the field with them every Saturday,” first-year Brendan Costa ’21 adds.

Bowdoin would strike first, their kicker, Andrew Sisti, hitting a 22-yard field goal to put them up 3-0 with 4:42 left in the first quarter. But Bates responded right away with a one-play, 70-yard rush by first-year speedster quarterback Costa, who has a knack for these runs as this marks his second 70-yarder this season. DeWald made the extra point to give the Bobcats a 7-3 lead with 4:28 left in the first quarter.

Only three points were scored in the second quarter which came late in the first by the Bobcats.   Bowdoin drove 84 yards from its own six-yard line near the end of the first quarter to the Bates 10 early in the second, but the Polar Bears turned the ball over on downs as their quarterback, Robert Kollmer, was stuffed on three straight plays, including a fourth-and-inches stop made by junior Tyler Harrington and senior Collin Richardson, which preserved Bates’ lead 10-3. The Bobcats made the most of their possessions as they only ran 19 plays compared to Bowdoin’s 44.

Bates ground and pound methods did not stop in the second half. Ripping off runs of at least five yards in the first four plays helped wear the defense down and set up first-year Jaason Lopez’s 37-yard scamper for a touchdown. Bates led 17-3 with 13:46 left in the third. Bowdoin responded two possessions later, taking over at the Bates 46 and driving 46 yards. Quarterback Noah Nelson’s 21-yard scamper on a 3rd down up the right sideline nearly earned the touchdown but the quarterback was pushed out at the 3. Bowdoin backed up five yards on a false start penalty, but Nelson made a great play on first and goal from the 8, scrambling out of the pocket and finding his target Gregory Olson crossing through the back of the end zone. Sisti’s extra point brought Bowdoin to within 17-10.

A strong rushing attack by different players and an unnecessary roughness penalty against Bowdoin helped the Bobcats march down the field, capped off by a 1-yard run by junior Kyle Flaherty to put the Bobcats up 24-10 with 14:33 left in the fourth. A turnover at the Bobcats’ own 26-yard by the Bates punt team gave Bowdoin another chance on which they capitalized. Nelson connected with Olsen again to bring the game closer at 24-17 with 13:23 left. No more scores were made by either side as Bates was able to seal the deal with an interception by first-year cornerback Devin Clyburn with 1:15 left.

Run first, ask questions later was the mentality of the Bobcats. Costa rushed 20 times for his 170 yards, his fourth straight game with 131 or more yards. Lopez added 79 yards and a touchdown on six carries and senior captain Frank Williams added 63 yards on eight carries. Bates averaged 6.7 yards per carry on the day.

On the defensive side of the ball, free safety Jon Lindgren ‘20 was all over the field for the Bobcats, finishing with 16 tackles (11 solo) and six pass breakups, the most by any Bobcat this season in either category. Lindgren was also relevant in the special teams, blocking a 40-yard field-goal attempt by Sisti on the opening series of the game. For his great play Lindgren received the honor of NESCAC Defensive Player of the Week. Senior linebacker Max Breschi also had a great day for Bates with 11 tackles, including 2.5 sacks and a forced fumble.

The CBB champions will look to close out the season on a high note as they travel to Hamilton Saturday November 11 at 1 p.m.