Whether she is on the field saving goals for her soccer team or analyzing films for her senior thesis, Sarah McCarthy ‘18 always puts forth her best effort and is eager to better her academic and athletic abilities.
McCarthy, a Rhetoric major with a concentration in Screen Studies, was recruited for the women’s soccer team her senior year of high school. Even after having played soccer since the seventh grade, coming in as a first-year from Rockville-Centre, New York, McCarthy admits that she was definitely a little timid and had trouble adjusting from her high school and club programs to Bates’ team. Nonetheless, McCarthy, was unexpectedly thrown into a starting role as a first-year, forcing her to immediately break free from her shell. Since her first season as a starting player, McCarthy has flourished as both an athlete and a student.
“McCarthy has become an incredibly vocal leader amongst her teammates,” says head coach Kelsey Ross. “She understands the x’s and o’s of the game and has become a coach on the field which is invaluable in the game of soccer. She isn’t afraid to challenge her teammates – which can be uncomfortable – and that’s a testament to her leadership maturity over the years.”
“Throughout high school I had always loved making a great save. Now, just getting to know my teammates better and having more time to work with Coach Ross, I feel like I have a great relationship with Bates’ team,” McCarthy says. “A big goal for my fellow seniors and I is to just keeping building a solid team dynamic because it is helpful when everybody really wants to work hard for each other. That is what I really appreciated and thrived on as a first-year.”
During her first season on the team, McCarthy started in nine games and made 46 saves. By her sophomore year, she started in goal during all sixteen matches and placed first in the NESCAC in saves with an impressive grand total of 98. Those 98 saves included three shutouts and six wins. Last year, she also started all fifteen games in goal and placed fourth in the NESCAC in saves with a total of 75.
Now a senior captain for the 2017 season, for the first time in her goalkeeping career at Bates, McCarthy has already been named “Bobcat of the Week” and “NESCAC Player of the Week”. These titles were well earned after her tremendous job in goal during the games against Wesleyan University and Williams College on Saturday Sep. 23 and Sunday Sep. 24. During the game against Wesleyan she made a career high of 17 saves and against Williams she did not let in a single goal, marking her third shutout of the season and eighth of her career.
“[McCarthy] has created a standard of intensity in our training and games that separates on versus off-field relationships with her teammates,” Coach Ross says. “On the field she’s the first teammate to get on someone. Off the field she is far more likely to be joking. She’s worked to have quality relationships with her teammates off the field so that is well received by people.”
“I definitely think there is always a little bit of jitter about not want to let the team down,” McCarthy admits. “As goalkeeper for this team my main focus is that I want the opportunity to let all of my teammates shine. To accomplish this, my job is to keep us in the game.”
Off the field, McCarthy can be found watching and writing about films for her senior thesis. After taking a course on race and mid-century media her first year at Bates, she decided that film and television were areas of study that she was passionate about and wanted to pursue further by majoring in Rhetoric with a focus on Screen Studies. McCarthy continued on to take Professor Jon Cavallero’s “Film Theory” and “Constructions of Italian-American Masculinities” courses. She is now working with Professor Cavallero for her senior thesis, studying how 9/11 has shaped representations of Arab-American and Middle Eastern characters in film. She will be focusing on two films: The Siege (1998) and Day of the Falcon (2011).
“Before coming to Bates, I had never really considered the impact that film had on people and how different representations can actually shape people’s ideas,” she says. “Taking these courses I realized how impactful the media is for everyday citizens and I really want to study that further.”
McCarthy translates her leadership abilities and strong work-ethic as a senior-captain and starting soccer goal to her thesis work with Professor Cavallero.
“Jon is really supportive of me as a student and an athlete,” McCarthy says. “During one of our early thesis meetings, the whole department was there and one of the professors came in and was like ‘Hey Bobcat of the Week!’ Then, Jon came in and was like ‘No, it is actually NESCAC Player of the Week, too.’ It was really great.”
“Sarah is such a dedicated and hard-working student,” Cavallaro says. “She has already submitted a couple of chapters for her thesis and I am looking forward to seeing how her thinking evolves throughout the course of the semester.”
After graduation, McCarthy hopes to get a job as a Production Assistant or some sort of Writer’s Assistant. The Director’s Guild Training Program is also on her radar as a potential possibility. Regardless of where she ends up in the film and television industry, she will also be playing soccer recreationally or maybe even coaching part-time.
McCarthy’s next game is Saturday Oct. 7 at Connecticut College. Even if you are unable to make this game, be sure to follow this talented goalkeeper’s season because she is clearly a student-athlete not to be missed. 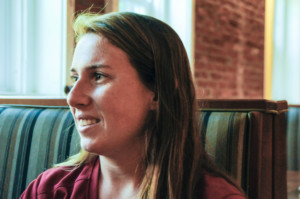