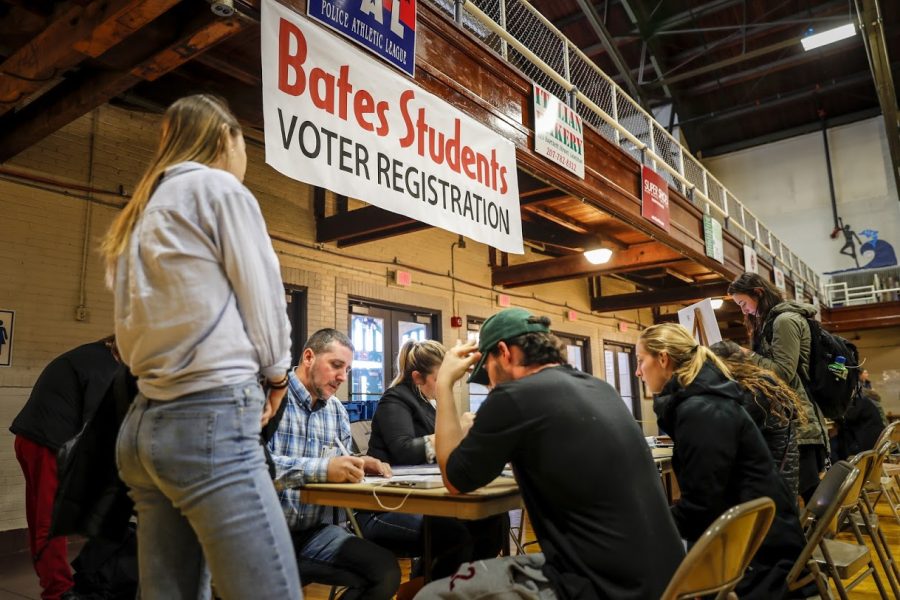 Interestingly, Bates boasted a high registration rate of 71% – but those numbers weren’t reflected in the polls. The data also elucidated that 41.9% of eligible female students at Bates voted as opposed to 38.7% eligible male students.

Among those disappointed by this report were the staff at the Harward Center for Community Partnerships. I spoke to Peggy Rotundo, the director of Strategic and Policy Initiatives, and Brenna Callahan, a recent Bates graduate and a Civic Leadership Fellow for the Center.

The Center was tremendously disappointed by the statistic, especially given the impressive registration rate Bates was able to achieve this past year. In fact, the college won the 2016 “Voter Reg Rumble” – a statewide contest where institutions at different levels compete to get the most students registered to vote – hosted by Maine Secretary of State Matthew Dunlap.

“But then we got these numbers,” remarks Callahan, “and saw that only 43% of our students voted. So it was interesting to see such energy around registration – but then only about 60% of those [students who were already registered] actually voted.”

Still, they refuse to relinquish their efforts to increase political engagement and numbers at Bates – in fact, the Center is galvanized. “We’ve always worked hard to do nonpartisan voter registration,” says Rotundo, “and the fact that we had such a low percentage of our student body voting in the 2016 election made us even more motivated to get students registered to vote.”

Along with direct voter registration, the Center is working on long range efforts to improve political literacy around the school, such as on-campus policy debates and initiatives to educate the student body on ballot questions and local candidates.

For National Voter Registration Day this Sept. 26, the center will be teaming up with student groups all week to register students. Students will be able to come to Commons starting Monday, Sept. 25 all the way through Friday, Sept. 29 and will be provided with instructions on how to fill out the short voter registration card.

Students may register to vote in Maine or in their home states, and must provide the last four digits of their Social Security number if they do not have a Maine driver’s license or state I.D. The process generally takes a few minutes.

The Bates College Democrats are a group similarly distressed by the numbers articulated in the study. While the club itself has a partisan lean, the club’s president, Megan Currie, stressed that party alliance was immaterial in the context of maximizing voter turnout.

“Obviously, I’m the president of the Democrats, so I tend to vote a certain way,” started Currie, “but I don’t care which party [students] register with when they vote. I just want them to vote, and to show up on election day.”

The group is particularly energized to improve student voter turnout for the November 7 municipal election, where Lewiston residents will have the chance to vote for a new mayor.

Max Gardner, a member of the Bates Democrats’ board, noted that “as citizens, voting is our most effective tool to express our feelings towards government and elected officials.” Gardner expressed hope that Bates students would channel frustrations over the incumbent mayor’s administration into action, stating that “it seems like there is discontent among many Bates students with some of the policies of our current mayor, Robert MacDonald, so I hope that these students take advantage of this incredibly consequential tool and vote this year.”

As national voter registration and a crucial local election looms in the very near future, Bates students have only one basic responsibility: to show up.