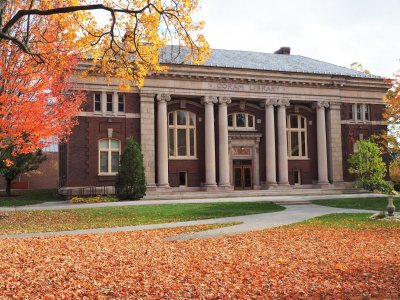 At Bates, myths about secret underground tunnels abound. Perhaps because it’s so darn cold to walk anywhere in the winter. Many are theorized to exist: Lane Hall to PGill. Lane Hall to Hathorn. Nash House to the Barn. Commons to your dorm (only dreamed of). Bardwell’s basement to Lewiston Variety. Yellow House’s basement to a sinkhole. The list goes on.

However, the most widely discussed tunnel today is the one rumored to connect Ladd Library to the adjoining Coram Library. When I asked Ben Cuba ’16, studiously sharpening his pencil on Ladd’s first floor, about the purported tunnel, he responded immediately. “Oh yeah,” he said, pointing his pencil towards the mélange of stone and brick paving that sits between the new and old libraries. “This place has gotta cover something.”

“Where do you think it goes?” I asked.

“To the bomb shelter,” Cuba responded. “Where else?”

As with any institution that has been around since the Cold War, there have been rumors for years about a bomb shelter on the campus. An article in the December 7, 1973 edition of The Bates Student referred eleven times to an “infamous bomb shelter” and alleged that it was hidden in the basement of Lane Hall for the President and Trustees’ personal use. However, an October 1976 Student article entitled “Let’s Explode the Bomb Shelter Myth” revealed that what was long rumored to be the shelter was disappointingly the Lane Hall mailroom.

Since the bunker-busting of that theory, however, speculation fell upon another Cold War era construction, the architecturally confounding Ladd Library, completed in 1974. Its odd brick structure is the embodiment of sturdy, and its basement backs directly up to the elegant and majestic Coram Library, itself built in 1902. Nine other students I spoke to said they thought Ladd’s deep bowels held some sort of secret, and hypotheses were many. A tunnel to Coram? A bomb shelter? A top secret archive? “Where they store confiscated hard alcohol,” one student suggested wryly. I set out to investigate for myself.

Tipped off by an informant behind the Circulation Desk, I descended to the Periodicals section, the rectangular zone which looms above the Basement’s main study area. The deeper I delved, the more the aesthetic changed from Ladd’s typical bland three-color chic (garnet, forest green, red oak wood) to that of a Reagan-era bunker. The brick walls were painted with sterile white paint that curled from years of inattention. Pipes and metallic cross-beams crisscrossed the walls. Gray utility boxes with scientific names such as “Panel Top Cir. #7” and “Gas Ctl. #6” popped out from all directions. The traditional wood of Ladd’s stacks gave way to gun-metal gray shelves, claustrophobically packed together.

I squeezed past a rusting thermometer on the wall that read 63 degrees. Who needs a thermometer in a library? Holes in the wall were stuffed with stringy yellow tufts of insulation. Was I in a library or an industrial warehouse? My heart started to pound. A piece of graffiti—scrawled on the wall by some poor soul who had likely wandered down unwittingly thirty years ago and never escaped—cried Destruction is a Form of Creativity! At best, this place could be a bomb shelter. At worst—a tomb!

At the end of a row of long-forgotten periodicals (like the bafflingly named American Review of Reviews, 1928-1934), I hit the jackpot! My heartbeat accelerated as I turned a corner to find a metal door built suspiciously like a bank vault’s. It was huge, green, and  had triplicate levels of security: a traditional lock, a keycard scanner, and impressively, two fire alarms. A sign read in bold letters, “Emergency Exit Only: Push Until Alarm Sounds.” Very fishy. What are they hiding? I pushed my ear against the cold metal. Only a tantalizing silence from the other side. If there was a secret bunker or tunnel, it had to be here.

I wasn’t about to be foiled by a locked door, I thought, as I hastily ascended to the fresh air. I had done some prior research in Muskie Archives and had found mentions of a structure called the “fishbowl”—an extension to the back of Coram built in 1947. When Ladd was completed, its basement swallowed the Fishbowl whole and integrated its walls, which give the front of the Periodical section its distinctive brick-window appearance. I harbored hopes that the architects had left some sort of connection to get me through that door.

Exiting Ladd, I jogged over to Coram Library. Even though Coram is home to some of Bates’ most modern technologies—including a 3-D printer and a device with the descriptive name of Nikon Stereoscopic Zoom Microscope SM71500—the building still feels irrepressibly old. It classical façade speaks to old-world elegance, and its front doors still have anachronistic wrought-iron gates engraved with a royal European fleur-de-lis pattern. There had to be something hidden down there.

I’d never been in the basement of Coram, and from the sound of it, neither have most other people. Julie Retelle at the Library’s circulation desk informed me that in ancient times some student clubs used to meet down there, but no longer. Multiple staff and faculty members who have offices in Coram’s quiet second floor said that they only went down there if compelled. “I just go down there to use the bathroom,” said Matt Duvall, Imaging Center Manager. “It’s not a very pleasant space.” Intriguing.

Upon descending the stairs, I found out why. Ladd’s periodicals were spacious compared to Coram’s cramped intestines. The only light came from the windows two floors above, illuminating the dust piling up on the floor. There were doors all around. I tried rusting handle after handle. All locked. Finally, after fumbling my way past a pair of freezing 1950s-era bathrooms, I reached an open door.

It creaked open, and I found myself in a pitch-black, crypt-like hallway. Pipes and boilers ran alongside the wall. On the ground was a mammoth machine that looked like an ancient steam engine, with broken pressure gauges and funky spouts. Funky. As I felt my way along the wall, I realized that it was made of the same white-painted bricks in Ladd’s bunker of a periodical section. Was I getting warm?

In my zeal to examine the wall, I failed to see the set of metal stairs that appeared at the end of the hallway. With a Clang! I tripped down all six, ultimately slamming my shoulder on the dusty ground. I cursed to myself as I reached for my iPhone and flipped on the flashlight. The floor around me was filled with substantial tumbleweeds that had taken up permanent residence years ago. My eyes widened, however, when I looked in front of me.

I had landed directly in front of a large blue door with a massive bronze handle. I pulled the handle. Nothing. However, my heart leapt as I gazed at the security safeguards running alongside the door’s frame: One lock! One keycard scanner! Two fire alarms!

Was this forgotten portal the fortress-like door that I found in Ladd’s Periodical section? Had I found the secret passageway between the libraries, or was I just delirious from all this time underground? I’d gotten so twisted around in the basement that it was impossible to tell which direction was what. If I had to guess, that door likely holds the key to the Ladd-Coram tunnel myth. However, as my informant at the Circulation desk reminded me later with a smile, there are many more locked doors in the basement of Coram and Ladd. Are there many more tunnels or other hidden treasures? I guess you’ll just have to find out for yourself.